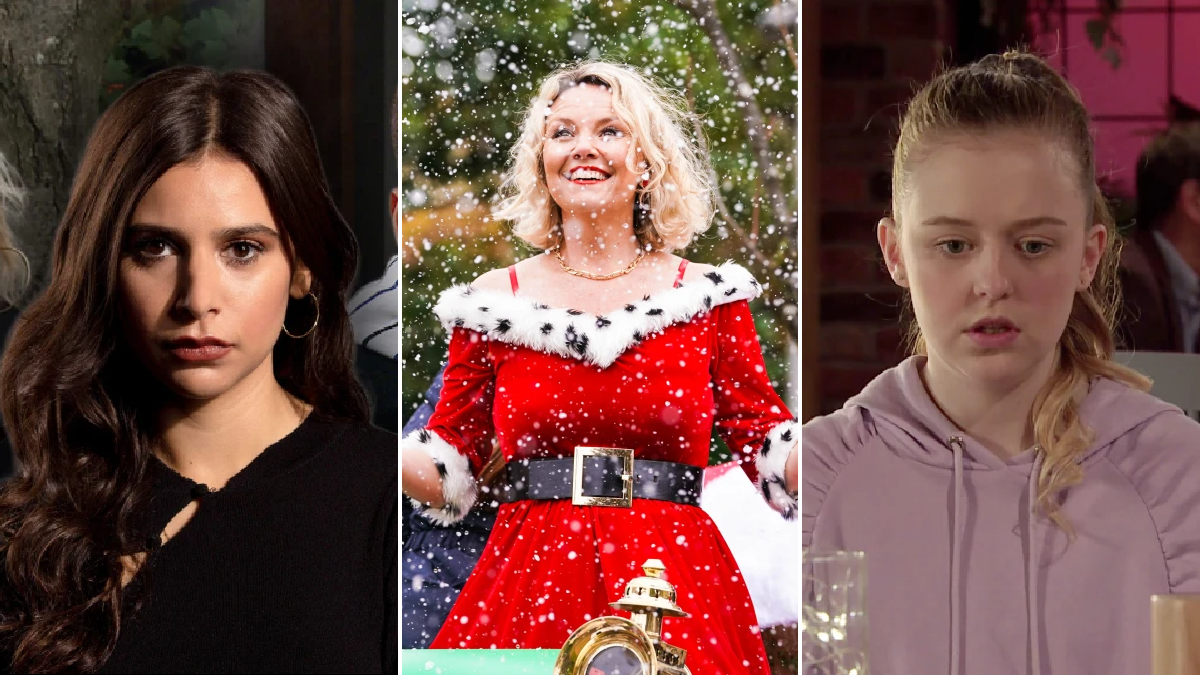 Settling down to our favourite soaps is an important part of the Christmas celebrations, and there’s a lot of drama ahead for the characters of EastEnders, Coronation Street and Emmerdale.

Make sure you don’t miss any of the twists, turns and festive fun in store with our handy guide to what’s on and what happens over the Christmas period.

Our three festive trips to Walford start on Christmas Eve with an 8pm visit to Albert Square. On Christmas Day you can watch at 9:35pm and the Boxing day episode airs at the later time of 10pm.

Whitney (Shona McGarty) is desperately trying to stop Chelsea making a huge mistake by marrying Gray, but first she needs to get some proof of what kind of man he really is. Will Chelsea believe Whitney and call off the wedding, and is Whitney risking her life by exposing Gray’s misogynistic and violent behaviour?

Meanwhile, will Jack make it to the altar as his pursuit of Phil Mitchell (Steve McFadden) gathers momentum, or will Denise be left on her own?

Janine (Charlie Brooks) is up to her old tricks again as she manages to overshadow everyone else’s Christmas by making it a day that Scarlett (Tabitha Byron) – and the rest of the Square – will never forget. She also tries to make it a day Mick Carter (Danny Dyer) will never forget. Will he be able to resist Janine’s flirtatious attempts, or will she manage to drive a wedge between Mick and Linda for good?

You can catch up on all the action in Weatherfield at 8:30pm on Christmas Eve, 8pm on Christmas Day (in an hour-long episode) and 7:30pm on Boxing Day. The episodes are also available to stream from 7:00am on the day they’re scheduled, on the ITV Hub.

There’s also a big Christmas wedding planned for Corrie, but it could be set to end in heartbreak for Emma (Alexandra Mardell) as she discovers that Curtis (Sam Retford) isn’t what he seems. Will she be able to forgive him, or will it be curtains for Curtis?

Meanwhile, Abi (Sally Carman) returns from her honeymoon with vengeance in her heart. A spokesperson commented, ‘Still struggling to comes to terms with murder of her son Seb, Abi turns all her hatred on Kelly (Millie Gibson). As she vows to drive her out of the street, Kelly starts a descent of her own.’ Will Kevin (Michael Le Vell) be able to help his new wife see a less destructive path out of her pain?

Nina (Mollie Gallagher) is also suffering following the loss of Seb, but she’s trying to move on with Asha (Tanisha Gorey)’s help. As Nina struggles to deal with her anxiety, Carla (Alison King) becomes her fairy godmother, ‘giving Nina the gift she so badly needs,’ according to the spokesperson.

Tyrone (Alan Halsall) gets a bit carried away with the festive spirit when Fiz (Jennie McAlpine) and the girls spend Christmas with him. ‘Tyrone’s caught up in the moment and makes a pass at Fiz, says the spokesperson. ‘Could this be the moment they’re reunited or has Tyrone seriously misjudged his kiss?’

And will there be peace and love around the dinner table when the Platts and Barlows all sit down for a big Christmas meal together? Somehow that sounds highly unlikely.

It’s easier to keep track of Emmerdale, as the show will air at 7pm on Christmas Eve, Christmas Day and Boxing Day. The Christmas Day episode is an hour long. The episodes will also be available to stream from 7am on the day of transmission, on the ITV Hub.

A spokesperson told us, ‘It’s the season of good will, but the underhanded Al Chapman (Michael Wildman) goes sparing on dishing out any joy, particularly when he is feeling under so much pressure. Will Al find a solution for his financial problems or could his world collapse?

‘The sense of a threat from within the Village still looms large, but is it now Dawn (Olivia Bromley) who needs to watch her back? And could there be other villagers in danger before the week is over?’

And when the Emmerdale villagers wake to a dusting of fresh snow on Christmas morning, things are not quite what they seem and shocks abound. ‘It is soon apparent this will be a Christmas the villagers will never forget, leaving some things changed forever,’ says the spokesperson.

Grab the choccies and the sherry and settle down for what promises to be a spectacular three days of soap drama.