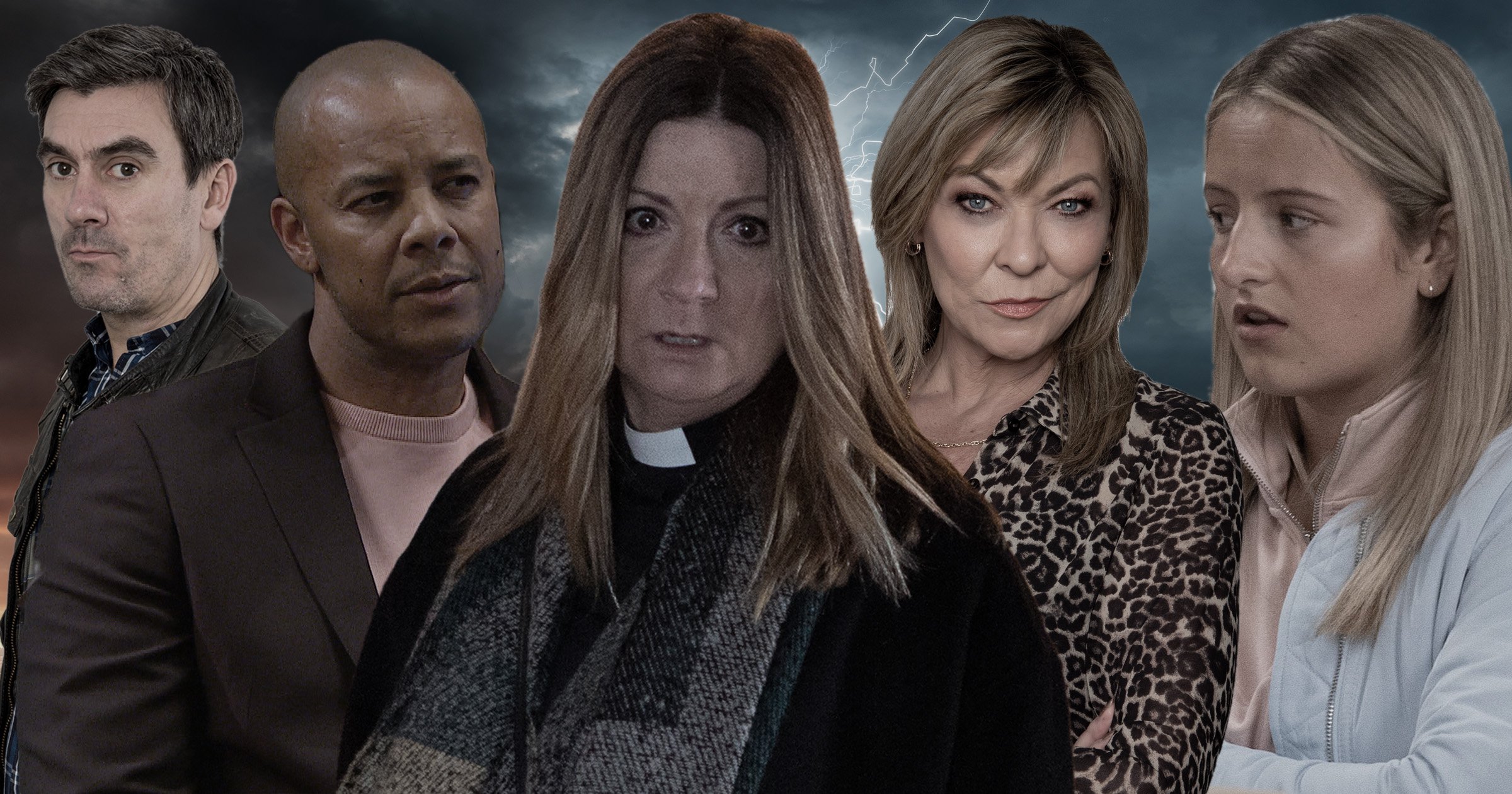 Death is set to rock Emmerdale village in a catastrophic disaster, as the long running soap celebrates its 50th anniversary with a huge storm.

With a previous storm killing Tricia Dingle, the scale of the upcoming stunt sequences has dramatically increased.

And show bosses have promised that there will be elements never seen in a soap before; including an aspect that can only be done in the village.

With winds picking up, get prepared for Hurri(Cain) Emmerdale; as the backdrop of Kim Tate’s (Claire King) wedding, Cain Dingle’s (Jeff Hordley) war with Al Champman (Michael Wildman) and Amelia Spencer’s (Daisy Campbell) leading to peril for all.

Producers have revealed that every character in Emmerdale will be impacted, with death and injury the order of the day, and assurances that lives and the community will be changed forever.

‘The big 50th week will focus on a massive storm that is going to rip through the village and leave an absolutely massive trail of destruction in its wake,’ boss Kate Brooks revealed to Metro.co.uk.

‘Some of our best-loved villagers will be in peril and it’s safe to say that literally the village won’t be the same after this. It’ll never be the same again because the impact the storm has on people’s lives is massive.

‘So that is our big set-piece stunt. Obviously throughout this we also have stories which will be massive and peaking across the month of October. Two big centrepieces are the Woolpack and Home Farm.

We are very keen to make sure we’ve covered all the different characters and that all the families who are in the village are affected and impacted in some way by what happens during the month of October.’

But how will it top previous Emmerdale stunt sequences, including last year’s rapids horror and maze fire?

‘There are elements of the big storm week that I’ve not seen on a soap drama before and it’s very exciting and nerve-wracking to be part of that and hopefully it’ll all be brilliant and it’ll all be absolutely fantastic when you get to watch the episodes.’

But naturally, comparisons will be made with the storm of 2004.

So is it a risk for Emmerdale to be running a similar concept a second time?

‘It’s fair to say that every story’s been done in soaps, we’ve done them all,’ fellow boss Jane Hudson replied.

‘One of the things we were very keen to do was firstly make sure our storm is in daytime so you can actually see what’s happening and what’s going on.

‘So the whole storm takes place in one day across about three or four episodes and it’s all in daytime. It’s very much a wind storm rather than a rain storm.

‘We’ve got some amazing wind machines being tested at the moment which are epic – the sound team are going to have a nightmare with them in the background!’

And Jane added that it won’t be a stunt sequence for the sake of it. The storm will be a catalyst for ongoing stories which are reaching their crescendo to be pulled together.

‘The stories are all driven by the characters and they all have an impact. The storm will feel incredibly different and it involves so many of our families.

‘It’s an element that, trust me, nobody’s done and no other soap could do it apart from Emmerdale, because of where we are. That’s a hint for you all.’

We’re going with flood, but who knows – only time will tell!

It may not just be the storm snatching lives either; as there could be a killer on the loose!

With one character facing the rest of the life in prison, Jane is absolutely not ruling out a murder taking place.

‘There is always potential for a murder in Emmerdale,’ came the next coy tease. ‘It’s Emmerdale, it’s famous for its murders. I can’t tell you but there’s normally a murderer lurking around a corner somewhere.

‘When we get to the end of October it might be the end of our celebrations but we will be ending that month with a storyline which kicks off a whole new story and potentially sees one of our characters looking at spending the rest of their life in jail.

‘I’m not going to tell you anything else about that story, but we are absolutely making sure that when our celebration month ends it’s just the beginning of a whole new chapter, particularly for one of our families.’

Who lives and who dies remains a closely guarded secret, but it’s clear that for whoever is left behind, the trauma from the storm is only just beginning.

Emmerdale will air its 50th anniversary episodes in October, across the whole month.