But who is she and what does she really want with Kate and Rana? Here’s the lowdown… 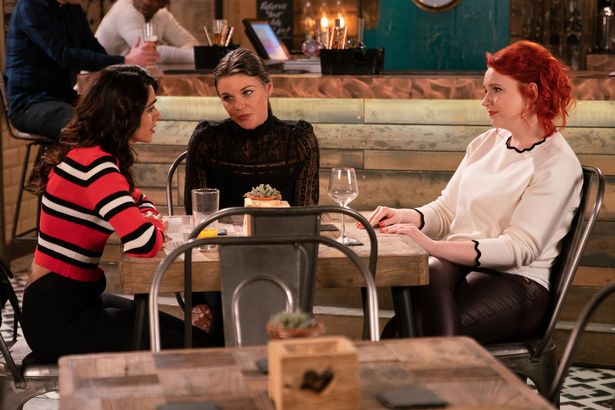 Who is Lolly in Coronation Street?

Lolly – whose real name is Lauren – is an old school friend of Kate Connor. She arrived unannounced at the Bistro on February 22 2019. Kate was thrilled to see Lolly, even though they hadn’t seen each other for years.

Lolly revealed she had split from her husband after he’d had a four-year long affair with another school friend of theirs.

She wrongly assumed that her invite to Kate’s wedding to Rana Nazir had been sent to the marital home which she’d moved out of.

Lolly is played by British actress Katherine Pearce who has also starred in Our Girl with Corrie alumni Michelle Keegan.

What does Lolly really want with Kate and Rana?

It’s not clear at the moment but she almost certainly will cause trouble for the pair.

Spoilers have revealed that Rana will become more and more frustrated as Lolly tries to take over their wedding plans.

Rana will even be left feeling like a third wheel when Lolly suggest they have a night out on the town together.

Is her plan to split the happy couple up? And will she succeed?