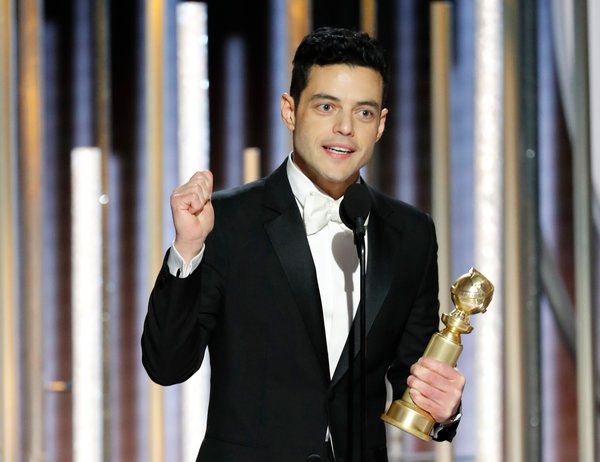 After a year filled with critically acclaimed movies from black directors like Spike Lee, Ryan Coogler and Barry Jenkins, the Golden Globes last night gave one of their two top film trophies to “Green Book,” a racial-issues film from the white “Dumb and Dumber” director Peter Farrelly.

The other top Globe went to “Bohemian Rhapsody,” which pulled off a rare best-drama win without a best-director nomination, a split that happened mainly because the director of this critically dismissed film, Bryan Singer, was fired from the project midshoot.

You can always count on the Hollywood Foreign Press Association, a quirky group of around 90 foreign journalists who vote on the Golden Globes, to make some left-of-center picks. (Hey, the Globes are gonna Globe.) But now that the dust has settled from the best-comedy-or-musical win for “Green Book” and best-drama victory for “Bohemian Rhapsody,” your Carpetbagger is left wondering whether these choices are as unlikely as they might have seemed on Sunday night.

Instead, should we treat them as emblematic of a mainstream sensibility that most moviegoers share? And, after recently seeking to reward more popular films, will the Oscars follow suit?

[Read about the highlights and lowlights from the Golden Globes.]

Before digging into these issues, I offer some caveats: The Hollywood Foreign Press shares only one member in common with the Oscar-voting academy, and the latter is a vastly larger organization, so one group’s choices do not necessarily line up with what the other is inclined to reward.

Still, much of award season is about momentum, and it never hurts to be seen winning. Voting opened for the Oscar nominations on Monday, and academy members weighing the crowded best-actress race will have last night’s terrific speeches from Glenn Close and Olivia Colman at the top of their minds. Moments like those can make all the difference.

Given that, how might the Globes have bent the trajectories of several key Oscar contenders?

Certainly, they offer yet more proof that “Bohemian Rhapsody” can actually penetrate Oscar’s best-picture race despite its well-known production problems. This biopic of Queen frontman Freddie Mercury has become a worldwide hit, and star Rami Malek, who also picked up a Globe for best actor in a drama, has chosen to address the Singer imbroglio mainly by not mentioning it at all. At the film’s first industry screening in October, Malek effusively thanked the producer Graham King for spearheading the project, the sort of plaudits a leading man normally saves for his director.

That recontextualization appears to have worked: The Screen Actors Guild and Producers Guild of America both nominated the movie, and after the Globes gave “Bohemian Rhapsody” even more momentum, it would now be a notable surprise if the film failed to make the best-picture lineup.

Still, it’s striking that “A Star Is Born” came up short on Sunday night, winning only the best song Globe for its anthemic Bradley Cooper/Lady Gaga duet “Shallow.” Given that “A Star Is Born” is a critically acclaimed story about show business that was also a huge hit with moviegoers, this film really ought to be steamrolling its way toward a best picture win. Yet year-end critics groups mainly gave it the cold shoulder, and the Globes followed suit. What gives?

Some of this may come down to campaigning. While Malek has shown up almost everywhere, happily spinning stories for interested voters, Cooper has proved to be a more recessive presence, and at many important events — like the star-studded Governors Awards in November — he was absent entirely. It has fallen to Gaga to do the lion’s share of schmoozing, and she has proved to be a warm and able campaigner, yet her authenticity was still called into question by Globe hosts Andy Samberg and Sandra Oh, who poked fun at Gaga’s tendency to repeat a single canned line about Cooper’s belief in her.

The “A Star Is Born” team hoped Sunday night would be a coronation; instead, they got a light roast.

“Green Book” and “Black Panther” didn’t compete in the same category at the Globes — the former won the best comedy-musical trophy, while the latter came up short in the best-drama race — yet I think the victory for “Green Book” helps explain why “Black Panther,” a cultural phenomenon, took no Globes. While this Marvel movie was a hit with critics, it’s still a superhero film, and industry voters may not be prepared to give that genre its top prize.

The fact-based “Green Book,” on the other hand, is so familiar in its contours that many have likened it to previous award contenders like “Driving Miss Daisy” and “The Help.” This period story of an Italian-American bouncer (Viggo Mortensen) befriending a talented black pianist (Mahershala Ali) also picked up Globe nominations for both of its actors — “Black Panther” managed none — as well as a win for Ali.

Both “Green Book” and “Bohemian Rhapsody” have found more favor with audiences than with critics, which is exactly the sort of skew the Oscars would prefer: Last summer, the academy infamously flirted with introducing an award for the best popular film, an attempt to pull focus from the critically acclaimed but underseen movies that often comprise much of the best-picture lineup. If “Green Book” and “Bohemian Rhapsody” are nominated for the Oscars’ top prize alongside “A Star Is Born” and “Black Panther,” the academy will be fielding its most populist slate in years.

And yet I wonder if the Globes’ real winner wasn’t any of those movies but “Roma,” Alfonso Cuarón’s black-and-white art film. Though it’s not the sort of contender that usually wins best picture — it was made in a foreign language and is distributed by the streaming service Netflix — many academy members love the film, and they may be even more inclined to give it their best-picture vote in the wake of Globe victories for “Green Book” and “Bohemian Rhapsody,” simply to demonstrate that the Oscars have a more highbrow sensibility.

At a time when the Oscar races often narrow, the Globes have done their part to keep this season wide open.