Lorraine Kelly welcomed royal commentator Russell Myers onto her ITV show today to discuss reports of a royal rift between Prince William and Prince Harry, as explored in Robert Lacey’s Battle of Brothers. The royal biographer detailed how the relationship changed between the pair after Harry met Meghan Markle and the couple’s subsequent decision to quit royal life. However, Lorraine slammed the Duke and Duchess of Sussex before noting they should have listened to Prince William.

Russell began: “This book goes into real detail about the feud we spoke about so long.”

The royal commentator explained the Duke of Cambridge asked his uncle Charles Spencer to warn Harry on making a huge decision about the future.

However, the Duke of Sussex reportedly “threw his toys out the pram”.

Russell said: “William shouldn’t be involved and it’s all led to the explosive nature of the relationship that’s in tatters now.” 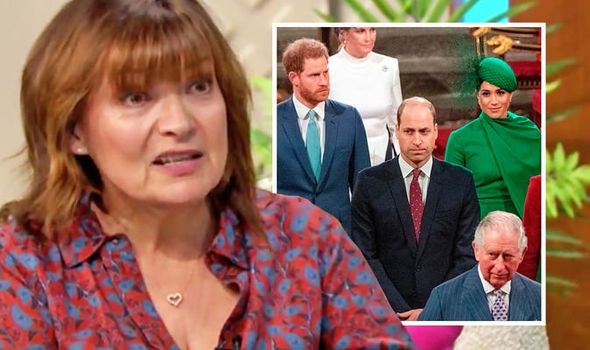 Lorraine replied: “It’s really sad. I don’t think it was a slur against Meghan Markle, it doesn’t matter who it was.

“He was saying, ‘You’re rushing into this,’ because look at William and Kate it took them ages.

“Remember they split up, they got back together, they took a long time because it is a hard job.

“And actually in some ways, William was right, it didn’t work for them.”