WrapWomen LA Blog: “I didn’t want to look like an actor trying to dance… I wanted to look like this person in the given circumstances,” the actress tells WrapWomen

Based on an infamous 2015 Twitter thread by former stripper A’Ziah “Zola” Wells, the film follows Detroit waitress Zola and a customer named Stefani who instantly bond over pole dancing. Within 24 hours of meeting, Stefani invites Zola on a road trip where the goal is to make as much money as possible at Florida strip clubs. What seems like a glamorous trip full of harmless “hoeism” quickly transforms into a 48-hour journey involving a nameless pimp, an idiot boyfriend, Tampa gangsters and other wild adventures along the way. 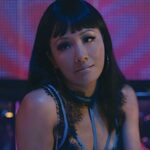 The actress also received some tips from Wells herself, who served as an executive producer on the film. “We just talked a lot and I got to know her voice and her spirit,” Paige said. “She’s just so funny and quick and smart. Her use of punctuation, like everything about her… she’s on some other s—.”

While Paige put a lot of preparation into the role of Zola, she was also able to take a lot from the experience, including a newfound sense of freedom. “Freedom to be a woman and love my body and my sexuality and not being also self-conscious or such a perfectionist,” Paige said. “Just giving myself grace to figure it out as I go and be as present and honest as I can with the dialogue… it just marked a really, really, really pivotal change in my life.”

See WrapWomen’s full interview with Paige via the video up top.

WrapWomen is a power base of influential women of entertainment, media, technology and brands committed to changing the face of their industries. Through media and live events, we provide a platform to accelerate the vision of women who are building towards a more equitable world. Click here to sign up for our weekly newsletter!Follow us on Instagram @WrapWomen and on Twitter @TheWrapWomen.