From Ardverikie with Love! 007 crew build giant ‘container hotel’ with ‘Snoozeboxes’ for 300 people on Scottish estate featured in Outlander and Monarch of the Glen as they get set to film new Bond 25 movie

James Bond appears to be heading back to his roots in his next film after a producers set up camp in the Scottish Highlands.

A ‘container hotel’ that can house a crew of around 300 people has been built at Aviemore in the in the Cairngorms National Park, which was used as the setting of 007’s ancestral home in Skyfall and was rumoured to be a location of Bond 25 earlier this year.

In creator Ian Fleming’s novels, Bond was born and raised in Scotland before becoming a secret agent for MI6, and Daniel Craig’s version stayed true to that origin in 2012’s Skyfall.

It is believed producers will be shooting in and around the Ardverikie estate in Aviemore – which was used as the fictional Glenbogle Estate in the BBC’s Monarch of the Glen – until August.

The hotel was built by Snoozebox, a British firm that turns shipping containers into accommodation packing two beds and a bathroom into a small space. 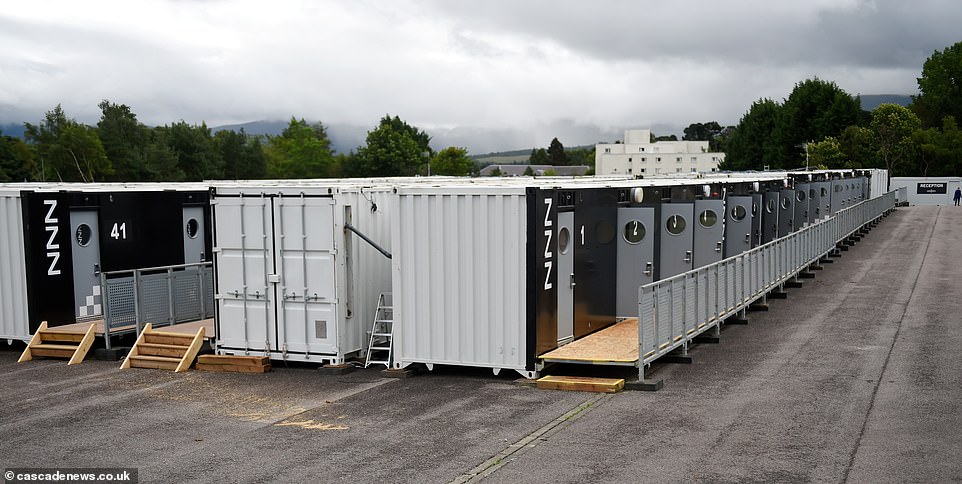 James Bond appears to be heading back to his Scottish roots in 007’s next film after producers set up camp in the Aviemore in the Highlands. Although James Bond is used to staying in luxurious places all over the world, the film crew will have to make do with the Snoozebox ‘container hotel’ for a few weeks while they shoot in Scotland

A huge ‘container hotel’, pictured, that can accommodate around 300 people has also been built in Aviemore for the Bond 25 production, which is out next year 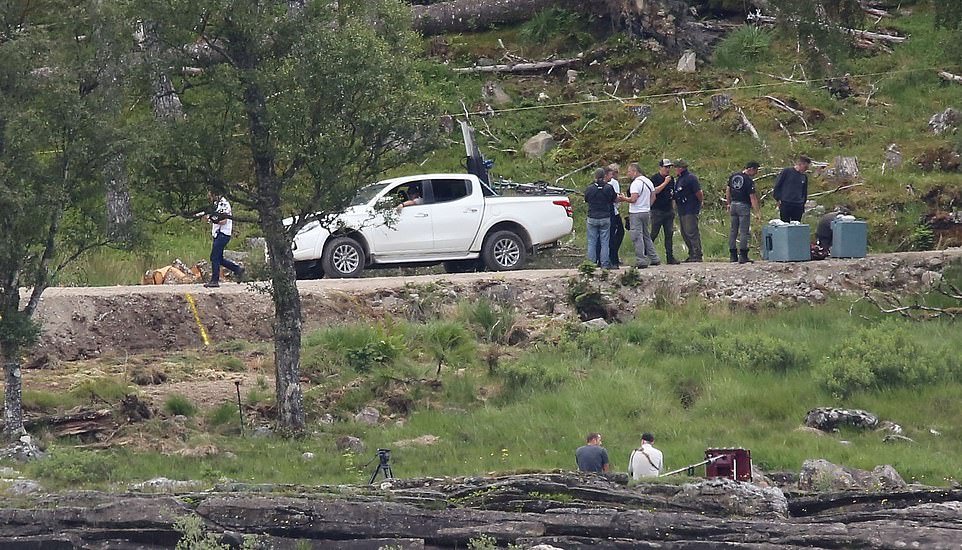 Crews have been seen with filming equipment, pictured, near the Ardverikie estate in Aviemore. In Ian Fleming’s novels, James Bond was born and raised in Scotland and Daniel Craig’s version shares that lineage after he returned to his ancestral Scottish home in 2012’s Skyfall 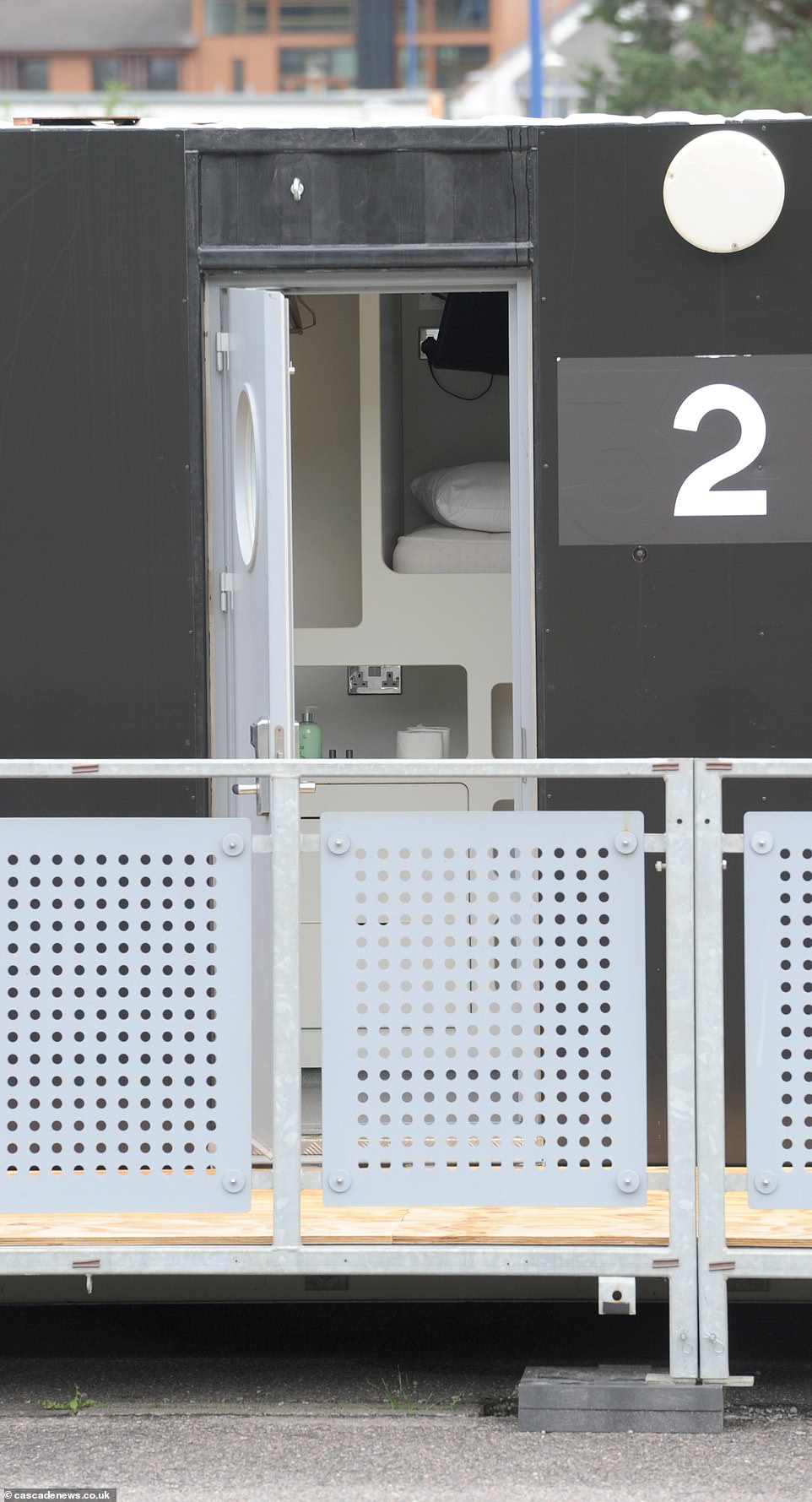 Snoozebox is a British firm that provides ‘portable hotels’ out of shipping containers, with two beds and a bathroom compacted into a small space. Pictured is the interior of one of the rooms 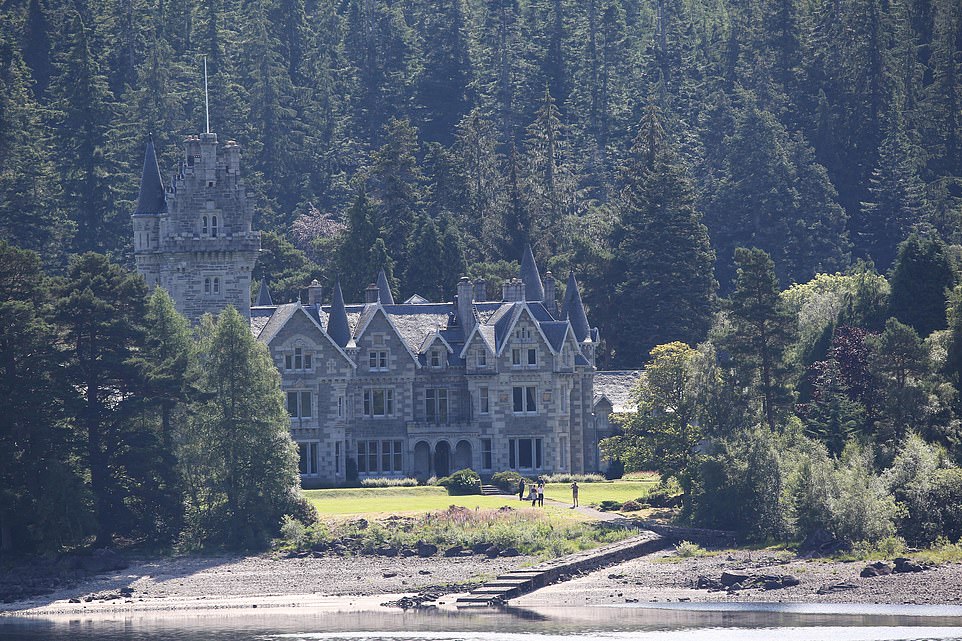 The Ardverikie Estate, pictured, has previously been used in the BBC’s Monarch of the Glen as the fictional Glenbogle 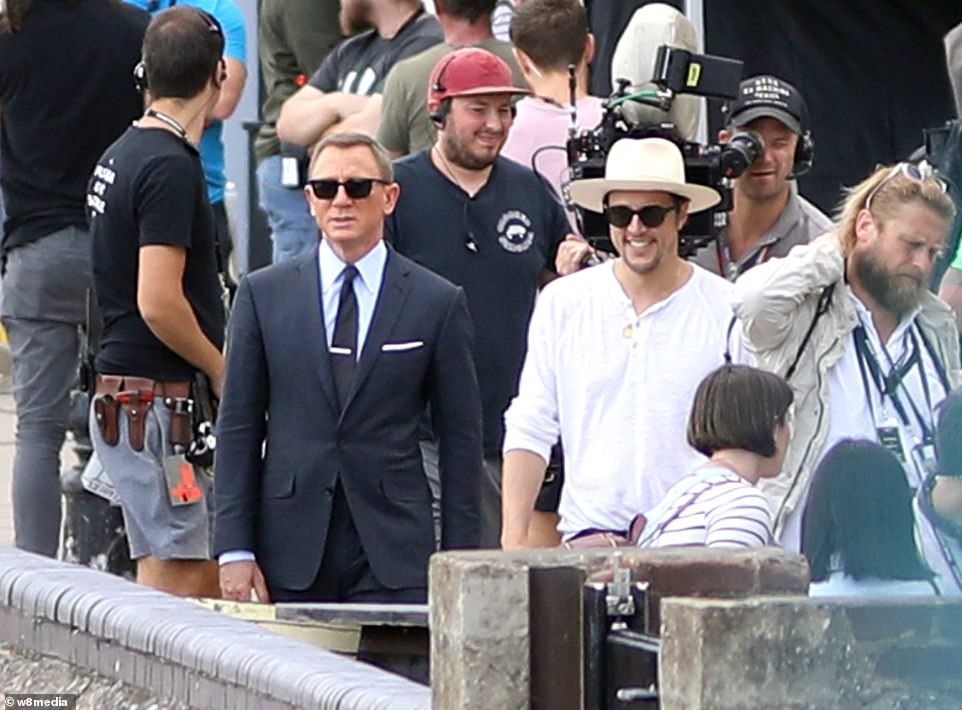 Bond 25 was back to filming in the middle of London on Friday, with the star Daniel Craig looking back to his best following a recent ankle injury

Skyfall filmed around 80 miles away in Glencoe and the activity provided a huge financial boost for the area, with locals in Aviemore hoping for a similar result.

Stewart Nicol, chief executive of Inverness Chamber of Commerce, said: ‘The return of Bond is fantastic news, and will be a multi-million boost to the Highland economy.

‘It is really a significant benefit to the whole region. It is not just the production period that brings a substantial economic boost, as they will be spending in the area, but it is the global effect afterwards.

‘We saw from Skyfall that scenes of Glencoe attracted global interest, so having the landscape of the region promoted again will be a massive boost.’

Mike Dearman, of the Aviemore and Glenmore Community Trust (AGCT), added: ‘It’s fantastic to hear that filming is taking place around Aviemore for the next Bond movie.

‘It’s a very welcome boost for the area and the Highlands which is going from strength to strength as a desirable location for film and TV.

‘We can’t wait to see our beautiful landscape on the big screen once again.’ 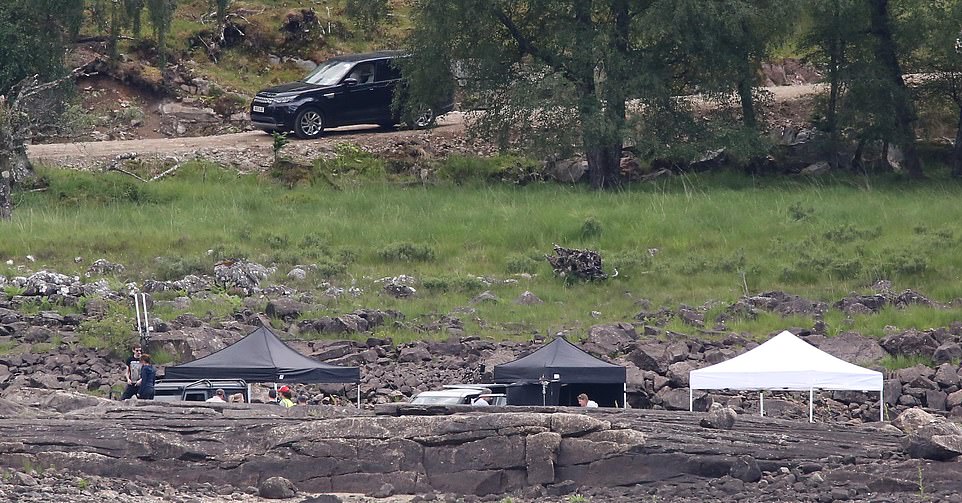 Marquees have been spotted set up around the Highland estate, pictured, but this location is around 80 miles away from Glencoe, the part of the Highlands used in Skyfall 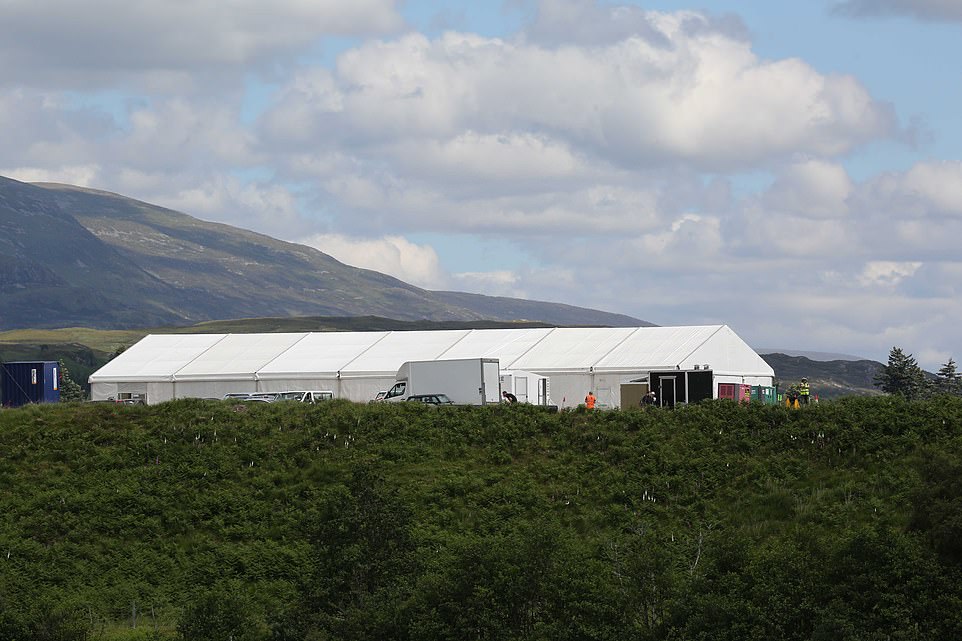 James Bond appears to be heading back to his Scottish roots in 007’s next film after producers set up camp in the Aviemore in the Highlands. Crews are expected to be on site shooting scenes until August. Pictured is a temporary structure set up for the cast and crew 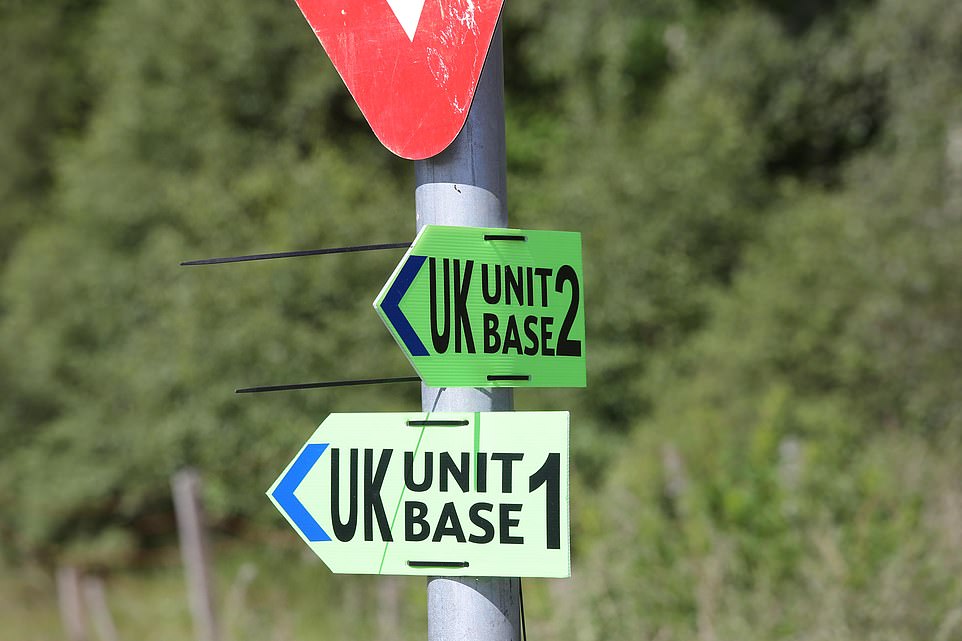 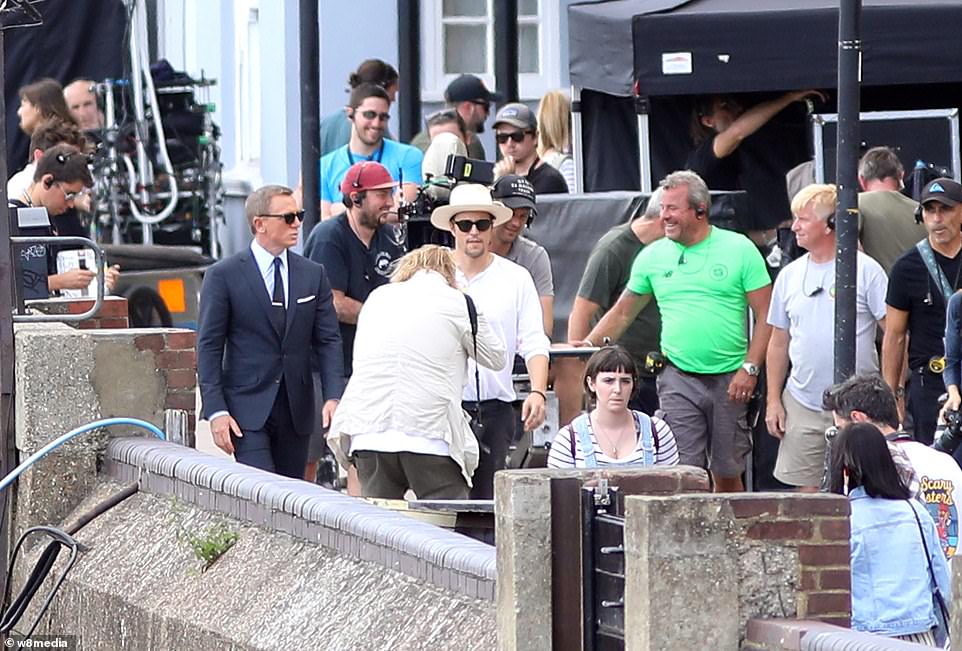 The much-anticipated action film has had a turbulent production process after Daniel, suffered a nasty ankle injury during filming in Jamaica in May 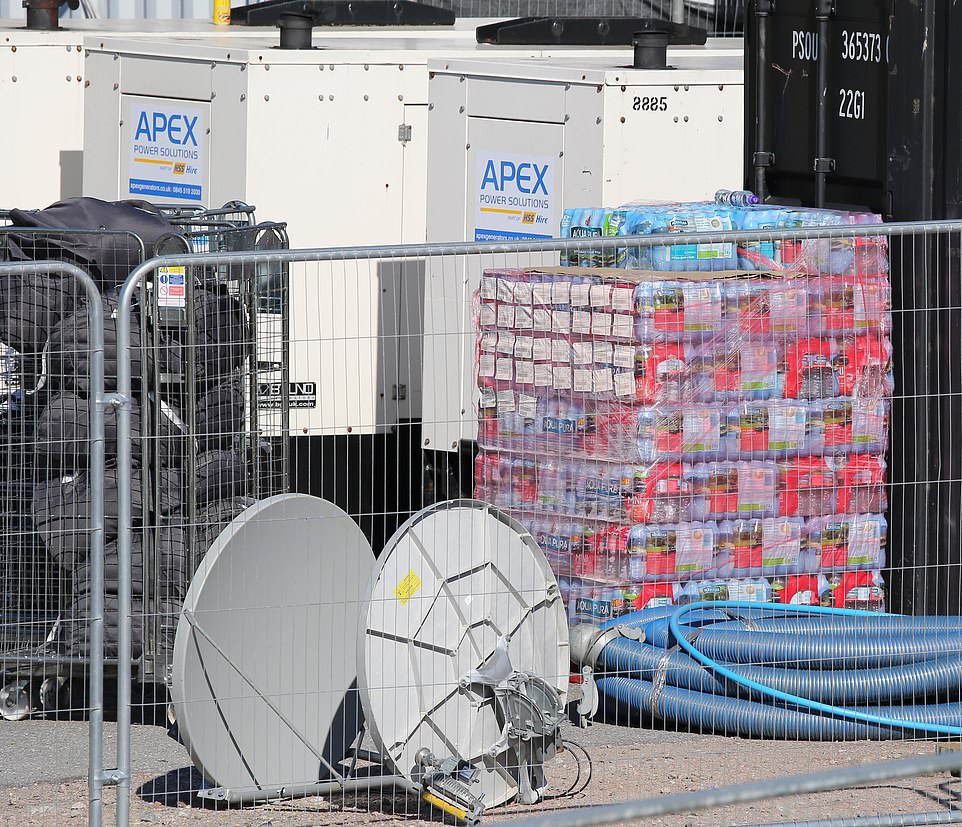 The container hotel appears to be well supplied, with bottles of water stacked on top of each other next to a mound of suitcases

A spokeswoman for VisitScotland said: ‘Screen tourism is booming in Scotland.

Daniel Craig’s desire to do all his own stunts on the new Bond film has been thwarted by injury.

But now producers have come up with a high-tech solution worthy of Q to make it look as if he’s in the thick of the action.

Special-effects wizards have created a computer avatar of the 51-year-old star, which will enable his face to be digitally superimposed on to the body of his stunt double – Frenchman Jean-Charles Rousseau, 31.

Craig was forced to change his stunt plans after injuring an ankle while filming a chase scene in Jamaica in May. In his 13 years as Bond, he has also smashed two teeth, dislocated a shoulder, sprained a knee and sliced the tip off one of his fingers.

A source said: ‘Daniel is in great shape but there are some scenes he can’t do because they are too physically challenging. Plus the insurance company won’t let him. So his face will be superimposed later.’

‘Film and TV productions not only showcase the unique mix of stunning landscapes, rich heritage and fascinating stories Scotland offers but can inspire set-jetting fans to visit, with research showing that one in five visitors come here after seeing Scotland on the big or small screen.

‘Locations throughout Scotland have benefitted from their association with movies or television shows.

‘Skyfall was great news for Glencoe with a 41.7 per cent rise in visitors between 2012 and 2014. For Scotland to feature in the next film in the James Bond franchise offers a fantastic opportunity to inspire film fans to see the on-screen locations for themselves, as well as inspire film crews to return for future projects.’

It is understood filming for the latest Bond film, believed to be called Eclipse, will take place on Ardverikie estate, but no-one there was available to comment while producers Eon have also stayed silent.

The film will be Daniel Craig’s fifth and final outing as the secret agent while Ralph Fiennes and Ben Whishaw are returning as MI6 staff members M and Q respectively.

Bohemian Rhapsody star Rami Malek is playing a Bond villain, while Moneypenny will again be played by Naomie Harris.

It was initially billed for release on 25 October 2019, leaving a four-year gap between the new film and the release of Spectre.

But the schedule was thrown into jeopardy when original director Danny Boyle pulled out of the project, citing ‘creative differences’.

It was previously reported that Boyle, 61, quit as director over a reluctance to kill off Bond at the end of the film.

The film was further pushed back when Craig, 50, wanted more time with his family after wife Rachel Weisz gave birth to their first child together in September 2018. 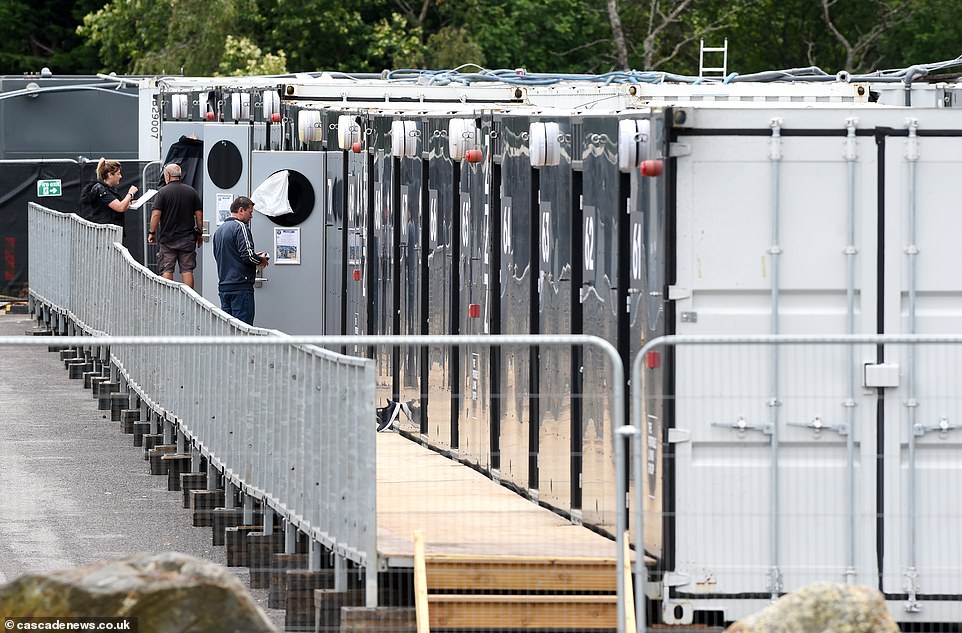 The hotel contains around 160 portable bedrooms, pictured, that can each sleep two people. Pictured are some of the crew going in and out of the rooms 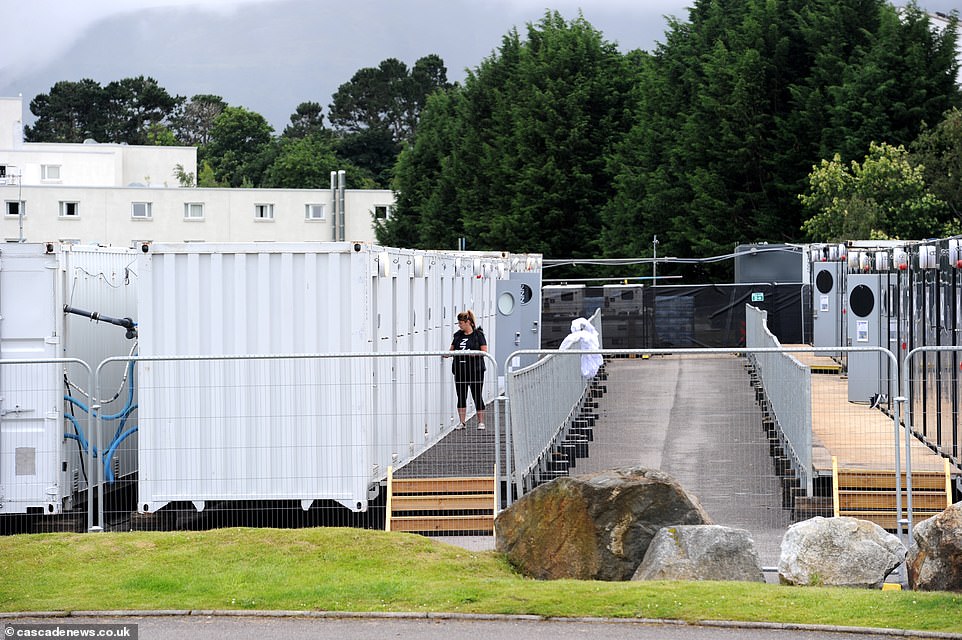 Experts say the Bond film shoot could be worth millions of pounds to the local economy, which is used to film crews having also been used for Judi Dench film Mrs Brown and hit television series Outlander 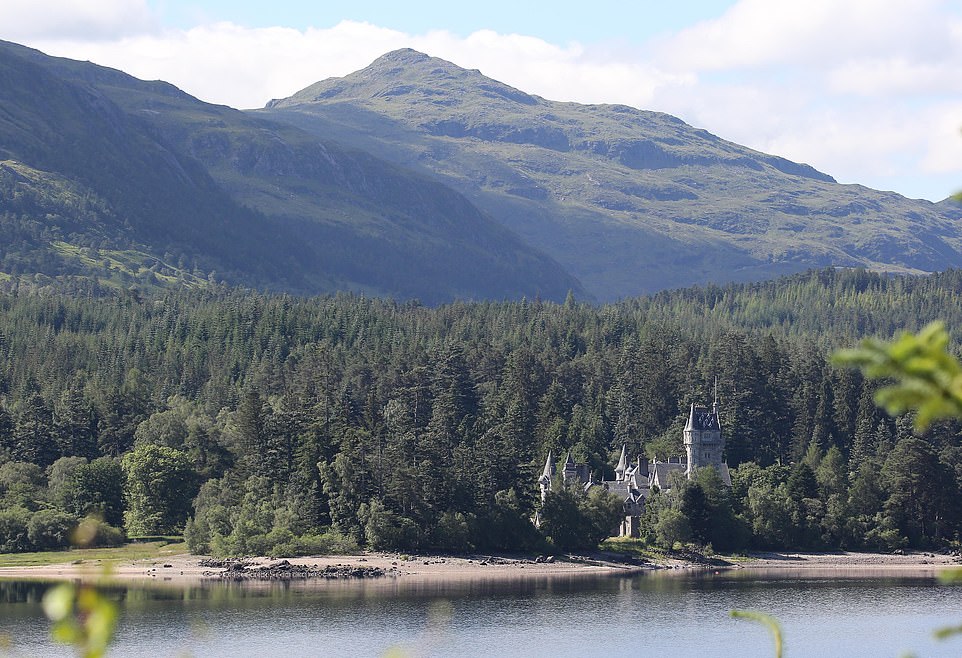 Business chiefs in Aviemore, pictured, are hoping the scenery is prominently featured in Bond 25 so it provides a tourism boost that was enjoyed by Glencoe in the wake of Skyfall, with visitors up by around 40 per cent

Another delay followed when Craig slipped while sprinting during an action shoot on set in Jamaica, sustaining an injury to his ankle.

The production team confirmed on Twitter in May that the 007 actor would be out of action for two weeks as he underwent ‘minor surgery’.

Just a few weeks later, in June, an explosion caused a minor injury to a crew member, and destroyed some of the 007 stage at Pinewood Studios in Buckinghamshire.

But by mid-June, things looked back on track when the official Bond Twitter page shared a photo of Craig hitting the gym in preparation to restart shooting.

It has been announced that the film will start with Bond living in the Caribbean, no longer working for Her Majesty’s Service.

The film is also being shot in Jamaica, Matera in Italy, London and Norway, where early scenes were filmed by a frozen lake.