That’s probably because Andrews can’t prove it, not on the numbers. 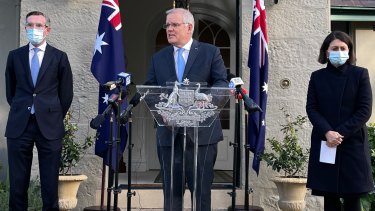 It’s true that the assistance package announced by NSW and the Commonwealth is more generous than that offered to Victoria after it locked down Melbourne in early May. But it’s also true that Greater Sydney is in much deeper strife, already into its third week of lockdown, sure to endure a fourth and fifth and with COVID pundits warning the city’s crisis could last for months.

So the response from Scott Morrison and his Treasurer Josh Frydenberg, that NSW today is a different story to Victoria in late May and early June when Melbourne’s “circuit-breaker” lockdown was expected to last days, is hard to refute.

Had Melbourne’s two-week crisis dragged into a third and fourth week with no end in sight, Morrison and Frydenberg argue, they would have stepped up their assistance accordingly, just like they have in NSW.

Whether or not you accept that probably depends on your politics, or your postcode, but it’s not a question that can be settled on the numbers.

The rates and terms of the federal COVID-19 Disaster Payment are not generous but they were exactly the same for the first two weeks of the lockdowns in both Sydney and Melbourne; nothing for week one, $325 or $500 for week two, and with some pretty stiff eligibility rules.

Maybe Andrews is right when he says Morrison and Frydenberg had to be “shamed” into offering the income support in the first place, after being initially cold on the idea, but the evidence is circumstantial.

It’s also worth pointing out the new NSW-federal deal was announced two days after that state’s Treasurer Dominic Perrottet revealed he had been planning a-go-it-alone state-funded wage subsidy after being knocked back for a reinstatement of JobKeeper for Sydney.

Those facts, too, are open to interpretation but they don’t suggest a sweetheart deal.

Now, say the feds, the template is set: the boosted rates of payments – $375 or $600, still well below the poverty line – and relaxed eligibility rules for stood-down workers will be standard in NSW, Victoria and everywhere else after two weeks out of work in a COVID lockdown.

The new Commonwealth support for NSW’s business relief package, which kicks in at week four of Sydney’s lockdown, looks generous, with 50 per cent of the estimated $500 million a week cost coming from Canberra.

But NSW had already put up $1.4 billion of its own money, early in the lockdown, for business relief, just like Victoria’s package of $550 million to help small and medium businesses that came with no help from the feds. So no smoking gun there, either.

But if it means the federal government is now politically bound to a minimum standard of response whenever and wherever the next lockdown strikes, then that’s not the worst outcome we’ve seen in this pandemic.