Melbourne's local football community is mourning the death of 21-year-old Mitchell Celetano, whose body was found in a Gold Coast canal on Tuesday in Queensland. 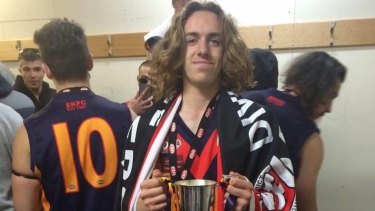 Mr Celetano is being remembered as a talented football player, a larrikin, and a loyal friend and son by those who loved him.

The young man went missing after going for a swim in a waterway near where he was staying with a group of 10 friends from his footy club around 5.30am.

His body was found by divers three hours later in Broadbeach Waters, close to where he disappeared.

Geoff Nicholl, President of the East Keilor Football Club where Mr Celetano had played since a young boy, said the young man was loved at the club.

"He was a great kid, a larrikin and he was a bit of a character," he said. "He was a good friend, a good son as well."

Mr Nicholl said the group of young men had been planning a trip to Byron Bay for New Year's Eve, but changed plans to visit the Gold Coast instead when the COVID-19 situation in NSW escalated.

"It's just a bloody tragic event. They’ve gone up there for a holiday just to relax and this has happened," he said. 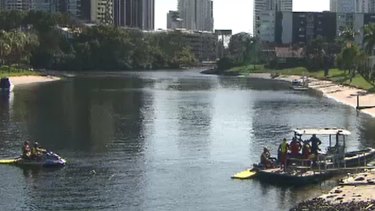 Police and surf lifesavers searched for more than three hours before the body was found.Credit:Nine News Gold Coast – Twitter

Mr Celetano's family have been involved in the East Keilor club for many generations, and Mitchell himself had started playing Auskick there as a young boy.

"It was devastating for me finding out yesterday," Mr Nicholl said, whose own son was good friends with Mitchell. "It was the worst day of my bloody life having to tell him [about the death]."

Mr Celetano's father has now travelled to Queensland and visited the site of his son's death, Mr Nicholl said.

"We'll do whatever we can to support them [the family]," he said.

The football club is organising counselling services for players and families connected with the club.

He said Mr Celetano's friends had all helped in the search for their friend.

It's not clear how the young man came into trouble in the water, and his friends who also swam at the time emerged from the water safely.

An autopsy will be conducted and a report will be prepared for the coroner.