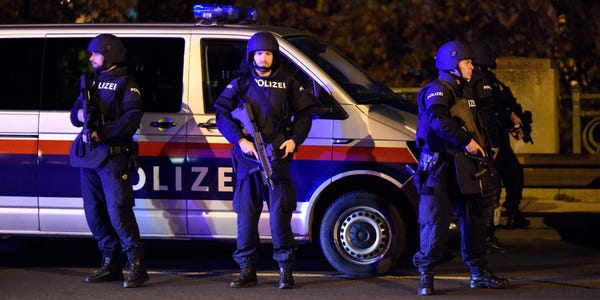 Austrian authorities have described a gunman who carried out the attack that killed four people in Vienna on Monday as an "Islamist terrorist" who was once arrested trying to join ISIS.

Multiple shots were fired across six locations in the city center starting at about 8 p.m. local time, the Vienna police tweeted Monday night.

Four people were killed and 17 others were injured, the country's Der Standard newspaper reported, adding that a police officer was among those injured.

Austria's interior minister, Karl Nehammer, said at a press conference early Tuesday morning that one gunman was also shot dead by the police.

As of Tuesday morning, the Austrian police were still looking for at least one suspect, the BBC and The New York Times reported. It was still unclear whether the gunman acted alone, The Times said.

The assailant reportedly tried to go to Syria to join ISIS

Nehammer said the deceased gunman was sympathetic to the Islamic State and had been "radicalized" by the group, also known as ISIS.

"We experienced an attack yesterday evening from at least one Islamist terrorist," he said.

"He was equipped with a dummy explosive belt and an automatic long gun, a handgun, and a machete to carry out this hideous attack on innocent citizens," Nehammer added.

Nehammer said the gunman who was shot dead was an Austrian and North Macedonian dual citizen, and had a criminal record.

Nehammer told the country's APA news agency that the man had a previous conviction under a law that punishes the membership of a terrorist organization, the Associated Press reported.

Austria's Kleine Zeitung, citing Nehammer, and the AP have named the dead assailant as Kujtim Fejzulai, 20.

Both outlets reported that he was sentenced to 22 months in prison in April 2019 for trying to travel to Syria to join ISIS, but was granted a conditional early release in December 2019 under juvenile law.

In a Tuesday morning tweet, Austrian chancellor Sebastian Kurz said: "It was an Islamist terrorist attack. It was a hate attack. Out of hatred for our core values."

Seven of those injured in the attack are in a critical condition, said Dr. Michael Binder, the medical director of the Vienna Health Association, according to Der Standard.

The shooting began outside the Seitenstettengasse synagogue in central Vienna, but people in nearby bars and restaurants appeared to be the primary target, Rabbi Schlomo Hofmeister said, according to Sky News.

Monday was the last day Austrians could visit bars and restaurants before the country's new coronavirus lockdown went into place.

The killings are the latest in a new flurry of terror attacks to hit Western Europe this autumn.

On October 16, a teacher was beheaded in Paris in apparent retaliation for showing his class cartoons that depicted the Prophet Muhammad.

On October 29, three people were stabbed to death in a terror attack at a church in Nice, France.

And on Saturday, a Greek Orthodox priest was shot in the French city of Lyon.

The attacks came after French President Emmanuel Macron announced a new law that would give the French government unprecedented power to scrutinize mosques and Islamic associations.

Macron has called Islam "a religion in crisis all over the world," prompting the anger of Muslim-majority countries.

On Monday, Macron tweeted his sympathies to the Austrian people on Tuesday morning.

"Europe is in mourning. One of our own has been hit hard by Islamist terrorism. We think of the victims, their families, the shattered lives. France stands alongside Austria, ready to lend its support," he said.