El Paso, Texas: Of all the cities in the United States, Bianca Crespo thought her hometown was one of the least likely to receive a visit from President Donald Trump.

"A lot of people here hate him. Why would he want to put himself in that situation?" 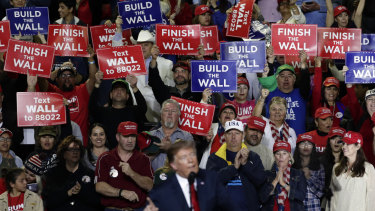 An organised fan base cheers as US President Donald Trump speaks in El Paso, Texas, on Tuesday, Australian time.Credit:AP

Trump almost always holds his rallies in the white, working class areas he won big in 2016. But on Monday, local time, he plunged deep into enemy territory in El Paso, a predominantly Hispanic city where he won just 26 per cent of the vote.

Trump's visit followed his State of the Union address last week, in which he singled out this town as the prime exhibit of why Congress should fund a wall on the border with Mexico.

"The border city of El Paso, Texas, used to have extremely high rates of violent crime – one of the highest in the country," Trump said. "Now, with a powerful barrier in place, El Paso is one of our safest cities."

The remark felt like a slap in the face to many El Pasoans, who took umbrage at the notion it was only a steel barrier standing between them a flood of crime. 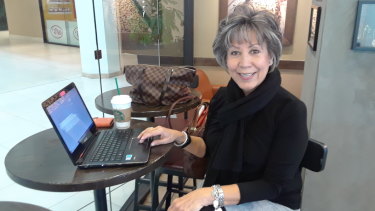 Real estate agent Martha Aguayo says people in El Paso were deeply offended by Trump’s claims about violence in their city: “There was an uproar here”.Credit:Matthew Knott

"The truth is that El Paso was a safe city before the wall.

"There were horrible atrocities happening across the border but not here." 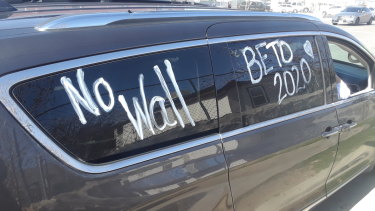 Elisa O’Callaghan, a refugee activist from Dallas, painted “no wall” onto her car and drove for 10 hours to protest Trump’s rally in El Paso.Credit:Matthew Knott

FBI figures show that from 1985 to 2014, El Paso’s violent crime rate was significantly lower than the average for cities of comparable size.

In fact, there was a slight increase in violence after the completion of a steel border fence in 2009. 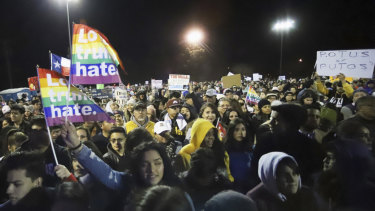 People wait for former congressman Beto O’Rourke to arrive on stage at an outdoor rally across from where US President Donald Trump was holding a rally in El Paso, Texas.Credit:AP

Among those who spoke to correct Trump was the city's Republican mayor, Dee Margo, who tweeted: "El Paso was NEVER one of the MOST dangerous cities in the US. We've had a fence for 10 years and it has impacted illegal immigration and curbed criminal activity. It is NOT the sole deterrent."

"People take offence at the perception and false narrative that we live at a dangerous and lawless frontier," says John Barela, a lifelong Republican who heads the Borderplex Alliance, a group promoting economic development on the US-Mexico border.

"Nothing is further from the truth."

Indeed, the most striking thing when you visit the Paso del Norte International Bridge – which connects El Paso with Ciudad Juarez in Mexico – is how orderly and calm it is.

El Paso and Juarez have a symbiotic cultural and economic relationship. An estimated 20,000 pedestrians cross between the two cities each day as well 30,000 vehicles. It's common for people to live on one side of the border and work on the other.

Bianca Crespo walks to Juarez every couple of weeks to get her nails done: "It's much cheaper over there." 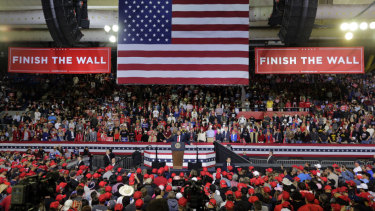 Trump speaks during a rally at the El Paso County Coliseum.Credit:AP

The answer to Crespo's question – why would Trump have a rally here? – was answered that night at the El Paso County Coliseum. Even where Trump is mostly despised, he can still draw a huge crowd.

The 7000-seat arena was full to capacity and thousands more, having queued for hours in chilly winds, watched the rally outside on a large screen.

Many of those in attendance – perhaps as many as 40 per cent – were Hispanic Americans like Gil Zaragoza, a Christian pastor from El Paso.

"It is awesome the President is here," Zaragoza says. 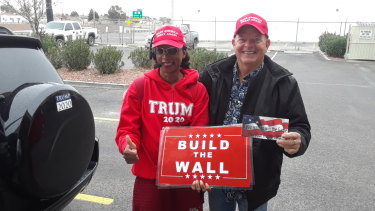 Also in the crowd was Terry Barrett, a retired structural engineer who drove eight hours from Comanche, Texas, for his first rally. He agrees completely with the President's demand for a wall.

"I’m not against immigrants; I am for Texans," he says. "I want to improve our safety and security.

"It’s elitist for people to say they don't want a wall. Show me anyone who doesn’t have a back fence on their house."

Barrett says his views have been influenced by his experience being robbed by illegal immigrants.

"They stole my truck, which had thousands of dollars worth of tools in it."

At the rally, Trump doubled down on his claims about a wall leading crime to plummet in El Paso.

"I don’t care if a mayor is a Republican or a Democrat, they’re full of crap when they say it hasn’t made a big difference," he said.

Alphonso Telles, the chairman of the El Paso Republican Party, says it is wrong for people to use El Paso to argue that physical barriers don't work.

He points out that the big drop in El Paso crime occurred in 1993 with the launch of "Operation Hold the Line", which saw a border patrol vehicle stationed every 100 metres across the border.

Apprehensions at the border quickly declined 700 to 200 a day.

"We evolved from a human wall to a physical wall and that was a good thing – it freed up manpower," Telles says.

"You don’t need a wall from coast to coast but in residential areas like El Paso it has been very helpful at stopping illegal crossings."

At the same time as Trump's rally, former congressman and potential Democratic presidential nominee Beto O'Rourke led a march in town to oppose a wall. Police estimated between 10,000 and 15,000 people attended the march where O'Rourke said El Paso was safe in spite of its wall not because of it.

Aguayo says a wall may act as a deterrent to illegal immigration, but not enough to justify the $US5.7 billion Trump is asking for.

"The reason we are safe here is because of our border control, our police, technology," she says.

"I love El Paso, and I don’t want people all over the world thinking this was a dangerous city."