A new Monash University survey of nearly 100 state school principals and assistant principals showed 69 per cent were concerned about children's exposure to family violence. Sixty per cent named online bullying as a significant issue and more than 90 per cent said the number of students needing mental health support had risen in the past five years. 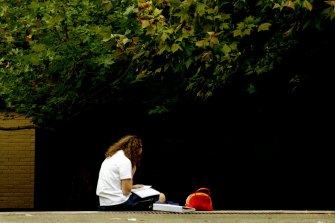 The coronavirus pandemic has exacerbated existing issues for some Victorian schoolchildren. Credit:Virginia Star

Racism and poverty were also named as negatively affecting Victorian children. One in five principals said professional development to help staff deal with incidents of discrimination or harassment between students was inaccessible.

Professor Jane Wilkinson, who led the team of Monash and Deakin University researchers, said the aim was to reveal the biggest issues affecting social cohesion in schools, and to identify what works to tackle them.

"Schools are often the first port of call when there's distress in a family or the community," she said. "We have major issues in society and schools cannot be responsible for handling them all.

"We as a society need to ask some hard questions about where we invest funding. We want to constructively support schools."

A group of Victorian principals who did not participate in the survey, and who spoke anonymously to protect students' privacy, agreed these issues were prevalent in schools and became more pronounced during the coronavirus pandemic.

"Those who were already vulnerable socially or emotionally became more so," one said.

Some principals, from metropolitan and regional schools, said cyber bullying via remote learning and gaming platforms increased, causing students' mental health to deteriorate, with a flow-on effect to staff.

The impact on young people during Victoria's coronavirus lockdown and move to remote learning has been severe.

Teachers, psychologists and helplines reported a significant spike in calls for children’s mental health support. Similarly, reports of family violence have increased during the pandemic.

"It's really about recognising that there are bigger things at play for schools that aren't only about academic results but are about the whole child and society. COVID has made that very clear to us, it has really exposed that," she said. "We understand it's a hard job, we understand it's often a thankless task, and COVID has also made people sit up and appreciate schools and teachers more."

The report does offer reasons for optimism. Most respondents said students accept and help others they see as different, with 80 per cent saying anti-discrimination policies helped their school community.

Professor Wilkinson cites the Respectful Relationships program as an investment by the state government that is having huge success and creating change in schools.

The state government announced more than $28.5 million in mental health funding for schools during the pandemic, due to be rolled out across this year and next.