A survivor of a domestic abuse has recalled the moment her partner attacked using a 32 inch television with the back of her skull.

Shards of glass shattered across Abbie Brydon’s bedroom in Manchester back in March 2018 when her then-boyfriend Scott Hughes, 27, struck her.

The 28-year-old tried to escaped but he pinned her into a corner, kicked her and stamped her head.

Her blonde hair had turned red with blood and she was convinced the man supposed to love her was about to kill her. 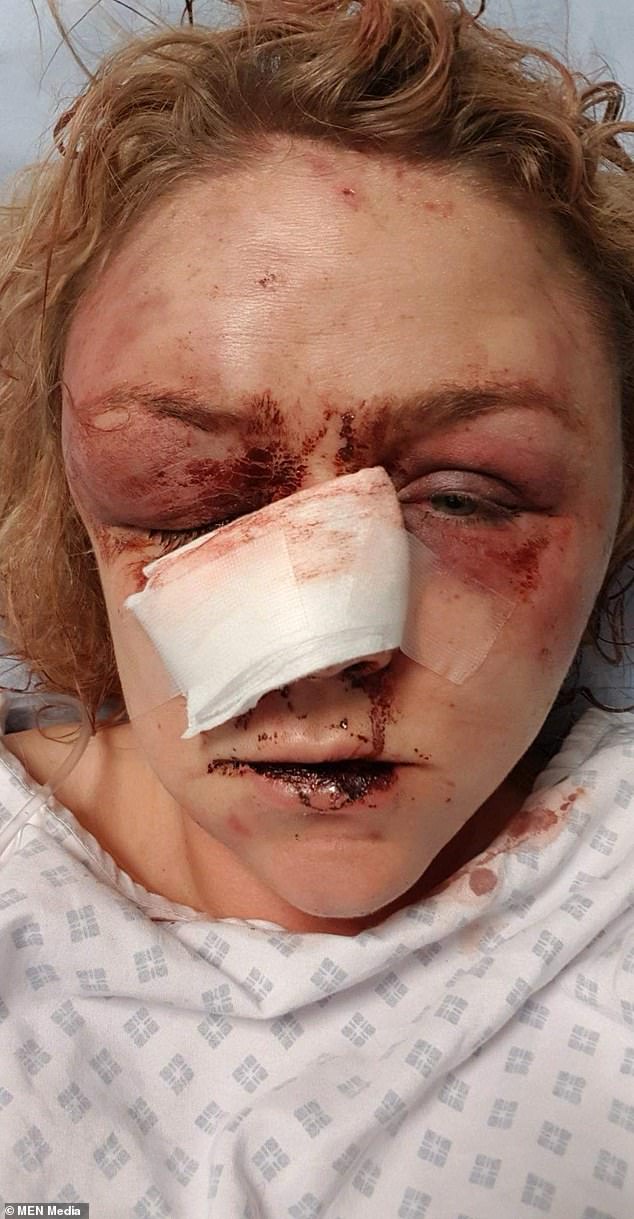 Domestic abuse survivor Abbie Brydon, 28, was left bloodied and bruised after her ex-boyfriend Scott Hughes, 27, attacked her using a 32 inch television back in March 2018

She met Hughes after the pair got chatting in a pub in Manchester several months earlier and thought he seemed like a ‘nice guy’.

They eventually sparked a relationship before moving into their own flat together.

Friends had warned her that Hughes had a chequered past, but Abbie ignored them, believing she knew a different side to him.

But less than a year into their relationship, Abbie was hospitalised with two ‘blow out’ fractured eye sockets, nasal fractures and a face so badly bruised her own family didn’t recognise her.

Her injuries were shocking, but for Abbie, it was a relief just to be alive.

There had been some warning signs, but none that would predict what Hughes was going to do to her that Friday night.

Hughes, from Northern Moor, Wythenshawe, will now serve 14 years behind bars after being convicted of grievous bodily harm with intent following the attack on March 24 last year.

He tried to fool a jury that he acted in self-defence – even slitting his own throat in a twisted attempt to frame Abbie for his crimes – but they saw through his web of lies. 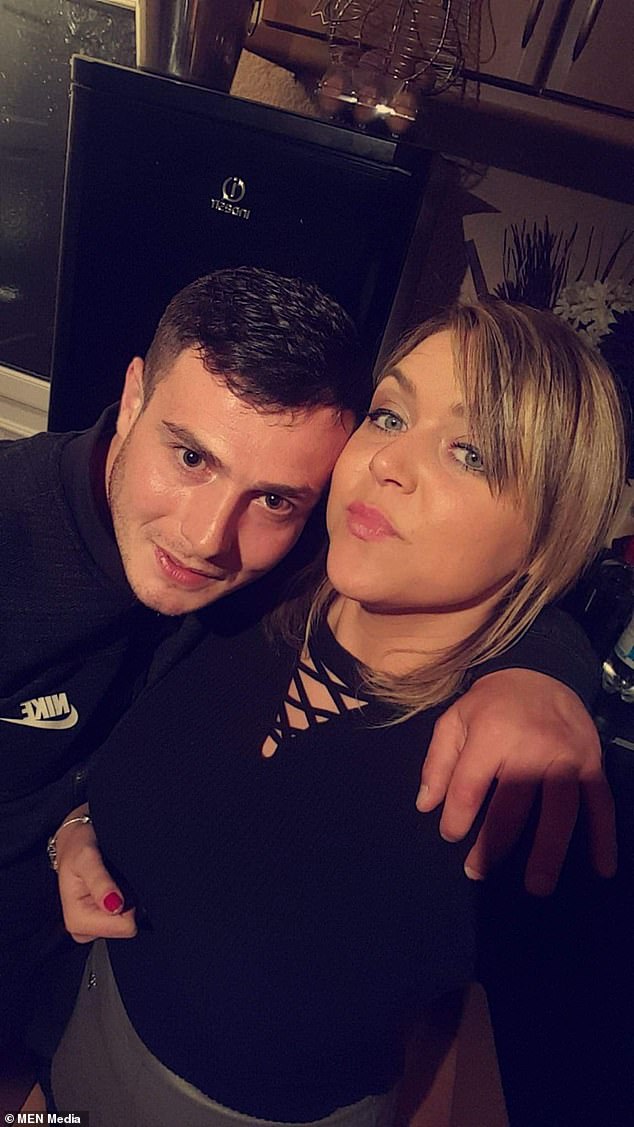 It later emerged that he had a string of convictions for violence.

Speaking publicly for the first time, Abbie hopes her story will inspire other victims of domestic abuse to seek justice. 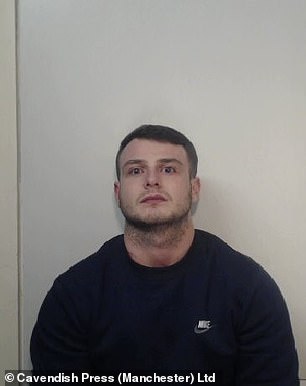 ‘He had me fooled for a very long time,’ said Abbie.

‘After a few dates I had mentioned him to my friends and they warned me to stay away from him, but I just couldn’t see it – he seemed like a really nice guy.’

Abbie says the cracks began to show within a matter of weeks after she went on a three-week holiday to Australia with friends.

‘Even in the first day of the holiday I had my phone cut off because Scott had run up a £300 bill because he hadn’t stopped ringing me,’ she said.

‘He would constantly ask me what I was doing and who I was with.

‘At the same time I was speaking to my mum back home and he was helping her walk the dog and taking her shopping so I thought, am I being too hard on him?’

By Christmas 2017, the pair had moved into a flat together and for a short while, things seemed to be going okay.

‘After a month or so living together, Scott just completely changed,’ Abbie said. 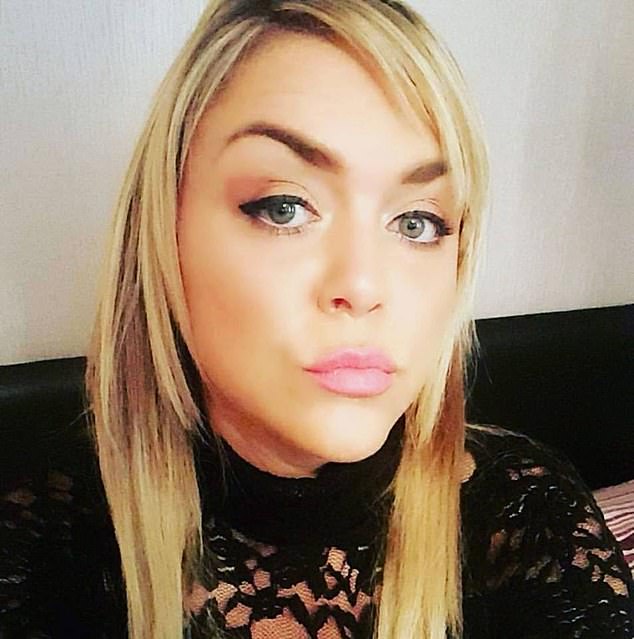 After about a month of living together she noticed that he had changed and was crippled with jealousy and paranoia, and would often accuse her of cheating on him 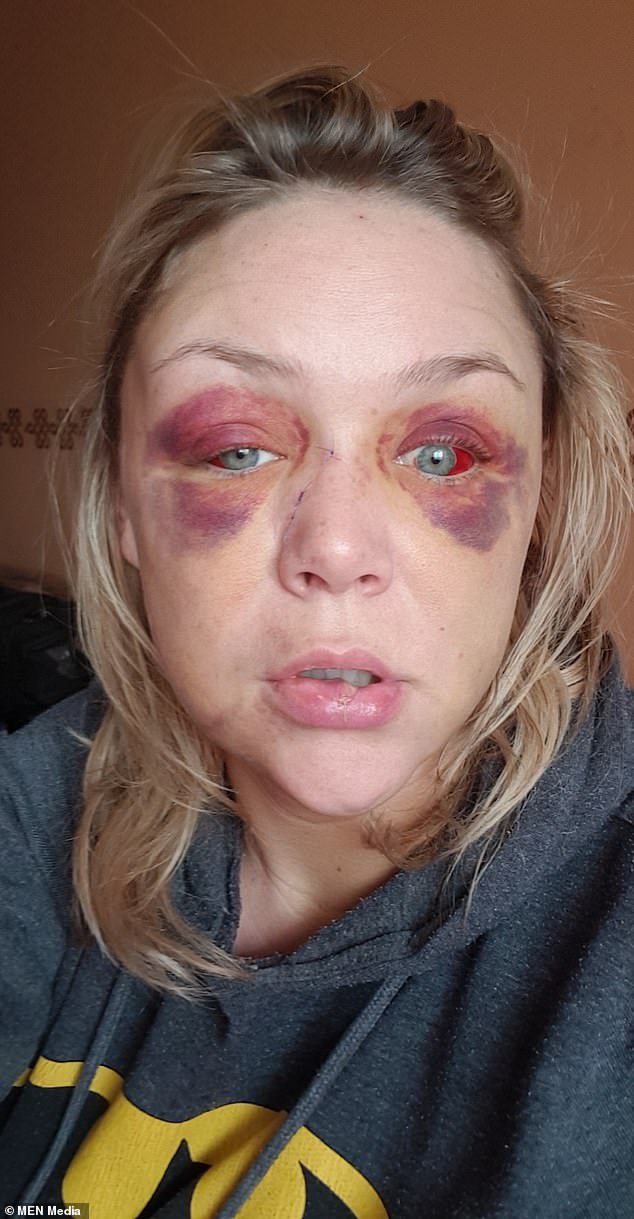 It was clear to Abbie that her boyfriend was crippled with jealousy and paranoia, and would often accuse her of cheating on him.

On one occasion, Hughes flew into a fit of rage after Abbie accepted a lift home from a man at work instead of walking home in the snow.

‘Even when we were out with Scott’s friends, he would accuse them of flirting with me,’ she said.

The 24th of March was a Friday and Abbie had been working a late shift and she and Scott had planned to have a few drinks when she got home.

‘By the time I got home from work Scott was absolutely wasted and I could tell he had been taking drugs,’ Abbie said.

The pair had an argument and Hughes decided to go out to a house party whilst Abbie stayed at home, falling asleep on the sofa.

But the couple argued again when Hughes was bought home by a mutual friend, who he later accused of sleeping with Abbie.

‘As soon as the guy left Scott just flew into another one of his rages,’ she said.

‘I told him I had had enough and that I couldn’t go on like this anymore so I went upstairs to begin packing a suitcase.’ 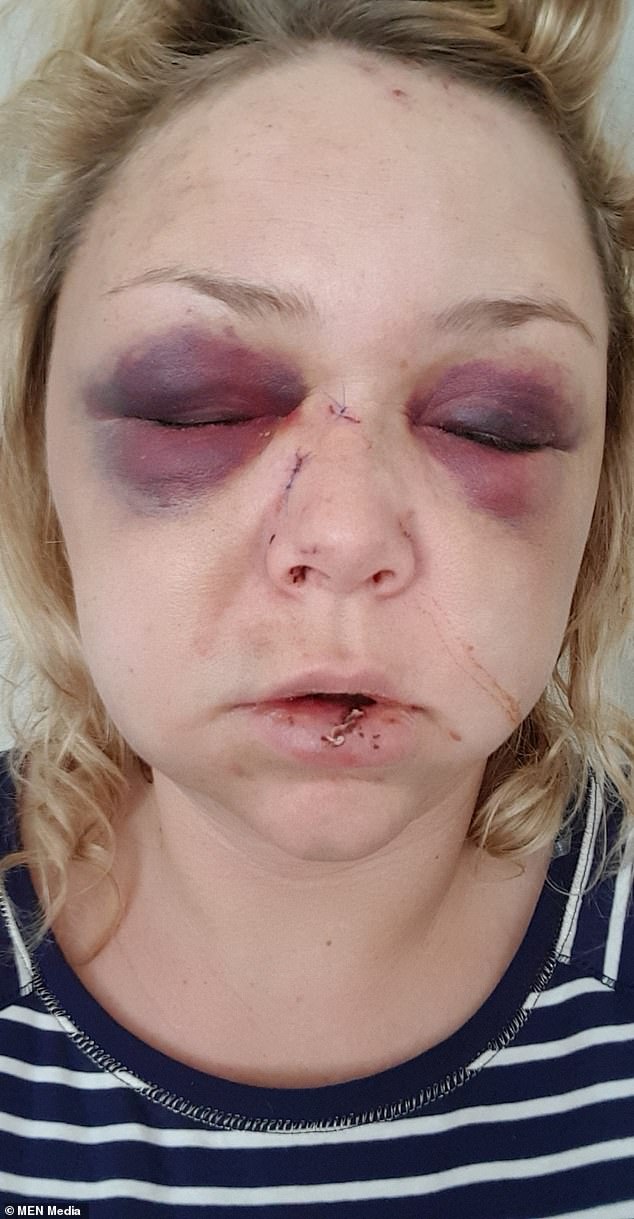 After going to a house party, Hughes returned home to Abbie and they argued. He flew into a rage and she left to pack a suitcase. Moments Abbie was curled up in a ball on the bedroom floor after he smashed her 32inch flat screen over her head

Moments later, Abbie was curled up in a ball on the bedroom floor trying to escape the excruciating pain she felt coming from her head.

‘He picked up my 32inch flat screen and smashed it over the back of my head,’ Abbie recalled.

Hughes repeatedly punched Abbie to the face, poured paint on her, kicked her to the head and at one point, pulled a wardrobe over her.

In an attempt to ‘dispose of the evidence,’ Hughes forced Abbie into the shower before assaulting her again.

So desperate to cover his crimes, Hughes even took a ‘butter knife’ to his own throat and inflicted ‘superficial’ wounds to make the attack look like self defence.

As Abbie made a run for the stairs, Hughes resumed the assault and pushed her down the stairs, punching, kicking and stamping on her again. 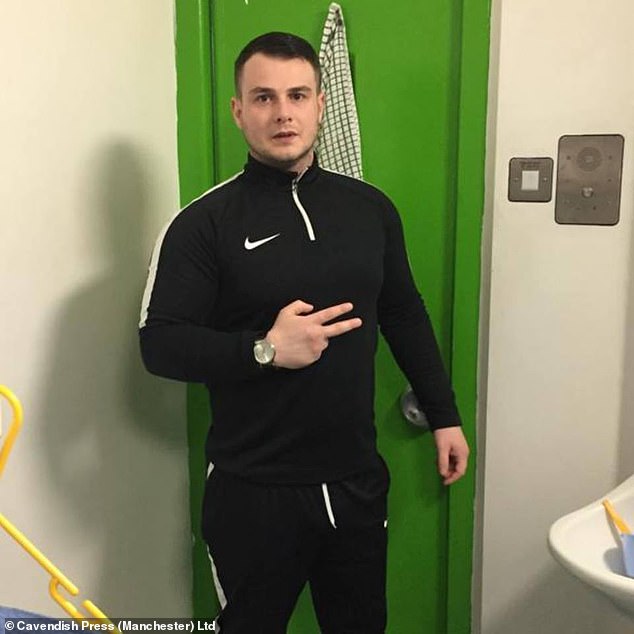 Hughes reportedly punched her, poured paint on her, kicked her to the head and at one point, pulled a wardrobe over her. He even took a ‘butter knife’ to his own throat and inflicted ‘superficial’ wounds to make the attack look like self defence 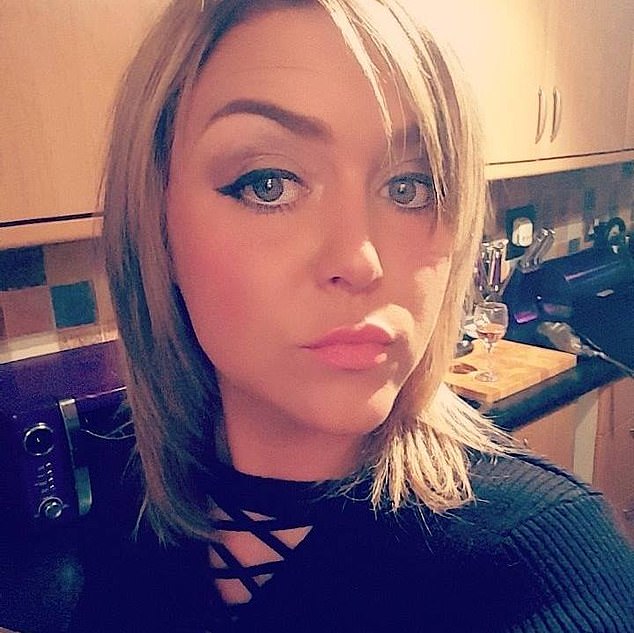 Abbie says she was unable to work for three months after the assault due to the severity of her injuries and her extreme anxiety. She said: ‘I have insomnia because I’m scared to sleep knowing that I’ll wake up in a sweat having relived what he did to me’

‘I pleaded with him to stop because I knew in that moment if he didn’t he was going to kill me,’ she said.

‘Nobody should ever have to plead for their life.’

Her terrifying ordeal only came to an end when Abbie managed to open the front door and scream for help, alerting neighbours to the house.

‘I was taken to hospital and I was unrecognisable,’ she said.

‘My brother and best friend came to visit me and they walked straight past my hospital bed because they didn’t even recognise me.’

Abbie says she was unable to work for three months after the assault due to the severity of her injuries and her extreme anxiety.

‘The nightmares are the worst bit,’ Abbie said. 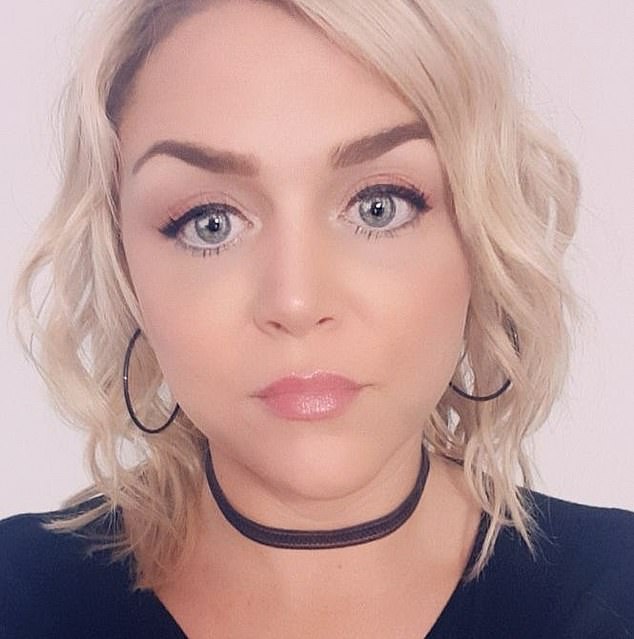 Abbie pressed charges against Hughes and vowed to see the case through to trial, where she was forced to testify against him and relive her traumatic ordeal

‘I have insomnia because I’m scared to sleep knowing that I’ll wake up in a sweat having relived what he did to me.’

Abbie pressed charges against Hughes and vowed to see the case through to trial, where she was forced to testify against him and relive her traumatic ordeal.

‘I don’t want people to think they can’t get justice,’ said Abbie.

‘I couldn’t have it on my conscience that if I didn’t speak up he could have killed someone else, because he so nearly killed me.

‘Even though going through the trial was the hardest thing I have ever done it was the best thing I did because now I know he can’t do it to anybody else.’

Thanks to Abbie’s bravery, Hughes will be on licence until 2037 following his release from jail, under the terms of an extended sentence.