North Melbourne’s Arden precinct redevelopment will not be required to provide affordable housing, despite projections it will have 15,000 residents in the next three decades.

The suburb’s Lost Dogs’ Home will be bulldozed to make room for the housing and commercial development, while a stormwater tank built under Arden Street Oval could temporarily displace the North Melbourne Football Club from its home ground. 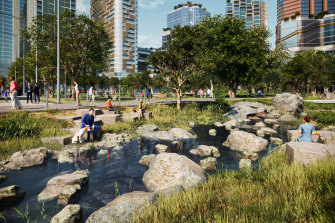 An artist’s impression of the new Arden precinct in North Melbourne, which the state government says will be home to 15,000 residents by 2050.

The state government confirmed some details about the planning controls it will pass into law on Thursday, guiding how the 44-hectare site around the new Arden Station will be developed.

About a quarter of the area – more than 12 hectares – will be open space, including a one-hectare neighbourhood park (half the size of an AFL field) and 6.5 hectares as a flood zone for Moonee Ponds Creek.

Apartment towers 40 storeys tall will be allowed beside the CityLink and existing rail corridor, with height limits dropping to 15 storeys near the border of existing residential areas. However, it is not clear if height limits will be enforced, potentially leaving room for even taller buildings.

For context, Victoria’s tallest building, Southbank’s Australia 108, has 100 floors and stands 317 metres tall, while Whitehorse Towers in Box Hill is one of the tallest building’s outside the city at 115 metres.

The state government hopes 34,000 people will work in the area by 2050, with Arden Station a two-minute train ride to the Parkville medical and research precinct when the new Metro Tunnel opens in 2024 or 2025. The train to Melbourne Airport will stop at Arden when the line opens in 2029.

Transport Infrastructure Minister Jacinta Allan said the precinct would be a “new health and innovation precinct, creating thousands of jobs and building an entire new thriving and sustainable community”.

“With the opening of the Metro Tunnel, Arden will become a key new destination for Victoria and a vibrant employment precinct on the doorstep of Melbourne’s CBD,” she said in a statement.

But the government will not impose a quota for affordable housing in the area, instead saying it would “support and encourage” at least 6 per cent of all dwellings being affordable. 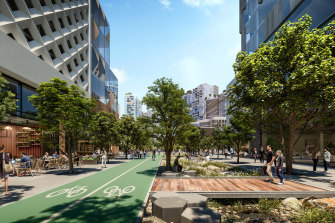 A Planning Panels Victoria committee report recommended in May that affordable housing requirements be mandatory. City of Melbourne – the precinct’s local council – also pushed for more public housing, while raising concerns that liveability would be compromised if developers were allowed to build excessively high towers.

Victorian Greens leader Samantha Ratnam said a non-binding 6 per cent target in a suburb of 15,000 people was “unacceptable when we are experiencing a housing crisis”.

“This is the perfect opportunity to build more public and affordable housing close to transport links and healthcare,” she said. “This government allows property developers to get away with not paying their fair share towards more affordable housing.”

Lost Dogs’ Home spokesperson Suzana Talevski said the organisation was told on Wednesday that the Gracie Street shelter – its headquarters for 114 years – would be compulsorily acquired.

“We have to move, so we’re just trying to get the best deal for the animals and for our staff. What that might look like, we’re not sure yet,” she said.

Talevski said the state government had promised to assist in its relocation, but the shelter was concerned about finding a new space in a suitable location that was big enough to handle the 15,000 cats and dogs that come though its doors each year.

North Melbourne Football Club chief Ben Amarfio said the club supported the redevelopment, but would not comment on what the construction of a stormwater tank under the Kangaroos’ training ground would mean for the club.

“The club will work closely with the state government … to get the best outcome for the club and community alike as we play a critical role in bringing Arden’s vision to life,” he said.

Kevin Chamberlin, chairman of the North and West Melbourne Association and a former Melbourne lord mayor, said a discretionary height limit of 40 storeys would likely result in buildings 60 or 70 storeys high.

“To allow massive heights in inappropriate locations is merely an attempt to relocate Docklands to North Melbourne,” Chamberlin said. “It’s a lost opportunity where a truly great development could have been achieved”.

Lord Mayor Sally Capp said it was critical the city got Arden right, and the council would “carefully review and consider what the plans mean for the City of Melbourne”.

The planning scheme amendment to be gazetted on Thursday will include a policy for a Green Star energy rating of six on all new developments and a precinct target of zero-net emissions by 2040.

It will also nominate potential sites for a proposed primary school and future health institution.

Gay Alcorn sends a newsletter to subscribers each week. Sign up to receive her Note from the Editor.