Kabul: A lone Islamic State gunman rampaged through a Sikh house of worship in the heart of the Afghan capital on Wednesday, killing 25 worshippers and wounding eight, Afghanistan's Interior Ministry said.

The gunman held many of the worshippers hostage for several hours as Afghan special forces, helped by international troops, tried to clear the building. At least one of the dead was a child.

Within hours, the Islamic State group claimed responsibility for the attack. 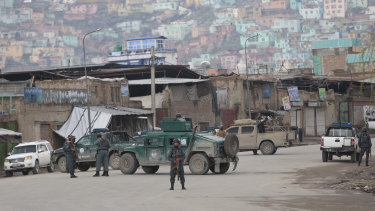 Afghan police arrive at the site of an attack in Kabul, Afghanistan.Credit:AP

As the siege ended, the Afghan special forces rescued at least 80 worshippers who had been trapped inside the Sikh house of worship, known as Gurdwara, as the gunman lobbed grenades and fired his automatic rifle into the crowd, the ministry said.

The SITE Intelligence Group, which tracks militant postings and groups, said IS had claimed responsibility for the attack on the group's Aamaq media arm.

At a Kabul hospital, Mohan Singh, who was in the Gurdwara when the attack began, said he first heard the sound of gunshots and ducked for cover under a table. Later he heard the sounds of explosions, adding that he believes they were hand grenades. He was injured when parts of the ceiling fell on him.

In photographs shared by the Interior Ministry, about a dozen children were seen being rushed out of the Gurdwara by Afghan special forces, many of them barefoot and crying.

As the news of the attack first broke on Wednesday, Taliban spokesman Zabihullah Mujahed tweeted that the Taliban were not involved. Earlier this month, Afghanistan's IS affiliate struck a gathering of minority Shiite Muslims in Kabul, killing 32 people.

Afghanistan's National Security Adviser Hamdullah Mohib condemned the attack in a tweet while neighboring Pakistan and India both issued statements of condemnation. Pakistan described the attack as "heinous." 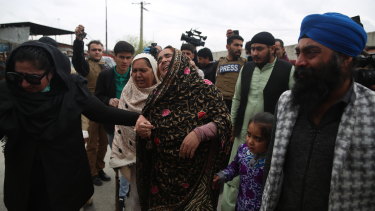 Family members in anguish after gunmen stormed a religious gathering of Afghanistan’s minority Sikhs in their place of worship.Credit:AP

"Such despicable acts have no political, religious or moral justification and must be rejected outright," the Pakistani foreign ministry statement said.

India said the attack was particularly egregious coming as Afghanistan sought to deal with the growing coronavirus pandemic.

"Such cowardly attacks on the places of religious worship of the minority community," India said, reflect the "diabolical mindset of the perpetrators and their backers."

Sikhs have suffered widespread discrimination in the conservative Muslim country and have also been targeted by Islamic extremists. Under Taliban rule in the late 1990s, they were asked to identify themselves by wearing yellow armbands, but the rule was not enforced. In recent years, large numbers of Sikhs and Hindus have sought asylum in India, which has a Hindu majority and a large Sikh population.

In July 2018, a convoy of Sikhs and Hindus was attacked by an Islamic State suicide bomber as they were on their way to meet Afghan President Ashraf Ghani in the eastern city of Jalalabad, the capital of Nangarhar province. Nineteen people were killed in that attack.