Among the ranks of Republican candidates are Holocaust denier Arthur Jones and anti-Semite Paul Nehlen. 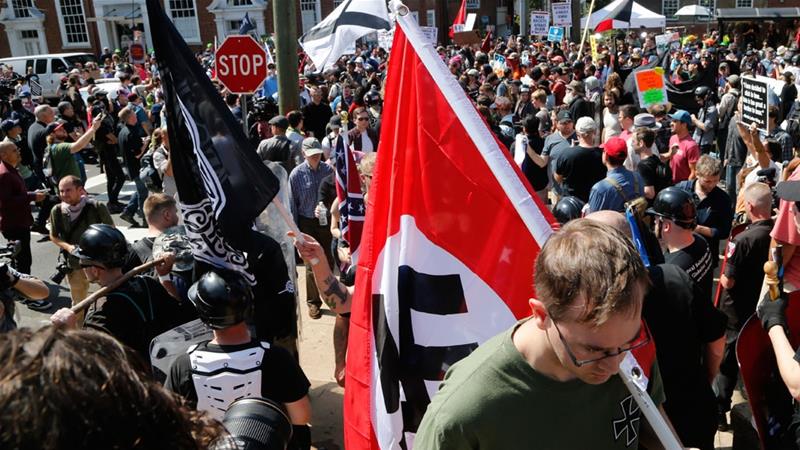 Criticism is mounting over the presence of far-right and anti-Semitic Republican candidates in upcoming races in the United States states of Wisconsin and Illinois.

Arthur Jones, a Holocaust denier who is known for white supremacist advocacy, is poised to become the Republican nominee for an Illinois congressional seat.

The Illinois Republican Party has condemned Jones and disavowed his campaign, telling local media that “there is no room for Neo-Nazis in American politics”.

In Wisconsin, Paul Nehlen, who has decried supposed Jewish control of media, is challenging a Republican incumbent for a seat later this year.

Although Nehlen has little chance of beating incumbent Paul Ryan, who is the Republican Speaker of the House, in the primary runoff, and Jones is almost sure to lose to his Democratic opponent, critics say their presence in the Republican Party is indicative of a worrying trend.

Jared Holt, a researcher and writer at Right Wing Watch, a watchdog group, explained that fringe candidates attempt to infiltrate mainstream politics in almost every cycle, but argued that 2018 “is a bit different”.

“Fringe candidates have made a lot more noise and have been more transparent with their fringe world view and alliances with extremists than we’ve seen in prior cycles,” he told Al Jazeera.

Although these candidates may have little chances of making it to office, Holt added that their rhetoric and publicity “still effectively shift the ‘Overton Window’ in a way that drags the right further towards the fringes and gradually works to make Republican voters more open to the ideas of the alt-right”.

The alt-right is a loose coalition of white supremacist, white nationalist and neo-Nazi groups that advocate for a white ethnostate in North America.

Jones, a 70-year-old retiree, currently has no Republican challenger in the primary election, and is slated to face-off with a Democratic contender in November, when the congressional elections are scheduled to be held.

A former member of the American National Socialist Workers Party, a neo-Nazi outfit, Jones has unsuccessfully run for office several times since the 1970s, according to the Chicago Tribune daily.

His website has a section titled “Holocaust?”, under which there is a document embedded called “The ‘Holocaust’ Racket”.

Last year, Jones attended a neo-Nazi summit in Pikeville, Kentucky, where he addressed the audience with a fiery tirade against US President Donald Trump, dubbing him as a leader who “betrays us”.

“Now, President Trump – he has surrounded himself with hordes of Jews,” he proclaimed, “including a Jew in his own family.”

He added: “I’m sorry I voted for that son-of-a-b*tch. Pardon my English.”

Many of Jones’ policy proposals, however, align with the Trump administration’s stances.

Last month, neo-Nazis, white supremacists, far-rightists and conspiracy theorists celebrated Trump’s State of the Union, the annual speech the president delivers to a joint session of Congress, for his hard line comments on immigration.

‘Okay to be white’

Nehlen, who is widely expected to lose again to Paul Ryan, recently sparked outrage when he took to Twitter to compile a list of media figures who criticised him who he claimed were Jewish.

Many of those he listed are not Jewish.

Nehlen, who has a history of advocating for alt-right causes, also posted a tweet that read: “It’s okay to be white.”

Last month, Nehlen, who has not publicly described himself as a white supremacist, appeared on a radio programme hosted by David Duke, the former leader of the Ku Klux Klan (KKK) and an infamous white supremacist.

Asked by Duke if it was wrong to support the preservation of a white-majority country, Nehlen replied that it was “right and righteous” to do so.

“I think that we [white people] have built wonderful civilisations in northern Europe and around the world,” Nehlen continued. “And if it weren’t for our leadership, many more people would’ve died over the course of history.”

During the 2016 presidential campaign, Trump was widely denounced for initially refusing to disavow Duke’s endorsement.

In the past, Nehlen has appeared twice on the neo-Nazi podcast Fash the Nation, which sparked criticism from former allies of his at the far-right website Breitbart News and led to condemnation from Steve Bannon. 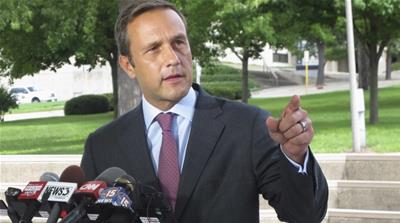 Bannon was a strategist for Trump until last summer, and he was removed from his position as executive chairman of Breitbart News last month following critical remarks he reportedly made of Trump in a controversial book called Fire and Fury.

“Arguably, the most successful move the alt-right has made in Republican politics is their hard anti-immigrant sentiment, which the United States has watched come to life in the Trump administration through figures such as [Trump’s senior adviser] Stephen Miller,” Holt said.

“Although the alt-right isn’t proposing bills in Congress, they have desensitised the Republican Party to policies and rhetoric that disproportionately harm non-white communities.”

While Cas Mudde, author of The Far Right in America, sees no “cause for concern” in the candidacies of Jones and Nehlen, he said they nonetheless “reflects how the current GOP [Republican Party] is perceived by far-right activists, including anti-Semites and Holocaust deniers”.

Mudde, who is an associate professor in the School of Public and International Affairs at the University of Georgia, told Al Jazeera: “They don’t necessarily see the GOP as sharing their views, but they do believe the base is open to them.”

Explaining that although the shift taking place within the Republican Party started before Trump’s rise, he argued that it accelerated upon Trump taking office.

“In that sense, Trump is more the catalyst than the cause of the far-right shift,” Mudde said.

Spencer Sunshine, an associate fellow at Political Research Associates who follows white nationalist movements, explained that the “ideas of the alt-right are now part of the GOP”.

“Clearly, the policies of the Trumpists in the GOP are what’s driving this,” he told Al Jazeera.

In 2016, Steve Smith, a cofounder of the white nationalist Keystone United group, was re-elected to the Republican Party county committee in eastern Pennsylvania’s Luzerne County.

Smith has been a vocal supporter of Trump.

Last month, the American Defamation League released a report that documented the deaths of 18 people at the hands of white supremacists in 2017, which was double the number of the prior year.

The Southern Poverty Law Center, an Alabama-based hate monitor, attributes 100 killings or injuries to the alt-right since 2014.

Last month, John Abarr, who has a long history of white supremacist organising and recruited for the local KKK, announced his candidacy as a Democrat in Montana for the House of Representatives.

The Montana Democrats have disavowed his campaign.

On his website, Abarr said he apologises to “citizens of Montana for promoting bigotry and hate against minorities”.

Abarr, who has ran as a Republican in the past, claims to have left behind his white supremacist views, but his platform includes nativist policy prescriptions, such as the claim that “European Americans” are the target of systemic discrimination.

His website boasts of his continued support for “pride and dignity for whites”.