This is the moment a man entered a shop brandishing a baseball bat and attacked a group of men.

Argjend Canaku, 23, who was convicted of the attack advised the CCTV footage of the incident from August 14 in Blackbird Leys ‘told a terrible story’.

Sitting at Oxford Crown Court, the judge was told that Canaku armed himself with a baseball bat and a knife and then chased a group of men around a corner shop. CCTV footage showed a woman pushing a pram past the Blackbird Leys store as the gang went into the shop on August 14.

It was claimed the target who was chased through the store – had attacked Canaku. 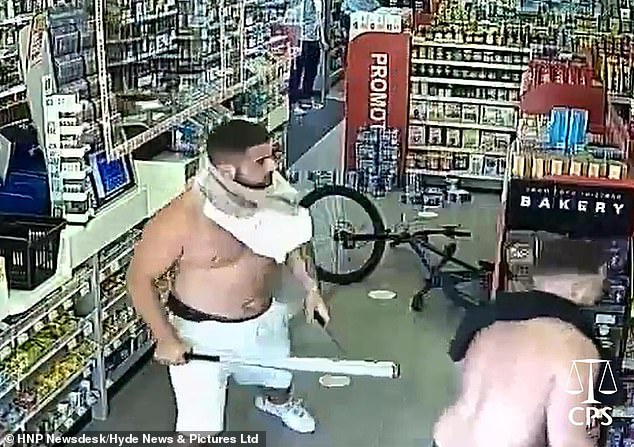 Arjend Canaku, pictured left with a baseball bat and a knife, was jailed for 22 months after he admitted attacking a group of men in a shop in Oxford Oxford Crown Court heard Argjend Canuku was involved in the drugs trade in Oxford. He admitted violent disorder, possession of a bladed article and possessive of an offensive weapon

The judge – who had heard that Canaku had previously been arrested for offences of drugs and violence but never charged – rejected his more innocent explanations.

‘This appears to me to be a series of very violent offences connected with the despicable drugs trade here in Oxford. You were part of a group carrying out a brazen, clearly targeted attack on one or more of the men who had been outside the store.

‘You were an active member of the gang, playing an important role. The one carrying not only a baseball bat but a knife, each capable of inflicting terrible, potentially fatal injuries.’

Samantha Giffin, mitigating, asked the judge to impose a community penalty or a suspended sentence as an act of mercy to her client, who had no previous convictions.

Her client had a traumatic childhood in his native Albania, where his policeman father had been murdered. After seeking asylum in the UK, he had briefly stayed with an older man before being housed by children’s social services. He had left school without formal qualifications.

Mr Recorder Bate-Williams said he was unable to impose anything other than an immediate prison sentence. He asked what message it would send to those involved in the ‘despicable drugs trade in Oxford’ if such ‘violent attacks’ did not carry a prison sentence.

Sending him down for 22 months, the judge said of the CCTV: ‘There is an expression ‘every picture tells a story’. That film told a terrible story.’