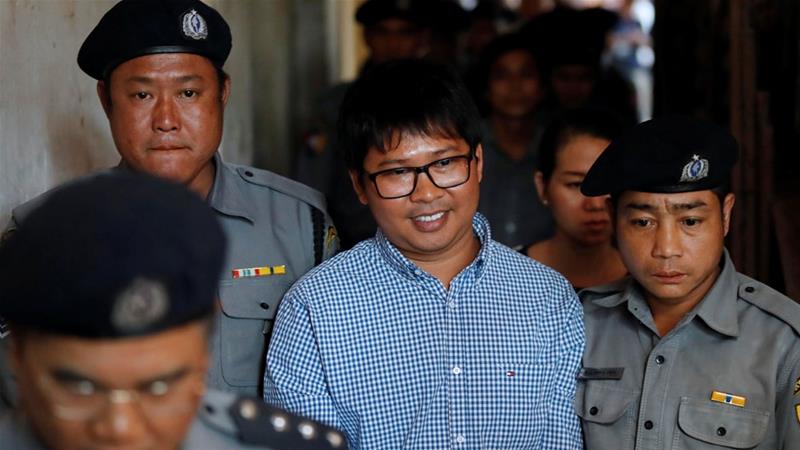 Human rights lawyer Amal Clooney has said she would represent two Reuters journalists on trial in Myanmar for reporting the massacre of the Rohingya people in western Rakhine state.

Wa Lone, 31, and Kyaw Soe Oo, 27, were arrested last December, and have been charged under the Official Secrets Act, which could see them jailed up to 14 years.

“Wa Lone and Kyaw Soe Oo are being prosecuted simply because they reported the news. I have reviewed the case file, and it is clear beyond doubt that the two journalists are innocent and should be released immediately,” Amal Clooney said in a statement released by her office on Thursday.

“The outcome of this case will tell us a lot about Myanmar’s commitment to the rule of law and freedom of speech,” said Clooney.

Gail Gove, chief counsel of Reuters, said retaining Clooney would strengthen the company’s international legal expertise and broaden efforts to secure the release of the reporters.

Human rights activists and media watchdogs have spoken against the case, which they say is an effort to intimidate the press, especially its coverage of the sensitive situation in Rakhine state where the military is accused of massive human rights abuses against the mostly-Muslim Rohingya minority.

Zaw Htay, spokesman for Myanmar’s civilian government, declined to comment after he was reached out by Reuters.

Myanmar’s ambassador to the United Nations, Hau Do Suan, said last month that the Reuters journalists were not arrested for reporting a story, but were accused of “illegally possessing confidential government documents”.

More than 600,000 Rohingya have been forced to flee to neighbouring Bangladesh after the military launched a brutal crackdown in the wake of a series of attack on army camps in late August.

Swaths of Rohingya villages have been burned down, and hundreds of women have been raped and thousands of innocent civilians killed in the “clearance operation” launched by the military.

UN Secretary-General Antonio Guterres has called for the release of journalists, who have been in prison in Yangon since their arrest on December 12.

The pair have told relatives they were arrested almost immediately after being handed some rolled up papers at a restaurant in northern Yangon by two policemen they had not met before, having been invited to meet the officers for dinner.

The district court in northern Yangon will hear arguments from prosecutors and defence lawyers on the motion to dismiss the case on April 4.