A writer who was tapped to translate the work of poet Amanda Gorman, the young black star of President Joe Biden’s inauguration, into Dutch has resigned from the assignment following criticism that a black translator wasn’t selected.

Marieke Lucas Rijneveld, who became the youngest winner of the International Booker Prize last year for their novel ‘The Discomfort of Evening’, was picked for the job by Dutch publisher Meulenhoff, which said Gorman had recommended the writer.

But after ‘uproar’ in the Netherlands over the fact that a white translator was chosen, Rijneveld, who uses the non-binary pronoun ‘they’, said they were pulling out of the job of translating Gorman’s work ‘The Hill We Climb’.

‘My heart and mind are still filled with the events of the last few days,’ 29-year-old Rijneveld said on Twitter late Monday, adding that they would publish their own poem on the row this weekend. 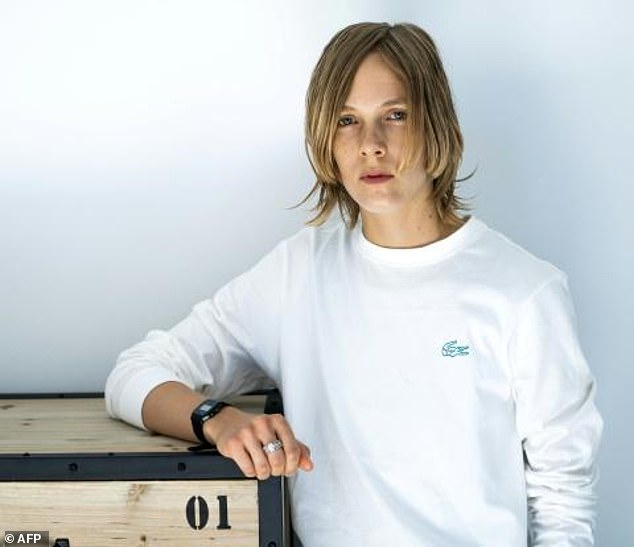 Marieke Lucas Rijneveld (pictured), who was chosen to translate the work of  poet Amanda Gorman into Dutch has resigned from the assignment following ‘uproar’ over the fact that a black translator wasn’t selected 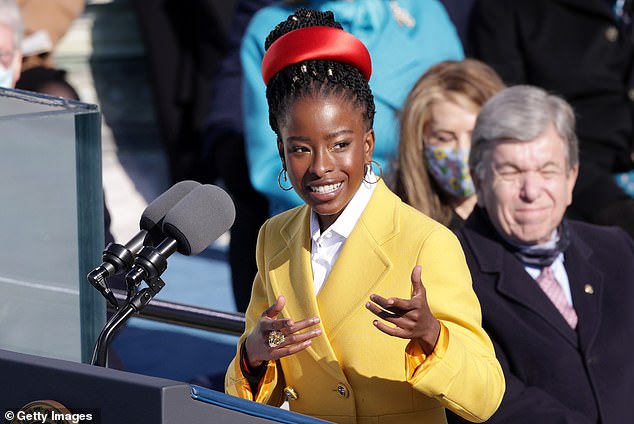 The appointment of Rijneveld – whose novel described the effects of a tragedy on a family of religious Dutch cow farmers, from the perspective of a young girl – had sparked a backlash on social media in the Netherlands.

The outrage was led by black journalist and activist Janice Deul, who penned an article about the issue in the Dutch newspaper Volkskrant. 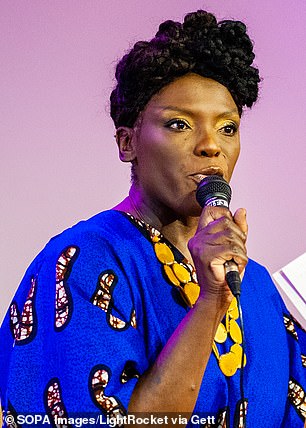 The outrage was led by journalist and activist Janice Deul (pictured), who penned an article slamming Rijneveld’s appointment last week

‘An incomprehensible choice, in my view and that of many others who expressed their pain, frustration, anger and disappointment via social media,’ Deul wrote.

‘Isn’t it – to say the least – a missed opportunity to [have hired] Marieke Lucas Rijneveld for this job? They are white, nonbinary, have no experience in this field, but according to Meulenhoff are still the “dream translator”?’

Deul described Gorman, the US National Youth Poet Laureaute, as a ‘spoken-word artist, young, female and unapologetically Black’, and said her translator should fit that mold as well.

But many others on social media opposed Deul’s view, saying that Meulenhoff was right to pick Rijneveld if that’s what Gorman wanted.

Rijneveld, who had shared their excitement over the appointment on February 23, reacted to the backlash on Twitter late last week.

‘I am shocked by the uproar surrounding my involvement in the spread of Amanda Gorman’s message and I understand the people who feel hurt by Meulenhoff’s choice to ask me,’ the writer tweeted.

Rijneveld said Gorman’s team ‘has made it known that they still stand behind’ them as the choice of translator, adding that it would have been a ‘great and honorable assignment’ to translate her poetry.

‘I had poured all my love into translating Amanda’s work, seeing it as the greatest task to keep her strength, tone and style.

‘However, I am well aware that I am in a position to think and feel that way, where many are not.’ 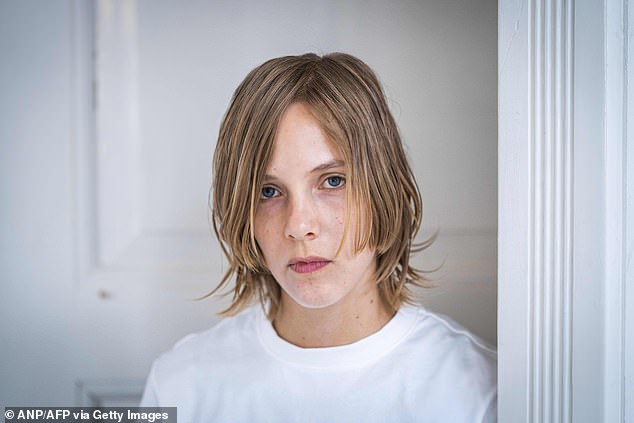 Rijneveld (pictured) Gorman’s team ‘has made it known that they still stand behind’ them as the choice of translator, adding that it would have been a ‘great and honorable assignment’ to translate her poetry

Publisher Meulenhoff said the reactions had ‘touched us and brought us to new insights’ and that they understood Rijneveld’s decision.

‘We are going to look for a team to cooperate with to translate Amanda’s words and message of hope and inspiration as well as possible and in her spirit,’ Meulenhoff general director Maaike le Noble said.

Deul responded to the development in a tweet on Friday, writing: ‘Thank you for this decision.’

The tweet was met with more criticism from users who said Deul’s unfair outrage forced the decision.

‘Apparently succumbed to your disgusting woke anti-white racism,’ one user wrote in Dutch. ‘Just be proud of it. Why do black woke diversity dreamers think they are so incredibly unique and special?’

Gorman, 22, became an international sensation after reciting her original work ‘The Hill We Climb’ at Biden’s inauguration.

The poem was inspired by the January 6 attack on the US Capitol and declared that democracy ‘can never be permanently defeated’.

The French translation of Gorman’s work is being done by Belgian-Congolese singer Marie-Pierra Kakoma, who goes by the stage name Lous and the Yakuza. 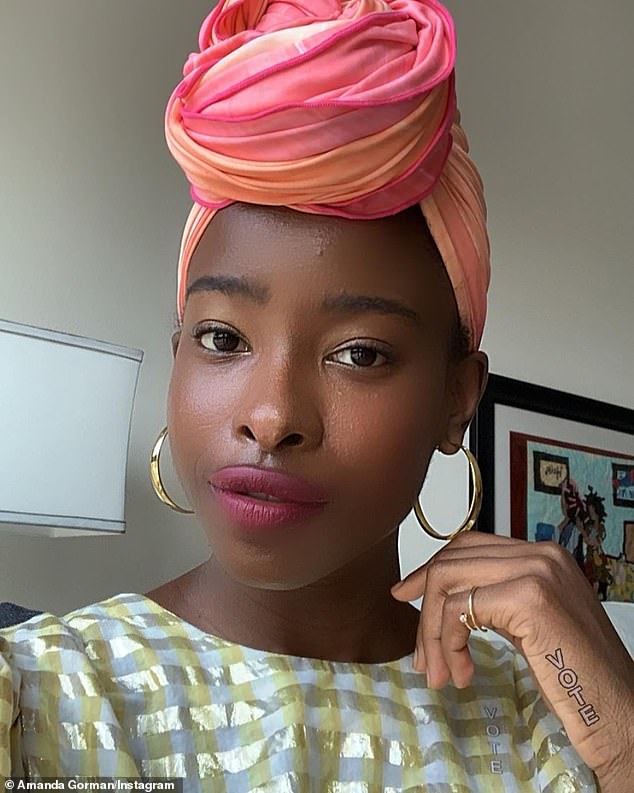 Amanda Gorman’s Inaugural Poem ‘The Hill We Climb’ in full

Mr. President, Dr. Biden, Madam Vice President, Mr. Emhoff, Americans and the world, when day comes, we ask ourselves where can we find light in this never-ending shade? The loss we carry, a sea we must wade. We braved the belly of the beast.

We’ve learned that quiet isn’t always peace, and the norms and notions of what just is, isn’t always justice. And yet the dawn is hours before we knew it, somehow we do it, somehow we’ve weathered and witnessed a nation that isn’t broken but simply unfinished.

We, the successors of a country and a time, where a skinny Black girl descended from slaves and raised by a single mother can dream of becoming president, only to find herself reciting for one.

And yes, we are far from polished, far from pristine, but that doesn’t mean we are striving to form a union that is perfect. We are striving to forge our union with purpose, to compose a country committed to all cultures, colors, characters and conditions of man. And so we lift our gazes not to what stands between us but what stands before us. We close the divide, because we know to put our future first, we must first put our differences aside.

We lay down our arms so we can reach out our arms to one another. We seek harm to none and harmony for all. Let the globe, if nothing else, say this is true, that even as we grieved, we grew. That even as we hurt, we hoped.

Scripture tells us to envision that everyone shall sit under their own vine and fig tree, and no one shall make them afraid.

If we’re to live up to our own time, then victory won’t lighten the blade, but in all the bridges we’ve made, that is the promise to glade, the hill we climb if only we dare, it’s because being American is more than a pride we inherit. It’s the past we stepped into and how we repair it.

We’ve seen a force that would shatter our nation rather than share it, would destroy our country if it meant delaying democracy.

And this effort very nearly succeeded. But while democracy can be periodically delayed, it can never be permanently defeated. In this truth, in this faith, we trust. For while we have our eyes on the future, history has its eyes on us.

This is the era of just redemption. We feared at its inception. We did not feel prepared to be the heirs of such a terrifying hour, but within it we found the power to author a new chapter, to offer hope and laughter to ourselves.

Because we know our inaction and inertia will be the inheritance of the next generation. Our blunders become their burdens. But one thing is certain. If we merge mercy with might and might with right, then love becomes our legacy, and change, our children’s birth right.

We will rebuild, reconcile, and recover, in every known nook of our nation, in every corner called our country, our people diverse and beautiful, will emerge battered and beautiful. When day comes, we step out of the shade, aflame and unafraid.