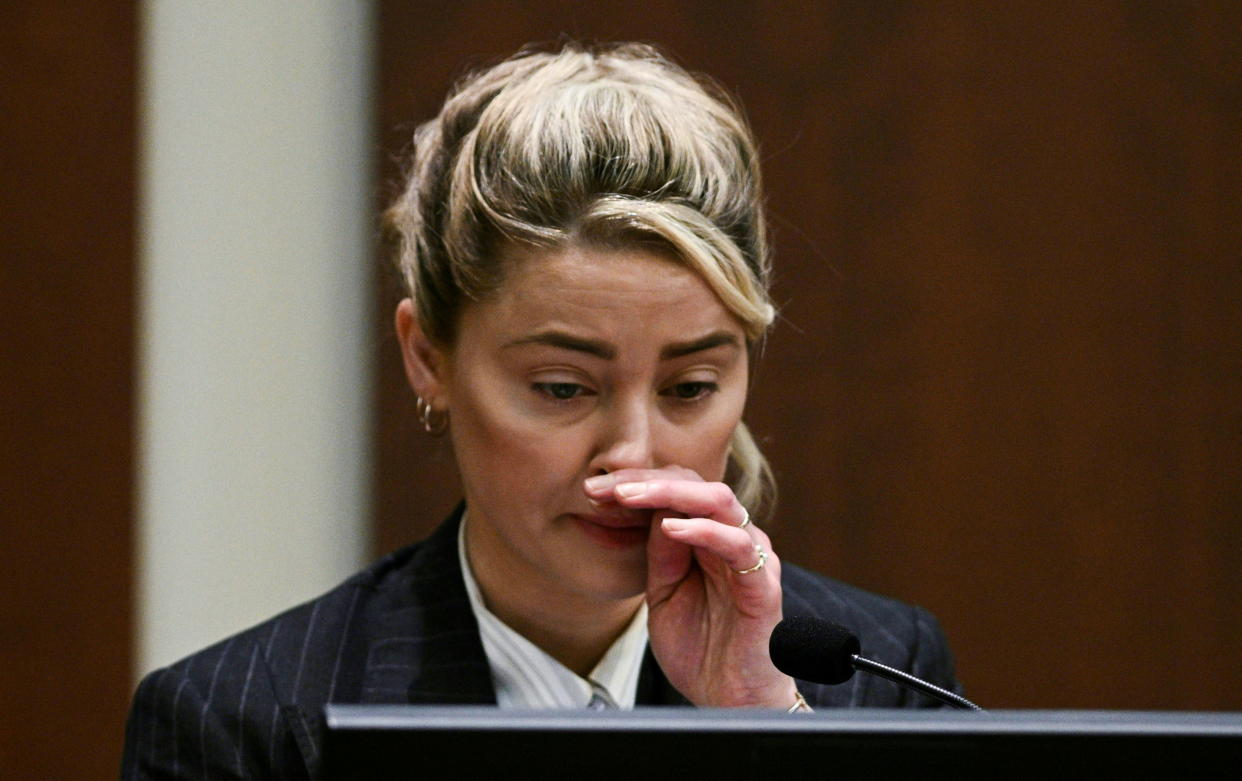 Amber Heard ended her testimony on Tuesday after four-days on the stand. Her relationship with James Franco was once again a topic in court. But the Aquaman star, 36, seemed prepared for what Johnny Depp's attorney threw her way, including an old domestic violence charge in 2009.

"I've never assaulted Mr. Depp or anyone else I've been romantically linked to, ever," Heard told the court as cross-examination concluded.

Heard was charged with misdemeanor domestic violence after a fight with ex-wife, Tasya van Ree, at the Seattle-Tacoma International Airport. The old story was leaked to TMZ shortly after Heard filed for a temporary restraining order (TRO) from Depp in 2016. Ree issued a statement at the time calling the disagreement a "misunderstanding" and that Heard was "wrongfully accused" of assault. The charges were ultimately dropped.

Whether Heard or Depp was responsible for leaking stories to the press was a point of contention between the actress and his lawyer, Camille Vasquez. Heard accused Depp's divorce attorney, Laura Wasser, of planting negative stories. Vasquez suggested Heard sold the video of Depp smashing cabinets to TMZ and that the outlet owns the rights. Vasquez accused Heard of staging a photo shoot and calling the paparazzi when she filed for the TRO.

"What does that get me? If I wanted to leak things about Johnny I could have done that in much more successful way, in a bigger way for years," Heard said, denying she tipped off TMZ about their divorce.

"Not when you were extorting him for $7 million," Vasquez said, referencing the divorce settlement Heard received.

"I got a fraction of what I was entitled to in the state of California by the way," Heard replied. "What extortion?"

During redirect, Heard's attorney Elaine Bredehoft asked why Depp vowed to never look her in the eyes again after they met in July 2016.

"Because he's guilty," Heard told the jury. The 36-year-old actress got emotional. "He knows he's lying. Otherwise, why can't he look at me? I survived that man and I'm here, and I'm able to look at him."

WATCH #AmberHeard says #JohnnyDepp can't look her in the eyes because "He' guilty. Otherwise why can't he look at me? I survived." @LawCrimeNetworkpic.twitter.com/0Hl3VGf0eL

Heard maintained to her lawyer that she was not looking for a financial settlement by levying abuse claims, and that she could have gotten around $32 million from Depp.

"I realized that's what I was entitled to, but I didn't want it. It's that simple," she declared.

Earlier on Tuesday, a video was played in court of James Franco visiting Heard on May 22, 2016 — one day before she filed for divorce from Depp. The late-night visit was after 11 p.m. Heard previously testified that Depp "hated" Franco, whom she worked with on two films, and was extremely jealous of the actor.

The video footage of Franco and Heard was taken inside the elevator of the Eastern Columbia Building in Los Angeles where the actress lived with Depp. Franco appears to put his head on Heard's shoulders and she leans into the actor.

CCTV video shown of James Franco getting in the elevator with #AmberHeard the night after the fight at the penthouse when police were called. #JohnnyDepppic.twitter.com/jBm3GwdbWL

Heard explained that she was trying to get "as much friendship at that time as I could possibly get" and that Franco was a neighbor.

"What did Mr. Franco do in the elevator before laying his head on your shoulder?" Bredehoft asked.

"He kind of touched the side of my face and responded to what he saw," Heard replied.

Franco was listed as a possible witness for Heard, but will reportedly not testify. The actress's team continued to present their defense case on Tuesday afternoon after the actress was done on the stand. Depp is suing Heard for $50 million for an op-ed she wrote in the Washington Post. Heard is countersuing the actor for $100 million.

Heard's friend iO Tillett Wright was the second witness called. He gave his testimony in a video deposition. The photographer lived in one of Depp's penthouses during the former pair's relationship. Wright claimed that the actor was "very open" in confiding about his substance abuse.

"Alcohol would bring out a very ugly side of him," Wright claimed.

Wright testified he witnessed Depp verbally abuse the actress. He also said he overheard an instance when Heard was allegedly physically attacked on May 21, 2016. The topic shifted back to the apparent "human fecal matter" that was left in Depp and Heard's bed weeks prior. Depp believed it was either Heard or Wright who defecated during the prank. Heard called Wright during her meeting with Depp.

Wright "started laughing," which purportedly angered Depp. The actor allegedly threatened to "peel" the actress's hair back, according to Wright, and yelled, "you think I hit you."

"I remember her screaming," Wright claimed. Depp previously testified that no such attack occurred.

Heard's former best friend, Raquel "Rocky" Pennington was the next witness called. Her video testimony will resume on Wednesday.