Caracas: The United States has announced it is pulling the remaining staff from its embassy in Venezuela, citing the deteriorating situation in the South American nation.

Secretary of State Mike Pompeo announced the decision as Venezuela struggles to restore electricity following four days of blackouts around the country and a deepening political crisis.

The US has led an effort to oust socialist President Nicolas Maduro and replace him with opposition leader Juan Guaido, who vows to hold a new presidential election. Guaido is backed by some 50 countries, while Maduro maintains crucial support from countries such as China, Russia and Cuba. 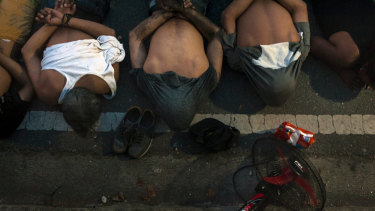 People lie on the ground after being detained for allegedly looting a supermarket during a continued power outage in Santa Cruz del Este, Caracas, Venezuela.Credit:Bloomberg

Maduro had ordered all American diplomats to leave Venezuela in late January because of its support from Guaido, but he retreated and allowed them to stay. The US still withdrew dependents of embassy personnel as well as some of the staff. Now Pompeo says the remaining diplomats would be out of Venezuela by the end of the week.

The move came as one of the country's most respected military analysts warned it is on course for civil war.

"If the US go in, it'll be three days. If the Colombians go in, maybe a week," said retired colonel Jose Machillanda.

"But there will likely be chaos building up to that. The rifles and pistols and automatic weapons will come out. We're heading towards civil war."

Pompeo's announcement came after another day of chaos as power outages that began on Thursday evening continued to cause problems for Venezuelans on Monday, leaving them with little power, water and communications. 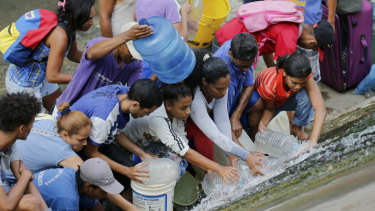 People collect water falling from a leaking pipeline along the bank of the Guaire River during rolling blackouts, which affects the water pumps.Credit:AP

People converged on a polluted river to fill water bottles in Caracas, and scattered protests erupted in several cities.

A three-year-old girl with a brain tumour languished in a Caracas hospital, awaiting treatment after doctors started surgery but then suspended the operation when nationwide power outages first hit, said the girl's fearful mother, who only gave her first name, Yalimar.

"The doctors told me that there are no miracles," said Yalimar, who hoped her daughter could be transferred on Tuesday to one of the few hospitals in Venezuela that would be able to finish the complex procedure.

The girl's story highlighted an unfolding horror in Venezuela, where years of hardship got abruptly worse after the power grid collapsed. On Monday, schools and businesses were closed, long lines of cars waited at the few petrol stations with electricity and hospitals cared for many patients without power. Generators have alleviated conditions for some of the critically ill. 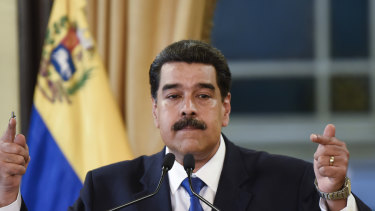 President Nicolas Maduro said on national television Monday night that progress had been made in restoring power in Venezuela. He also said two people who were allegedly trying to sabotage power facilities were captured and were providing information to authorities, though he gave no details.

Guaido, who heads the opposition-controlled congress, and the United States say Maduro's claims that the US sabotaged the power grid with a " cyber attack" are an attempt to divert attention from the government's own failings.

There have been acts of kindness during Venezuela's crisis: People whose food would rot in refrigerators without power donated it to a restaurant, which cooked it for distribution to charities and hospitals.

The blackouts also have hit the oil industry. The country hasn't shipped $US358 million ($506 million) in oil since the power failures started, and "the whole system is grinding to a halt," said Russ Dallen, a Miami-based partner at the brokerage firm Caracas Capital Markets.

Two large tankers are sitting empty at the Jose offshore oil-loading dock, and at least 19 other ships were waiting their turns there, Dallen said. 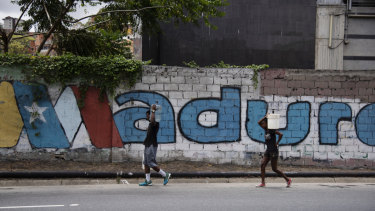 Engineers have restored power in some parts of Venezuela, but it often goes out again. There have been a few protests in Caracas and reports of similar anti-government anger elsewhere. Guaido tweeted about reports of looting in some cities, but details were difficult to confirm.

Security forces in the city of Maracaibo dispersed "criminals" trying to take advantage of the power cuts, Mayor Willy Casanova told local media. However, numerous videos posted on social media that purported to be from Maracaibo showed crowds roaming the streets and people running from looted, damaged buildings with no police in sight.

In Caracas, some people reported more sightings of "colectivos", a term for armed groups allegedly operating on behalf of the state to intimidate opponents.

The mood in Caracas was desperate. 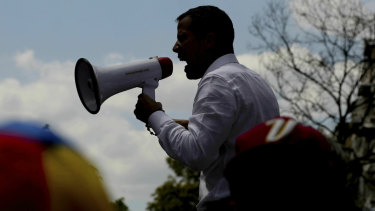 Marian Morales, a nurse working for a Catholic youth group, and several colleagues handed out baby nappies and food from a car parked near a hospital. Police and men in civilian clothing ordered them to leave, saying they didn't have permission.

Morales said the needy are cautious about approaching to collect the handouts because of the presence of security forces.

Early on Monday, an explosion rocked a power station in the Baruta area of Caracas. Residents gathered to look at the charred, smouldering equipment.

Guaido said three of four electricity transformers servicing the area were knocked out. He has blamed the blackouts on government corruption and mismanagement.

Winston Cabas, the head of Venezuela's electrical engineers union, which opposes the government, disputed government allegations that the country's main hydroelectric dam was sabotaged last week. He blamed a lack of maintenance as well as the departure of skilled workers from the troubled country over the years.

"The system is vulnerable, fragile and unstable," he said.

Spain's airline pilots union asked for Spanish airline Air Europa to stop flying to Venezuela after one of its crews was attacked at gunpoint in Caracas. The Sepla union said two pilots and eight more crew members of a flight from Madrid were assaulted on Saturday while going from the airport to their hotel in the Venezuelan capital. None of the crew members was injured.

Air Europa responded by ordering the crews of flights to Venezuela to not spend the night in the country, according to the union.

The administration of US President Donald Trump imposed sanctions on a Moscow-based bank jointly owned by Russian and Venezuelan state-owned companies, alleging it tried to circumvent US sanctions on the South American country. The US said it is targeting Evrofinance Mosnarbank for supporting Petroleos de Venezuela, the state oil company previously targeted by sanctions in January.

Evrofinance said it was carrying out its activities normally despite the announcement and pledged to "meet its obligations to the clients and partners in full."

The US and the other governments that recognise Guaido as the country's interim president say Maduro wasn't legitimately re-elected last year because opposition candidates weren't permitted to run. Maduro says he is the target of a US coup plot.