A Briton was today named as the new Governor of the Bank of England and will take over from Mark Carney after Boris Johnson rejected the female favourite who was anti-Brexit.

Andrew Bailey, 60, head of the Financial Conduct Authority, will replace Mr Carney at the helm of the 325-year-old institution on March 16 after the Canadian agreed to delay his departure from January 31 – the day the UK is set to leave the EU.

Mr Bailey, a former deputy governor, is seen as a safe pair of hands and earned the nickname ‘Bailey of the Bank’ after working there for 30 years before heading to the FCA in 2016.

He has beaten Dame Minouche Shafik to the top job – despite the Egyptian-born academic being widely tipped to become the first woman to take the helm. Treasury insiders said the 57-year-old’s opposition to Brexit counted against her at No 10.

Mr Bailey’s appointment was recommended to the Queen by Boris Johnson and announced by Chancellor Sajid Javid, who described him as the ‘clear frontrunner’ today despite bookies and insiders saying otherwise until late yesterday.

During his time in charge of the FCA the watchdog has been branded ‘soft touch’ and was recently accused of falling asleep at the wheel as Neil Woodford’s flagship fund went into meltdown. It has also been seen as being behind the curve on payday lending and failing to crackdown on banking abuses.

But his appointment has been hailed as a victory for the Treasury because he has been positive about post-Brexit Britain and slammed the EU this year for a lack of flexibility in planning for a No Deal. Mr Carney, in contrast, has been widely criticised for his doomsday Brexit warnings since Britain voted to leave the EU in 2016. 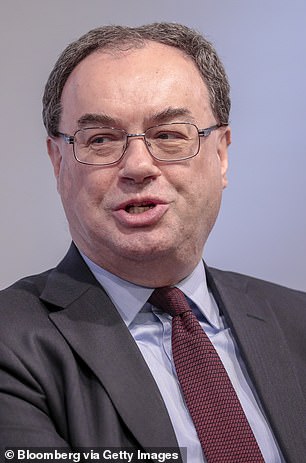 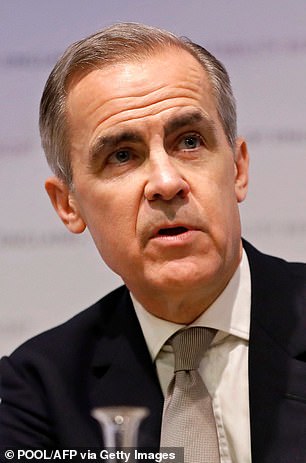 Andrew Bailey, 60, worked for 30 years at the BoE before moving in 2016 to his current job as chief executive of the Financial Conduct Authority and will replace Mark Carney, a Canadian, who is due to stand down on January 31

His appointment has upset the odds, as Minouche Shafik, Egyptian-born boss of the London School of Economics, had been strongly tipped to become the first woman to take the helm.

Dame Minouche, who was deputy governor at the Bank, is understood to have been told earlier this week that she was out of the race, according to the Financial Times.

Although the Bank of England is meant to be strictly independent, it is understood that the 57-year-old’s opposition to Brexit counted against her.

In City circles, Dame Minouche is said to have expressed strong reservations about leaving the EU – which could have caused tensions with Downing Street.

In a statement, Andrew Bailey said: ‘It is a tremendous honour to be chosen as Governor of the Bank of England and to have the opportunity to serve the people of the United Kingdom, particularly at such a critical time for the nation as we leave the European Union.

The new Bank of England Governor is a grammar schoolboy father-of-two who winds down with his academic wife breeding budgerigars.

Mr Bailey, who is from Leicester and was educated at Cambridge, has long been tipped as a strong domestic candidate to replace Canadian Mr Carney.

The West Brom fan is married to American-born Cheryl Schonhardt-Bailey, a Professor in Political Science at LSE and expert in US Presidents and and their relationship with British Prime Ministers.

The couple live in the Kent countryside with their two children – and also have a holiday home in Idaho in the United States.

‘The Bank has a very important job and, as Governor, I will continue the work that Mark Carney has done to ensure that it has the public interest at the heart of everything it does. It is important to me that the Bank continues to work for the public by maintaining monetary and financial stability and ensuring that financial institutions are safe and sound.

‘I am committed to the Bank being an accessible and approachable institution, as well as an open and diverse place to work.

‘I would like to pay tribute to my colleagues at the Financial Conduct Authority for their support during my time as chief executive and the excellent work they do.’

Mr Javid also thanked outgoing governor Mark Carney and confirmed he had agreed to remain in the post until March 15 to oversee the transition.

The Chancellor said: ‘Mark has lead the Bank with conviction, rigour and intelligence through some of its most challenging times in modern history. Thank you for your leadership’.

Shadow chancellor John McDonnell tweeted: ‘As an establishment figure with what some consider is a less than inspiring record at the FCA Andrew Bailey will need to demonstrate early that he appreciates the need to address the deep structural problems of our economy & like Mark Carney understands the climate change threat.’ 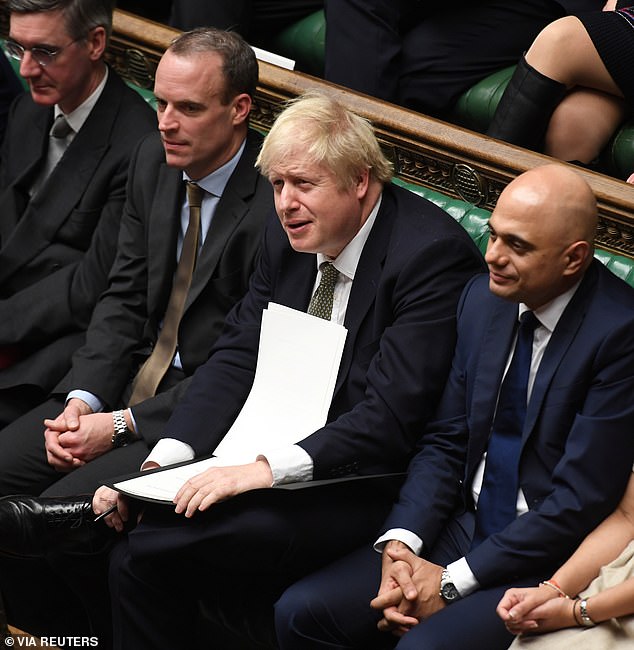 Andrew Bailey was today described as the clear frontrunner for the top job at the Old Lady of Threadneedle Street.

But his hopes of getting the Governor’s job had appeared to be dented after a string of scandals during his more recent tenure as boss of the Financial Conduct Authority, which is meant to protect savers and investors.

The City watchdog was heavily criticised after thousands of investors were denied access to their money held in a failing flagship fund run by Neil Woodford.

They continued to be charged millions of pounds in fees and the fund was eventually wound down, leaving savers nursing hefty losses. Mr Bailey told MPs that Mr Woodford’s investment firm should consider waiving its fees, but the FCA was criticised for doing nothing to help stranded investors.

There were also calls for an investigation into the FCA after the collapse of London & Capital Finance with £236million of savers’ money.

More than 11,000 savers were misled into investing in a high-risk bond scheme which promised attractive returns. A criminal investigation by the Serious Fraud Office has resulted in five arrests so far. The FCA was heavily criticised for failing to step in earlier.

Widely respected, Mr Bailey was seen as a safe pair of hands when he worked at the Bank during the financial crisis, and was promoted to the position of deputy governor after 30 years there.

The identity of the new governor has been kept secret by Downing Street and the Treasury. At the weekend, the Treasury insisted no decision had been made.

Kevin Warsh, a former top official at the US Federal Reserve and Raghuram Rajan, the former governor of the Bank of India, have both been tipped.

Boris Johnson’s former economic adviser Gerard Lyons, a staunch advocate of Brexit, has also been in the running. According to the Financial Times, Mr Lyons did not perform well in the interview.

As a Crown appointment, the governor will be formally chosen by the Queen on the Prime Minister’s recommendation.

Yesterday William Hill made Dame Minouche the 11/10 favourite, followed by Mr Bailey at 8/1 and the Bank’s chief economist Andy Haldane at 10/1.

The governor is one of the most powerful jobs in the UK, with responsibility for setting interest rates, the health of the banking system and financial stability.

The appointment came as the Bank of England was in turmoil after it emerged traders had hijacked a secret audio feed of press conferences for financial gain.

The breach meant the traders had access to market sensitive briefings by senior figures such as Governor Mark Carney before their rivals.

As City grandees called for heads to roll, the central bank and financial regulator were blasted over the ‘major failure’. 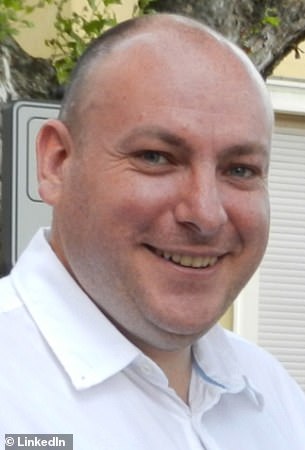 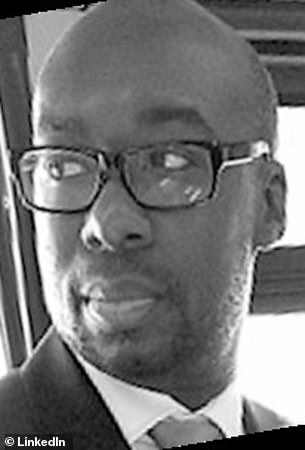 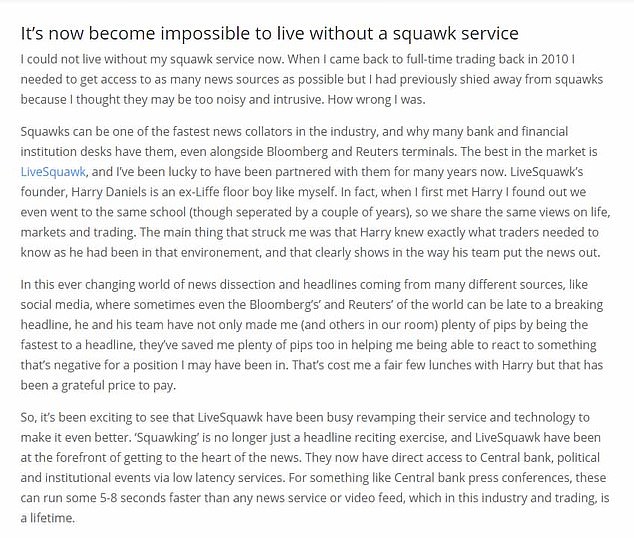 Bank of England press conferences feature announcements by governor Mark Carney and other senior officials and can often move currency and bond markets if they give hints on the future path of interest rates.

They are broadcast via video feed, which is fed out through a fibre optic cable before reaching paying clients.

However, there is a second audio feed that is used as back-up to the video one. The Bank claims a ‘third-party’ involved in running the audio feed had been selling recordings to financial clients.

This would have allowed these clients knowledge of market movements before their competitors, potentially allowing them to reap millions.

The ‘third party’ has now been referred by the Bank to the Financial Conduct Authority.

The internal audio feed of the Bank’s press conferences, which was intended to be used as a back-up if the official broadcast video failed, was hijacked by a third party believed to be Essex-based video technician Encoded Media.

The technician then allowed market news service Livesquawk to broadcast this illicit feed to its clients, including major investment banks and hedge funds.

Because audio feeds can be distributed faster than videos, these clients received information from the press conference before anyone else.

Comments given in Bank of England press conferences, such as tiny changes in language by officials, can cause large movements in the pound and assets such as gilts – UK Government bonds. Hearing these comments before anyone else meant traders could place bets split seconds before rivals, taking advantage of movements and potentially pocketing millions.

Traders reportedly boasted of making ‘plenty’ of money and called the five to eight-second headstart on competitors a ‘lifeline’.

The scandal, first reported by The Times this week, is now being investigated by the Financial Conduct Authority.

But former City minister Lord Myners said last night: ‘This is a major failure by the Bank of England and raises important questions about how the FCA had not picked up that this was happening. This is serious.’