But as confusion continued to reign on Saturday over the unexpected arrival of 17 travellers from across the Tasman in the locked-down Victorian capital, the federal government gave no sign it was willing to help, setting up a tense day on Sunday when two more planes from New Zealand are due to touch down in Sydney. 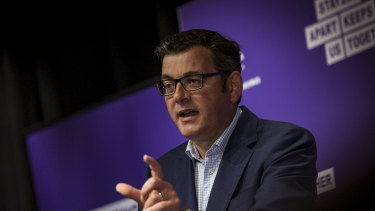 NSW Premier Gladys Berejiklian made clear in a statement on Saturday that her government would not be preventing passengers from travelling to Victoria, with a spokeswoman saying the issue was a matter for the southern state.

It also emerged that Mr Andrews' own department had given one of the arrivals from NZ the green light two weeks ago to travel onward to Victoria although the advice, from the Department of Premier and Cabinet, was issued before Mr Andrews had officially declared his state was not joining the travel bubble.

Victorian authorities spent much of Saturday trying to track down the travellers, with the Premier conceding the state's health department had no power to stop passengers, detain them or force them into quarantine if they had arrived from interstate, rather than overseas.

Mr Andrews pointed the blame at the New South Wales and federal governments for the Friday arrivals and wrote to Prime Minister Scott Morrison asking that any onward travel from Kiwi arrivals be halted in time for the flights due into Sydney from Auckland on Sunday.

"I urgently request your action to prohibit onward travel of passengers under the Safe Travel Zone arrangements into Victoria," the Premier wrote.

"This action would avoid the need for Victoria to close its borders – an intervention that I have resisted throughout this pandemic."

The Premier also advised the Prime Minister that Victoria wanted to push its moratorium on inbound international flights out until mid-November.

Acting federal Immigration Minister Alan Tudge said the arrivals should not have come as a surprise to the Andrews government because it had been discussed at the nation's top health committee on Monday.

"No official from any jurisdiction raised concerns in relation to that," Mr Tudge said. "There was an understanding that when Kiwis arrived into Sydney from a country which has zero community transmissions that there would be no need for quarantining and that once they had arrived into Sydney that they would be treated like any other person in New South Wales."

A federal health spokeswoman confirmed that Victorian Chief Health Officer Brett Sutton was present at the October 12 Australian Health Protection Principal Committee meeting in which the "matter of onwards travel from NSW for arriving travellers from NZ was discussed".

The spokeswoman said the discussion explicitly related to the fact arrivals would be able to on-travel from NSW.

"All Chief Health Officers were present. The AHPPC also met with representatives of ABF on Tuesday October 13 to discuss the arrangements," she said.

Mr Tudge tweeted that Professor Sutton "did not raise any concerns" in the discussions.

The confirmation from federal authorities contradicts what the Chief Health Officer told media on Saturday – that he was not at the meeting on Monday October 12.

"I wasn't there on Monday," Professor Sutton said.

Mr Andrews said the NZ arrivals, who flew into Sydney Airport on Friday and boarded a Jetstar flight to Melbourne that afternoon, had done nothing wrong and were not regarded as a COVID risk.

The Prime Minister's Office would not comment on Saturday but senior government sources say there is no reason why Victoria should not allow travellers from New Zealand in because there was so little transmission of the virus — less than in NSW in some recent days — in that country and when they arrived are subject to the same restrictions as other Victorians.

If the Victorian government has a problem with New Zealanders arriving, then the Andrews government should enact its own restrictions, the federal sources argue.

Border Force gave Victorian authorities the passengers arrival cards, which contain their planned addresses and contact details in Australia, on Saturday lunch time to help them find and inform the travellers of Victoria's coronavirus restrictions.

One Australian permanent resident, who spoke to The Age and Sydney Morning Herald on the condition of anonymity, flew into Melbourne on the 4.50pm Friday Jetstar flight after travelling from Auckland earlier in the day.

The man told multiple ground staff at Sydney Airport he was planning on travelling through to Melbourne, but he was not stopped or detained after passing temperature testing.

"There was nothing saying you couldn’t enter Melbourne once you’re in the country, only that you had to fly to New South Wales," he said.

"If you’re open to one, you’re open to all because people from New Zealand are deemed no risk for COVID and Victoria’s borders are open. I think the system needs clarifying."

The Age has also seen an email from the Premier's Department, sent on October 12 in response to a query about travel from NZ via Sydney which clearly advised that Victoria's borders were open and that the traveller was free to arrive in the southern state.

Four days later, Mr Andrews wrote to Mr Morrison, officially advising that Victoria would not be participating in the quarantine-free travel deal with New Zealand.