As Merkel hands CDU leadership to her successor, analysts say open-door immigration policy has given rise to far right. 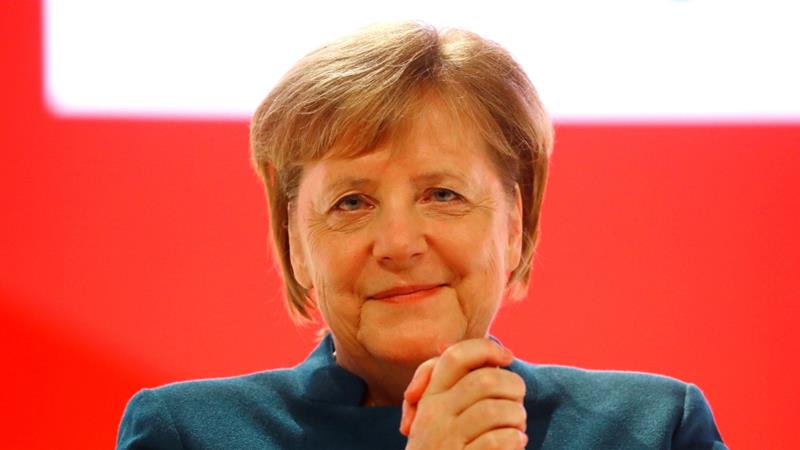 It has been described by German media as the “decision of her life”. When Angela Merkel let more than 800,000 refugees into the country in the summer of 2015, few could have predicted the fallout from that.

Over the past three years, her government has been embroiled in bitter political infighting and the surge in support for right-wing policies and the populist party Alternative for Deutschland (AFD) has led commentators to question just how much this decision led to her departure.

On Friday, the Christian Democratic Union of Germany (CDU), the party Merkel led for 18 years, chose Annegret Kramp-Karrenbauer as her successor. Reportedly backed by Merkel, Kramp-Karrenbauer’s win is said to be a late victory for the outgoing leader.

Stepping down officially in 2021, it’s the start of the long road to the end for Merkel at the helm.

Berlin-based Anne Lehman is the co-head of the domestic newsdesk at Taz.de newspaper. On the key issue of immigration, she describes a mixed legacy.

“On one side of society, she still stands for liberal values and a supporter of an open-door migration policy. On the flip side, the immigration policy has helped give space to the rise of AFD. They said that everyone who is against Merkel should vote for us because we are strictly against refugees, and they got substantial votes.

“There are many people who think it’s good that somebody is coming in who has a different opinion, and who will maintain a stricter immigration policy.”

Lehman says the reality in Merkel’s Germany is a policy towards migrants and refugees that has shifted to the right. She points to recent developments such as the opening of new migrant centres called ANKAR – an acronym for arrival, decision, return – which have been described as prisons by those forced to live in them.

“Limits have also been placed on the number of refugees who are allowed in, there’s more support for deportations and attempts to make more deals with Turkey and other countries to send back migrants,” she says.

Those working on the issue say these policies are eroding rights.

Michaela Streibelt, a Berlin-based lawyer and human rights activist, says, “What Merkel did wasn’t superhuman but compared to other countries she did pretty well.”

“In the end, she represented a balance to the discourse within the conservatives.

“In the last few years, though, she has contributed to a complete erosion of refugee rights, with tougher integration rules, longer stays in shelters and a border control system controlled by repressive governments,” Streibelt says.

Among those who have arrived from Syria, opinions on Merkel are equally mixed. Hayyan Al-Yousouf, a 38-year-old Syrian agricultural engineer, arrived in Germany in 2014. He tells Al Jazeera that for many refugees, she will be difficult to replace.

“Her effort and attention to refugees was great,” he says. “There are many refugees who are grateful to Merkel for risking her political future with the open-door policy. It’s a view that I still see people sharing online.”

He says that instead of dismissing what she’s done, it’s better to build on her efforts, for example, reducing tough language requirements so people can enter the jobs market quicker.

Lina Elabdalla, a 28-year-old Syrian writer and architect who has been living in Berlin for two years, shared a different perspective.

She tells Al Jazeera, “She may be seen as a saviour by some, but what she did, she did for Germany. This country is an economic powerhouse, and to sustain this position, they need working youth and refugees can fill these positions.”

“I’ve had a horrible experience here. I have been put in one of the worst camps, I’m still waiting for my papers two years on, and at one point I was going to be deported to Poland. An asylum officer once said to me I was a Syrian before I was a human being. Whatever Merkel was trying to achieve, it hasn’t worked for me.”

Legacy on other issues

Beyond the immigration debate, commentators are more positive about the legacy Merkel, 64, could leave behind.

In an interview with the New York Times, Ines Pohl, the editor-in-chief of the public broadcaster Deutsche Welle, cited Merkel’s achievements on the economy and German identity. She said, “Angela Merkel allowed Germans to be proud again.”

“She never boasted that Germany got what it wanted after summit meetings (though it mostly did). But as exports and domestic demand boomed, Germany prospered and so did Ms Merkel’s popularity ratings.”

With heated discussions around immigration and refugees happening across Germany and Europe, and still three years left to go, it’s likely, though, that this will be the issue that defines Merkel’s legacy.