The Andrews government will investigate ways to find homes for laboratory animals once they are no longer needed for medical research, under a plan advocates say could prevent animals being put down unnecessarily.

More than 1.5 millions animals including cats, dogs and koalas were used in Victoria for medical research, experiments and surgical skills training in 2017, with more than a quarter of those dying by the end of the study, according to the latest Department of Agriculture figures. 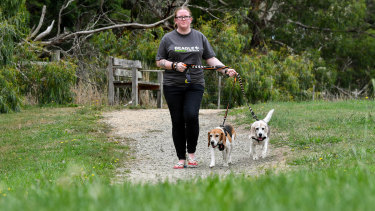 Nikki Steendam with her beagles Freckle and Ged.Credit:Joe Armao

The state could become the first to make it mandatory to rehome animals at the end of research projects after the government committed $50,000 in the previous state budget to establish a taskforce that will make findings and recommendations on the most effective model to rehome pets, including animals used in medical research.

Current guidelines state “opportunities to rehome animals that are not needed for tissue analysis should be considered wherever possible”.

“Investigators must make arrangements for animals at the conclusion of a project,” the department states.

“If appropriate, animals may be returned to normal husbandry conditions or their natural habitat. When results rely on tissue analysis, this usually requires the humane killing of the animals. Opportunities to rehome animals that are not needed for tissue analysis should be considered wherever possible.”

It will recommend changes to regulations to improve the welfare of dogs and cats – including lab animals – that need to be rehomed, as well as establishing a system to improve transparency when animals are moved between shelters, pounds and rescue groups. 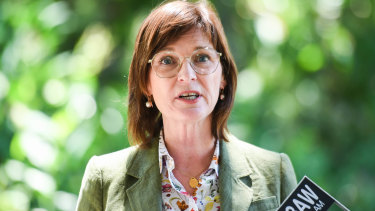 “Hard data and facts will guide our ongoing efforts to improve the welfare of domestic animals that need to find a new home – the establishment of this taskforce is an important part of this process,” Ms Thomas said.

Nikki Steendam, president of Beagle Freedom Australia, has been lobbying the Victorian government for several years to make release for rehoming mandatory for research animals and welcomed the commitment to establish the taskforce.

“This won’t affect [the facilities’] research because we’re getting them at the end of whatever trial they’re doing with them,” Ms Steendam said.

“And the animals get to live, get to adapt to outside life and get a family. And the families are able to teach the animal all the things in the world they had never experienced before because they’re so institutionalised.”

Ms Steendam also hopes the government will enforce a retirement age of six for animals used in medical research.

“It takes a lot longer for these animals to adapt than your average pet – whatever happens to an animal in its first 14 to 16 weeks of life will imprint on them for life,” she said.

“If they’re not handled a lot or deprived of everything, that will stay with them. When they come out, they can be afraid of TVs and vacuum cleaners. Walking through a doorway can be scary because it’s a confined space … But they do come around, and we do rehabilitate them, and we’ve had so many success stories, I’ve lost count.”

“Killing animals at the end of medical research is not only cruel, but in most cases completely unnecessary,” Mr Meddick said.

“Rehoming animals used in medical research across Victoria … is a simple reform that will save literally thousands of lives.”

The taskforce will hand down its final report and recommendations to the government by the end of this year.

Ms Thomas also announced a $50,000 boost to Lort Smith Animal Hospital through the ninth round of the Animal Welfare Fund.