The history of Australia's commemoration of both Anzac Day and Wednesday's Remembrance Day is storied. We all know what happened on both dates. On April 25, 1915, our mob hit the shores of Gallipoli and did extraordinarily well, and left eight months later, less the 9000 Australian soldiers that lie there still. On November 11,1918, the guns at last fell silent after more than four years of warfare which left 60,000 Australians dead.

In Sydney the commemoration of Anzac Day was slow to get going. One year on from the landing, for most of the day, one actual veteran did his best to attract interest. 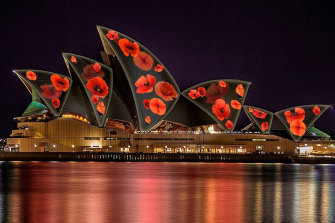 “Australia was there!” he cried, waving around a stumpy sleeve. “Look at me. I have lost an arm and can fight no more, but I tell you what, boys – if I had my arm back I’d be over there again. Now I want someone to take my place – who will volunteer?”

No-one took up his offer to talk about enlisting, let alone bowed before his sacrifice, or clapped him on the back and said “thank you, mate.”

One reason was most of those Australians who truly knew what Gallipoli had represented – the actual veterans – were still on active service overseas. In Egypt, church parades were held “to commemorate the landing and the lads who fell on the peninsula”. At Tel-el-Kebir, at the instigation of General John Monash, those Diggers who had hit the beaches on the first day had a red ribbon hanging from above the left breast pocket.

The grandest commemoration, though, was in London, where a memorial service was held in Westminster Abbey attended by 3000 people including King George V, Queen Mary, General Lord Kitchener, and our PM, Billy Hughes, the “Little Digger”, together with some 2000 Australian and Kiwi soldiers, referred to as “Knights of Gallipoli”.

For all of them there was a strong sense that the worst of the war was over, that nothing would be as bad as Gallipoli. Of course the horrors of the Western Front in France would soon leave another 47,000 Australian soldiers dead.

When the war was over, nevertheless, the battle that had gripped the Australian’s public’s imagination was the first one, Gallipoli. Over ensuing decades it was Anzac Day that became the key day of remembering. Even after Australian troops did brilliantly in World War II – being the first troops to stop both the German Army, as they did at Tobruk, and the Japanese Army, as they did in New Guinea’s Milne Bay and on the Kokoda Track – much of the focus remained on Gallipoli alone. Nothing that happened in the Korean War or Vietnam War changed that and the Boer War was by now all but forgotten. Yes, November 11 was marked on important anniversaries – the 25th, 50th 75th and so forth – but even Remembrance Day could make no real headway against the legend of Gallipoli. 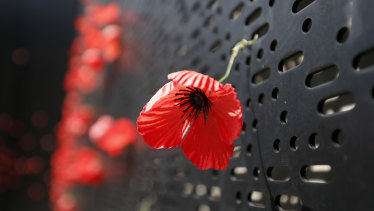 The poppy wall at the Shrine of Remembrance in Melbourne last year.Credit:Getty

Still, by the early 1990s even Anzac Day seemed to be running out of steam as only a handful of the veterans were left. The prime minister of the time, Paul Keating, attempted to shift the dial. After kissing the ground at Kokoda he famously noted: “The Australians who served here in Papua New Guinea fought and died not in defence of the old world, but the new world. Their world. They died in defence of Australia, and the civilisation and values which had grown up there. That is why it might be said that, for Australians, the battles in Papua New Guinea were the most important ever fought.”

Later, in 2013, at a ceremony to mark the 20th anniversary of the establishment of the Tomb of the Unknown Soldier, Keating said: “The First World War was a war devoid of any virtue. It arose from the quagmire of European tribalism. A complex interplay of nation-state destinies overlaid by notions of cultural superiority peppered with racism.”

At the time, it seemed a veritable laying to rest – in peace – of the mighty veterans of World War I. But now, in 2020?

Here is the odd thing. Not only is Anzac Day bigger than ever – in my street, my family and many of our neighbours were among many around the country standing out the front of our house at dawn, holding a candle – but so too, somehow, is Remembrance Day. The latter has crept up in the past few years, particularly over the centenary years of the great battles of WWI, with more and more commemorative activities, that are somehow still with us. Today, at the eleventh hour, of the eleventh day, of the eleventh month . . . 102 years on, Prime Minister Scott Morrison will be speaking at the Australian War Memorial in a ceremony attended by most of the leading members of both the political and military ranks. In my view, the gentle, sombre tone of that ceremony is closer to what our day of remembrance for military sacrifice should be about than the oft hairy-chested breast-beating that so often marks Anzac Day.

But it somehow feels that, despite many noble military milestones, our culture of remembrance is a little discombobulated, disproportionately focused on World War 1. Yes, let us remember all fallen Australian men and women, and honour those who served. But doing it across a day and a half, and mostly focused on World War I feels out of kilter.

Peter FitzSimons is a senior writer.