An anti-lockdown protester accused of lighting a phone tower on fire because it carried 5G allegedly told police he dug a large hole in his backyard to imprison Premier Daniel Andrews.

Police accuse carpenter Nathan Glover, 44, of deliberately setting a Mount Eliza Telstra phone tower on fire that was about 1.5 kilometres from his home, about 2.20am last Thursday. 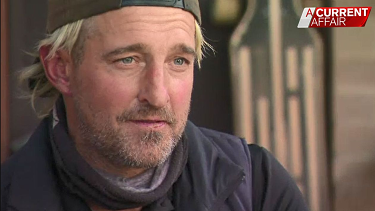 Nathan Glover has been charged after setting fire to a 5G phone tower.Credit:A Current Affair

The fire destroyed the tower and the damage is estimated to have cost more than $1 million. 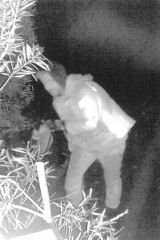 A CCTV capture tendered to the court.

User “Nate Gluv”, who the police allege is Mr Glover, wrote: “I’m down for special ops only if I get to burn something down.”

The chat group’s administrator responded: “Those 5G towers would make a nice fire”, to which Mr Glover allegedly replied, “my thinking exactly, I’ve made preparations already”.

Police allege Mr Glover gained entry to the tower by cutting cyclone fencing before climbing inside and pouring a mixture of red paint and petrol onto cabling at the phone tower site.

He then allegedly discarded a bottle containing the flammable liquid into some bushes, lit the fire and ran.

The prosecutor told the court that Mr Glover was captured on CCTV arriving at the tower on the Nepean Highway and leaving 10 minutes later on an electric scooter.

Investigators from the security investigation unit at the Counter Terrorism Command arrested Mr Glover at his home on Thursday morning. 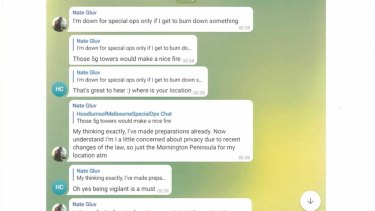 Photos of a Telegram chat tendered to the court

There they found a six by one-and-a-half metre hole in his backyard. Police allege Mr Glover told them he had dug the hole to imprison Premier Daniel Andrews.

Mr Glover is on bail on charges of using a telecommunication device to harass and menace after allegedly posting on Facebook, under the profile name “nathan.glover.756”, that he was intending to capture and arrest Mr Andrews and put him before a “kangaroo court” on October 26 last year. 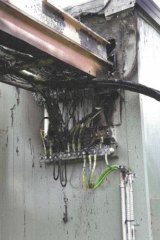 Damaged cables at the phone tower.

He allegedly added that he had the premier’s address, but he couldn’t capture him as his house was heavily guarded. He asked his followers to alert him to Mr Andrew’s whereabouts and movements.

A search of his home allegedly turned up items including an electric scooter and clothing matching the description shown in CCTV footage, wire cutters, a tube of red paint, petrol, two samurai swords, cannabis and hallucinogen psilocybin.

Mr Glover has been charged with criminal damage by fire, possessing a prohibited weapon, possessing cannabis, possessing a drug of dependence and committing an indictable offence while on bail.

Appearing via video link from Melbourne West Police Station and representing himself, he applied for bail, but was refused. He denies committing arson.

The Mount Eliza phone tower was set alight on October 7, causing more than $1 million worth of damage.

Mr Glover, dressed in an orange hi-vis singlet and beige work pants, with a sleeve of tattoos on his left arm, said he needed bail so he could work to support his partner and 10-year-old daughter.

“I’m not a danger to the public at all. Actually, [I’m] very for the public,” he told the court.

Mr Glover told Magistrate Simon Zebrowski that he was an entertainer and that his comments mentioned by police were meant to be a “tongue-in-cheek joke”. It is not clear which comments he was referring to.

“You might rethink your sense of humour after tonight,” Mr Zebrowski replied.

“Any emergency services calls made by the public may have been unable to be connected to relevant authorities,” she said.

Mr Glover will next appear in court on January 13.