Amboseli National Park: Kenya's elephant numbers have more than doubled between 1989 and 2018, thanks to increased anti-poaching efforts.

"In the last couple of years, we have managed to tame poaching in this country," he told reporters during a visit to the Amboseli National Park. 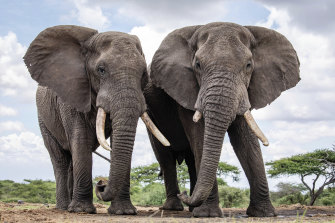 Two bull elephants at Ol Donyo lodge in the foothills of the Chyulu Hills, in the east of the Amboseli ecosystem, Kenya. Credit:Tusk/AP

While at the park, Balala participated in attaching a tracking collar to a bull elephant and naming of a pair of twin calves.

Poaching had surged in past years in Kenya and other sub-Saharan African countries, where gangs killed elephants and rhinos to feed Asian demand for ivory and horns for use in folk medicines.

In 2016, President Uhuru Kenyatta set fire to thousands of elephant tusks and rhino horns, destroying a stockpile that would have been worth a fortune to smugglers and sending a message that trade in the animal parts must be stopped.

The government has put in place stiffer penalties — longer jail terms and bigger fines — on anyone convicted of poaching or trafficking in wildlife trophies, saying poaching was harming tourism, a major foreign exchange earner.

Balala said due to the COVID-19 pandemic, the number of foreign tourists visiting Kenya was expected to drop by 80 to 90 per cent in 2020 and 2021.