‘Politics is a brutal game’: Arlene Foster ‘could quit the DUP completely’ when she stands down as leader as she reveals NONE of the party’s politicians who moved to oust her have contacted her to explain why

Arlene Foster today revealed that none of the DUP politicians who moved to oust her as leader have contacted her to explain why after she announced her decision to quit.

Mrs Foster said that ‘politics is a very brutal game’ and she had not ‘actually spoken to any of the colleagues who are purported to have signed’ a letter of no confidence in her leadership.

She is due to step down as DUP leader on May 28 and will then quit as First Minister of Northern Ireland at the end of June.

Her comments came amid reports that she intends to walk away from the DUP completely when she leaves her roles.

BBC News NI reported that sources close to Mrs Foster said she no longer believes the party is the same one that she joined. 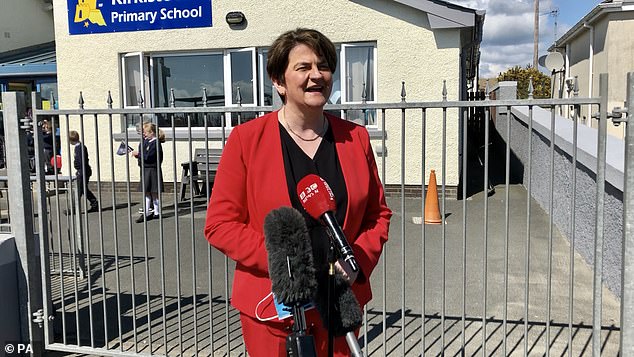 Mrs Foster said she is ‘at peace’ with her decision to quit as leader after an internal party backlash against her handling of Brexit.

Speaking during a visit to a primary school on the Ards peninsula this morning, she said she will wait until she steps down as First Minister before outlining her intention on whether she will leave the DUP altogether.

‘It’s been a turbulent week, it’s been a week where I’ve had to make pretty big decisions,’ she said.

‘But I think the time is right to move on and to do something different, and that’s what I’ll do.’

She added: ‘I still haven’t seen the letter that was talked about, so I presume I will see that at some stage.’

While she had been under mounting pressure from disgruntled DUP supporters for months, the pace at which her grip on power slipped this week has surprised many.

Her resignation on Wednesday came a day after party colleagues unhappy with her leadership moved against her, with a majority of senior elected representatives signing a letter of no confidence.

Discontent at the DUP’s Brexit strategy was a major factor, with party rank-and-file laying some of the blame for the emergence of an Irish Sea border at her door.

On a visit to Kirkistown Primary School in Co Down, Mrs Foster said: ‘Politics is a very brutal game – I think everybody knows that to be the case.

‘I haven’t actually spoken to any of the colleagues who are purported to have signed the letters, they haven’t been in touch. So, you know, that’s a matter for them.

‘I’ll move on and look forward, and I’m looking forward to the next chapter as to what I’m going to do with my life.’

The First Minister said she hopes the DUP will continue to ‘look forward’.

‘So the time is right to move on, to do something different and do something new, and I’m very much looking forward to that challenge.’

Mrs Foster said ‘not everybody signed the letter’ and ‘some very good friends did not’.

She added: ‘I haven’t really had any engagement from any of the colleagues who felt that I should leave, so I suppose that’s the disappointment – that I don’t actually know what the reason is for it, but, as I say, you know, that’s politics.

Mrs Foster confirmed she will be stepping down as an Assembly member for Fermanagh and South Tyrone.

Asked whether she would like to join the House of Lords, she said such decisions are not made by her.

She said she wishes whoever leads the party well, but would not be drawn on who she would be supporting in any leadership contest.

Edwin Poots, Stormont’s Agriculture Minister, is currently the only DUP politician to have formally announced their candidacy for the leadership.