London: A British court adjourned hearing a US extradition request for imprisoned WikiLeaks founder Julian Assange on Thursday after four days that focused on whether or not his alleged crimes were political. 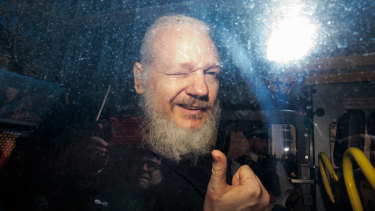 Julian Assange arrives at a British court in April.Credit:Getty Images

Woolwich Crown Court adjourned the hearing, which is expected to last several months, until a three-week session set to begin May 18. Two short procedural hearings are scheduled in late March and early April.

Assange's lawyers argued that his extradition should be blocked under British law because Washington has pursued it with "political motives." Lawyers for the US government said he had broken "ordinary criminal laws."

The US Justice Department said it charged Australian citizen Assange, 48, with conspiring with former US military intelligence analyst Chelsea Manning to leak a trove of classified material in 2010.

Much of Wednesday and Thursday was spent in legal arguments over a requirement for Assange to sit in court away from his lawyers, behind protective screens that his supporters called a "glass cage."

"What we heard this week also confirmed our position, which is that we do believe he's been targeted for his contributions to public interest reporting," Rebecca Vincent of Paris-based Reporters sans Frontieres said following Thursday's adjournment.

"The United States has no evidence that he created a serious and imminent risk for anyone, and the UK should not extradite him to be held on those charges," Vincent said in a video statement.

The Defend WikiLeaks campaign, which organised protests outside the court and in international cities this week, said "journalism itself is on trial" in the hearing.