We’ve read and heard a lot this past week about the number of foreign fighters travelling to eastern Europe to help Ukraine fight the Russians.

Today, Ukraine said 16,000 foreigners had signed up to fight. 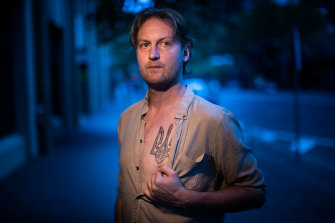 Nick Janiw, who has the Ukrainian coat of arms tattooed on his chest, plans to help with food and medical supply distribution in the war zone.Credit:Jason South

But it’s not just fighters who are rushing to Ukraine. The country’s Ministry for Health has just said that more than 500 medics have also applied to help treat the wounded.

The government said that volunteers had applied from across the world, including the European Union, the United Kingdom, Switzerland, Turkey, Azerbaijan, Israel, the United States, Canada, Australia, New Zealand, South Africa, India, Jordan and Brazil.

Earlier this week, our reporters spoke to Nick Janiw, who is heading to Ukraine from Melbourne to help distribute food and medical supplies.

You can read more about his story here: They were told to stay home, but these Ukrainian Australians are going to war

Ukraine’s intelligence warns Russia could shell its own territory

The Ukrainian Security Service has just issued a warning that Russians could start shelling their own territory.

“In [the] Russian village, Popovka near [the] Krasnopillia district on the Ukrainian border, Russian Grad multiple rocket launchers were turned towards Russian territory,” the message, shared by government officials on Telegram, said.

“Ukrainian Security Service expects that occupants want to organise a provocation and shell their own territory to accuse Ukraine of attack on Russian civilians.”

The Security Service said the message should be widely distributed to avoid such a provocation.

Hello and welcome to our rolling coverage of the war in Ukraine.

I’m Latika Bourke in London and I’ll be keeping you updated with all the developments overnight.

It’s been another day of suffering and setbacks in Ukraine with the Russians taking control of the strategically important port city of Kherson and bombarding other cities with missiles.

Read more: ‘They are not warriors’: Zelensky defiant as cities battered by Russians

You can recap how the last 24 hours unfolded here: Australia news LIVE: Russian advance stalls outside Ukraine capital as nation’s death toll rises; Sydney dodges wild weather as BOM warns to ‘hunker down’ for the weekend