Shocking video has emerged of the moment a man attacked two police officers in the street in Sydney’s west.

The footage appeared on the Humans of Bankstown Facebook page and shows a man kneeing and punching the two female officers.

The incident occurred near the Hoyts Cinema on Jacobs Street, Bankstown just before midday on Monday, when two senior constables on patrol in the area saw a man standing in the middle of the road. 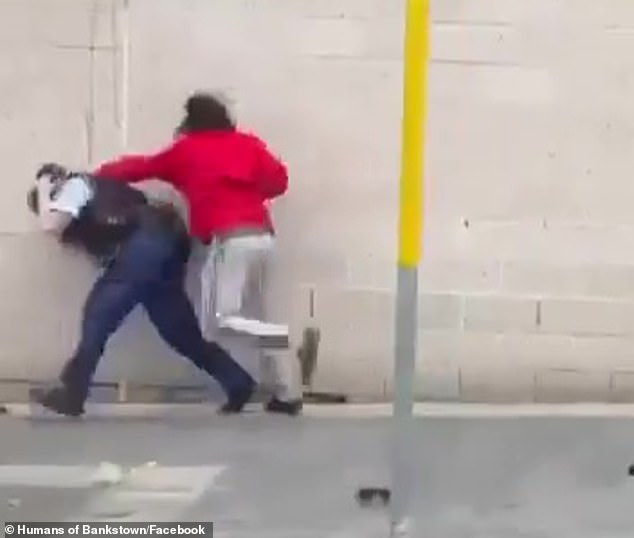 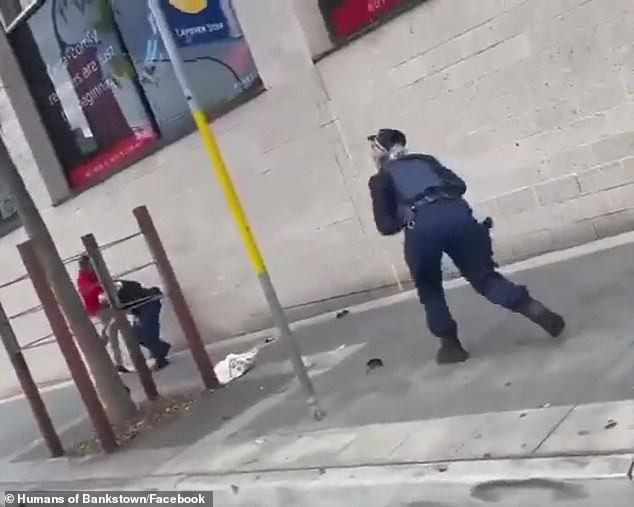 Police were attempting to move on the man, who had been standing in the middle of Jacob Street Terrace, Bankstown just before midday on Monday

The officers approached the man to move on from the middle of the street when he suddenly attacked them.

‘The man allegedly punched and kicked both officers, who used OC spray in an attempt to subdue him, before he ran from the area and boarded a train,’ NSW Police said in a statement.

Filmed from a parked car, the man in a red hoodie can be seen violently kneeing a female police office in the head while a fellow female officer goes to her aid.

The second officer then gets on her police radio to call for help.

The man is then seen running away in the distance as the policewoman who was attacked hunches over feeling her face.

This afternoon police arrested a 43-year-old man at Yagoona and took him to Bankstown Police Station.

He then allegedly assaulted a third officer, a 32-year-old male senior constable, while in custody.

The male officer – and the two female officers from the Bankstown Police Transport Command, aged 30 and 32 – all attended Bankstown Hospital for treatment.

‘Charges are expected to be laid and inquiries into the incident are continuing,’ NSW Police said.

New South Wales Premier Gladys Berejiklian has now all-but abandoned the strategy, and is instead linking the end of lockdown restrictions with the number of fully vaccinated people rather than the number of cases.

She has promised the state’s 8million residents that measures will begin easing when 70 per cent of people are fully vaccinated, a target that is expected to be hit in the middle of next month.

Around 46 per cent of eligible adults have so-far been fully jabbed.

But, Ms Berejiklian has warned, those who are not fully protected should not expect to be granted the same freedoms as those who are.

‘For those of you who choose not to be vaccinated, that is your choice, but don’t expect to do everything that vaccinated people do,’ she said.

‘Our vaccination rates keep increasing, however there has been a slight slowdown. So we encourage everybody to come forward and get vaccinated.’

Some curbs were eased for fully vaccinated residents in Sydney from Monday. Five people will be allowed to meet outside while members from the same family in Sydney’s 12 hardest-hit suburbs can gather outside for two hours.

Australia is scrambling to control outbreaks of the highly infectious Delta variant of the novel coronavirus that began in Sydney in June and spread to Melbourne and Canberra, plunging nearly half the population of 25 million into lockdown.

Other state capitals, however, have few or zero cases.

The steady rise in infections has turned up the heat on the federal government to procure emergency vaccine supplies.

An additional 1 million doses of Moderna was bought from the European Union on Sunday while vaccine swap deals with Britain and Singapore were executed over the last two weeks.

Lieutenant General John Frewen, head of the federal government’s vaccination taskforce, said there would be enough vaccines from the middle of October to fully inoculate every eligible person.

The COVID-19 vaccination drive was expanded on Monday to include around one million children aged 12-15.

Australian biotech company CSL, which locally produces the AstraZeneca COVID-19 vaccine, said a positive case was detected at its Melbourne facility but production would not be interrupted.

Australia’s total cases stand at around 75,300, including 1,098 deaths, although the mortality rate in the latest outbreak is lower than last year.

A total of 1,257 new cases were registered in New South Wales on Monday, while neighbouring Victoria reported 473 new infections, its biggest one-day rise for 2021.