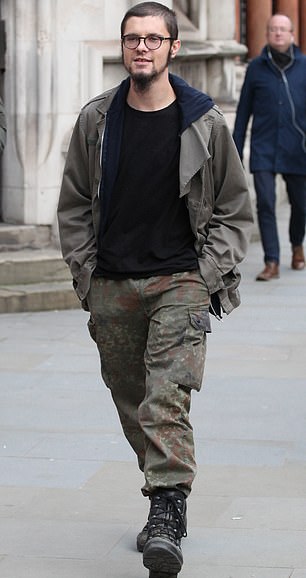 An autistic man who claims he was assaulted and branded a ‘t**t’ by police during a Guy Fawkes Night protest outside Parliament is suing the Met.

Jed Miller was among the hundreds of activists who attended the Anonymous group’s ‘Million Mask March’ in November 2012.

The 26-year-old was accused of inciting the Parliament Square crowd and pushing a police officer, but the Crown Prosecution Service dropped the case within five months.

Mr Miller – who has Asperger’s, fibromyalgia and chronic fatigue syndrome – says his arrest, detention and prosecution was a strain on his health.

And he is now suing Metropolitan Police Commissioner, Cressida Dick, on behalf of the force, at Central London County Court.

He claims he was assaulted, falsely imprisoned and maliciously prosecuted.

Giving evidence before Judge Alan Saggerson and a jury, Mr Miller said the allegation he assaulted police was ‘news to me’.

He said that he was toward the back of a group when pushing against the police line began and the officers began pushing back.

Mr Miller described himself as stuck in the noisy crowd, being pushed and shoved in all directions by protesters and the police officers.

‘The police were just pushing people indiscriminately,’ the self-described anarchist told the jury.

‘At one point, a woman who I didn’t know had fallen over behind me and I was pushed over the top of her.’

He said the situation had calmed and he was getting ready to go home to bed when he was arrested.

‘I was saying “goodbye” to my friends and, the next thing I knew, six police officers burst through the police line, grabbed me and said I was under arrest,’ he said.

‘They grabbed me, dragged me through the police line and told me I was being arrested for assault. The PC called me a “t**t”.

‘When I challenged him, he said: “There’s six of us and one of you. What are you going to do about it?”.’

Mr Miller says he was grabbed and restrained by the arms before being put in handcuffs.

He was taken to Charing Cross Police Station, where he was held for 15 hours and charged with assault the following afternoon. 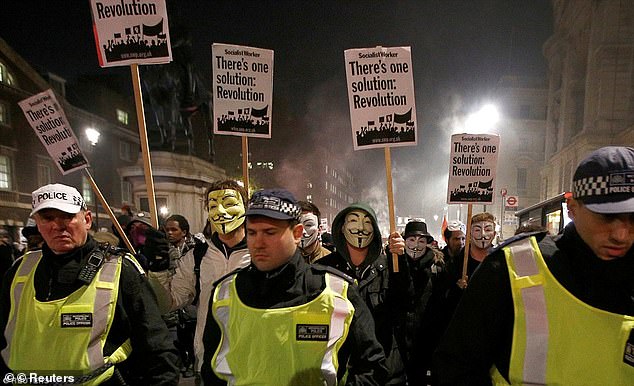 The activist denied assaulting police or inciting the crowd to push against officers at the Anonymous demonstration last year (pictured, Parliament Square during the protest)

Mr Miller was unable to get his medication and, because of the stress and his medical conditions, he was left feeling ‘very very anxious’, he said.

Five months later, the prosecution was dropped after the CPS decided it was ‘not necessary in the public interest’.

In the meantime, he suffered sleepless nights and had to increase his fibromyalgia medication because stress makes it worse, he said.

The force denies that the arrest was unlawful, that Mr Miller was assaulted or that the prosecution was malicious.

He had twice assaulted a police officer by pushing him, and had incited the crowd by yelling ‘charge’, Met lawyers claim.

Mr Miller said he attended the protest, organised by Anonymous, because it was ‘a more interesting way of spending a Monday night’.

And he told the jury that the form of anarchism he ascribes to does not involve a complete rejection of the rule of law. The hearing continues.

After setting up a ‘safe space’ for the homeless, the squatters were attacked by a gang of masked men who hurled missiles and abuse in January 2017.

They were reportedly taking part in a peaceful poetry workshop when about a dozen thugs attacked the Belgravia mansion. After a Central London County Court battle they were evicted from the property.