Office workers spend more than £1,700-a-year on average on extras such as sponsoring colleagues and buying coffee, study finds

Officer workers spend more than £1,700-a-year on unnecessary extras such as sponsoring colleagues and buying coffee, a new study revealed.

Socialising and going on ‘voluntary’ nights out made up the biggest cost to the average office employee, the new figures showed.

On average the cost of working in an office came to around £7-a-day, the study by Censuswide for the building society Nationwide found.

Around £292-a-year was spent on nights out with fellow workers, as well as £154 spent by the average office employee on clothes and bags for work. 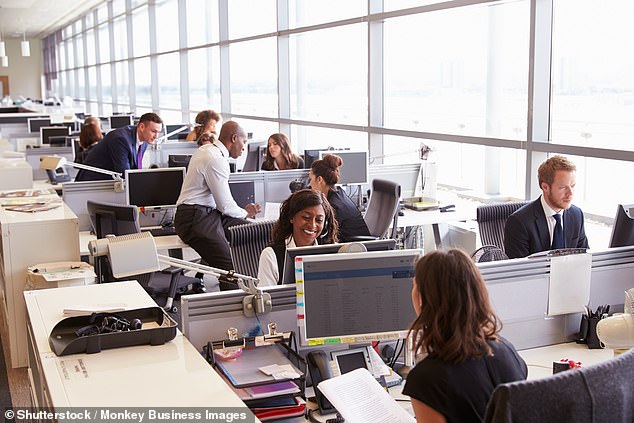 A study by Censuswide found officer workers spend more than £1,700-a-year on unnecessary extras such as sponsoring colleagues and going on ‘voluntary’ nights out

A further £230 was spent on coffees, teas and ‘treats’, while almost £400 was splashed out on cards and gifts for retirees as well as birthdays for colleagues.

The poll of over 2,000 office workers found many spent their earnings on colleagues getting married, climbing Kilimanjaro or running half-marathons, according to the Times.

One-in-five of those who took part said they were unhappy about pressure put on them to buy teas and coffees for their colleagues.

While one-in-six said they resented requests for donations to charity runs and sponsorship events.

A quarter of those polled complained about having to take part in ‘secret Santa’ and a fifth did not like having to go for Christmas lunch and drinks with colleagues.

However, around 80 per cent of office workers said they actively went for drinks with their colleagues and 11 peer cent did so at least four times a week, the study said.