Singapore: Bali bomb maker Umar Patek has been released from jail in Indonesia having served less than 12 years of a 20-year sentence.

The 55-year-walked free on Wednesday morning from Porong prison in Sidoarjo, south of the East Java capital of Surabaya, after being granted parole. 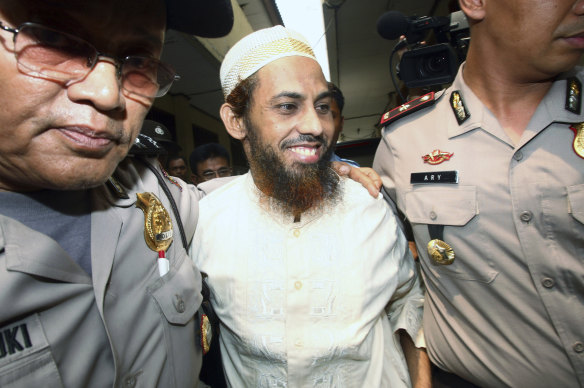 Umar Patek is escorted to court in Jakarta in 2011.Credit:AP

Rika Aprianti, the spokeswoman for Indonesia’s Directorate-General of Corrections, confirmed his release to The Sydney Morning Herald and The Age on Wednesday night.

It was approved by Indonesia’s counter-terrorism agency BNPT, Indonesia Minister of Law and Human Rights Yasonna Laoly and Detachment 88, the country’s anti-terror police squad, and was the subject of controversy in the lead-up to the 20th anniversary of the Bali bombings in October.

Prime Minister Anthony Albanese had objected to the trimming of Patek’s sentence, describing the former Jemaah Islamiyah militant as “abhorrent”, and news of his imminent release had upset family members and friends of victims of the attack, as well as survivors.

His release was delayed until after the anniversary, but Indonesian authorities gave the green light to him to getting out, satisfied that he had reformed from his extremist past and sworn allegiance to the state. 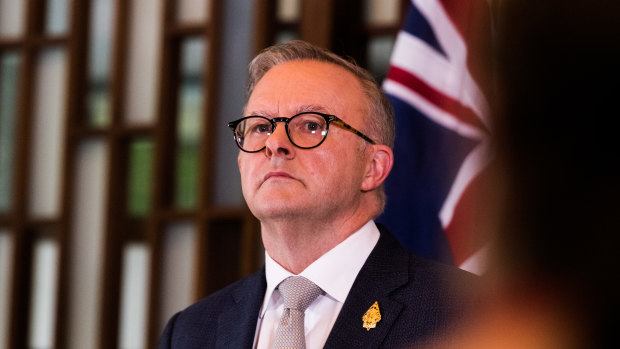 Yasonna, the Indonesian minister, said in August that foreign governments could offer their suggestions, but Jakarta considered objections only “from our own institutions”.

Patek, who once had a $US1 million ($1.44 million) reward on his head in a years-long manhunt, admitted at his trial in 2012 that he had mixed the chemicals used in the explosives that tore apart the Sari Club and Paddy’s bar in Bali in 2002, killing 202 people including 88 Australians.

He played down his role in the attack – even claiming he had urged its plotters not to go ahead with it – and avoided the death sentence handed down to Bali bombers Amrozi, Imam Samudra and Ali Ghufron, who were executed by firing squad in 2008.

But he was jailed for 20 years after being found guilty of charges including premeditated mass murder in a Jakarta court over the Bali bombings as well as for a series of blasts at churches in Jakarta on Christmas Eve 2000 that left 19 people dead.

He had been apprehended after nine years on the run in Abbottabad, four months before al-Qaeda leader Osama bin Laden was found by US Navy SEALS hiding in a compound in the Pakistani city and shot dead.

Patek, who was known as Demolition Man, such was his reputation for assembling bombs, had a total of 33 months shaved off his jail term during his time inside.

The latest reduction of five months, attributed to good behaviour, was announced on Independence Day in Indonesia on August 17 and made him eligible for parole immediately.

Patek’s wife Ruqayyah Binti Husein Luceno, who hails from the Philippines and was granted Indonesian citizenship in 2019, had been living near the prison.

It was considered likely they would live initially in Lamongan, East Java, where his friend and former Jemaah Islamiyah member Ali Fauzi runs a foundation aimed at deradicalising terrorists and has a boarding house.

Fauzi has said Patek would use his freedom to convince others not to turn to extremism.

“My big hope with the release of Umar Patek [is] many people out there will be saved from terrorist seduction,” he said.