Economy to bounce back stronger than expected: Bank of England is set to hike its growth forecast as the vaccine rollout and easing of lockdown helps boost recovery

Britain’s hugely successful vaccination rollout is helping the economy recover from the coronavirus recession faster than expected, the Bank of England will declare this week.

The Bank is set to hike its forecasts for the UK economy on Thursday as the vaccination programme and easing of lockdown help boost Britain’s recovery.

It predicted unemployment would peak at 7.8 per cent after the furlough ends, but the scheme was subsequently extended at the Budget in March.

Howard Archer, chief economic adviser to the EY Item Club, said: ‘It looks highly likely that the Bank of England will revise significantly up its GDP growth forecast for the UK economy in 2021, although it may party offset this by lowering expected growth in 2022, and also markedly its unemployment projections.’

The EY Item Club believes growth could surge to 6.8 per cent in 2021, which would be the best year of growth since the Second World War.

It has also slashed it forecast for peak unemployment to 5.8 per cent. 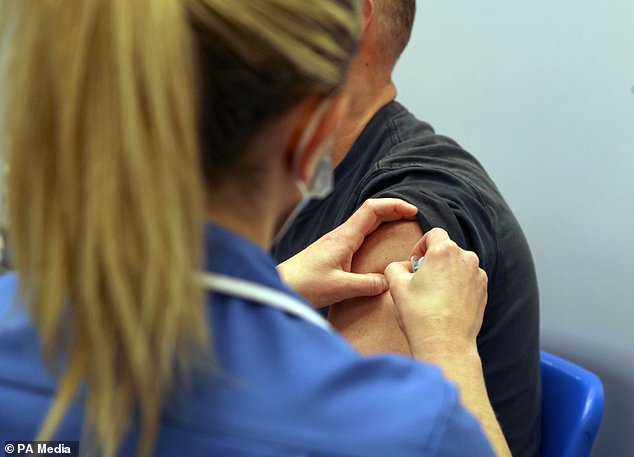 Policymakers at the Bank are expected to ‘significantly’ upgrade their growth outlook as they keep interest rates on hold at 0.1 per cent, according to experts.

While the latest lockdown is predicted to see gross domestic product (GDP) – a key measure of the economy – fall once more between January and March, it is thought the hit will be far less than first feared as the economy becomes increasingly resilient.

GDP rose 0.4 per cent in February, after a 2.2 per cent fall in January, even though England was still in full lockdown.

Economists also believe the economy has already got off to a strong start in the second quarter as non-essential shops and outdoor dining reopened on April 12.

Whereas all eyes were on the possibility of negative interest rates last year, attentions have now turned to when the Bank’s Monetary Policy Committee (MPC) may look to lift them amid concerns over rising inflation.

Some experts have said the Bank may even look to signal plans to scale back its mammoth £895 billion quantitative easing (QE) programme at the May meeting.

Recent official figures showed the UK’s rate of unemployment unexpectedly fell to 4.9 per cent between December and February, while companies are beginning to hire again as the economy opens up.

‘While it still looks likely that some jobs will be lost when the furlough scheme ends in September, it also looks like the peak in the unemployment rate will be less than the Bank of England previously feared,’ Mr Archer said.

Inflation nearly doubled to 0.7 per cent in March from 0.4 per cent in February, but Mr Archer is not expecting rates or QE to change in 2021 and said inflation would need to be sustained at the 2 per cent target before it considers tightening monetary policy.

‘There is a growing possibility that the Bank of England could tighten monetary policy in 2022, although at the moment, early-2023 is more likely,’ he said.