Initiatives by teachers in Douma, in Eastern Ghouta, aim to continue educating schoolchildren despite bombardment. 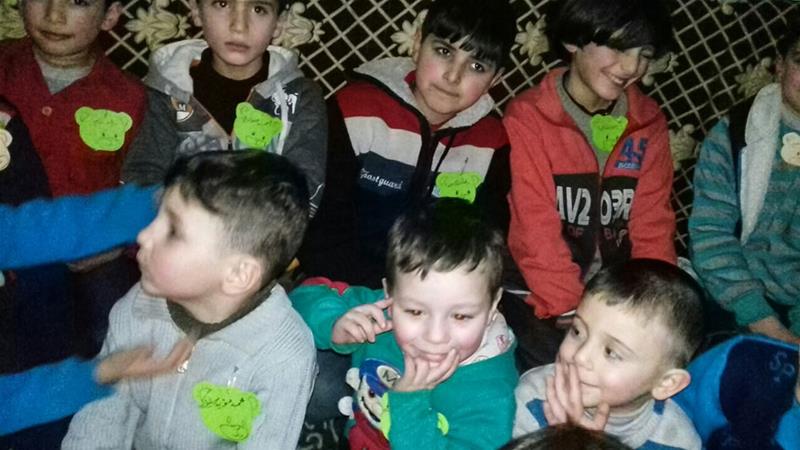 Alaa al-Khamooneh, a mathematics teacher in Douma, Eastern Ghouta’s largest city, was forced to take his profession underground in the last month to avoid bombs and aerial attacks.

Since the Syrian and Russian offensive on the largely agricultural region began on February 18, the 35 year old has been part of a teaching initiative that aims to provide a semblance of normality for schoolchildren.

Many residents have taken to living mostly in underground basements or makeshift shelters, in order to escape bombardment from warplanes, which to date have claimed at least 1,644 civilian lives.

“Teachers have been trying to continue with the education process first and foremost to distract the children from the reality around them,” Khamoomeh told Al Jazeera.

“It was a way to change what their day-to-day lives have become, from counting explosions to constant crying in fear.”

Many of the students suffer from nightmares and panic attacks, symptoms of post-traumatic stress disorder which will have a detrimental effect on their lives if left untreated, Khamooneh explained.

“We are trying to tackle this problem with what little resources we have, such as psycho-social sessions and – whenever we have the opportunity – painting,” he said.

Basement schools are a project that was organised last month by teachers in Douma, as it became too risky to carry on lessons in school buildings.

This has been the case since 2014, where schools have been targeted by Syrian government forces, said Adnan Alwan, a teacher of the social teaching project.

Out of Douma’s 31 schools, six were totally destroyed during Syria’s eight-year conflict, and a further 15 sustained partial damage, Adnan said.

“Before this offensive, we used backrooms in random buildings to avoid casualties in case these buildings were also targeted,” the 32 year old told Al Jazeera.

The project runs approximately 48 basement schools in Douma, with an attendance of 3,500 students, and receives most of its support and meagre supplies from their parents. In total, 96 teachers are part of the initiative, or two teachers to each basement school.

“This is all completely volunteer work by Douma’s teachers to help and support the children,” Alwan said.

“We had to take the initiative to help the children cope with their new lives underground.” 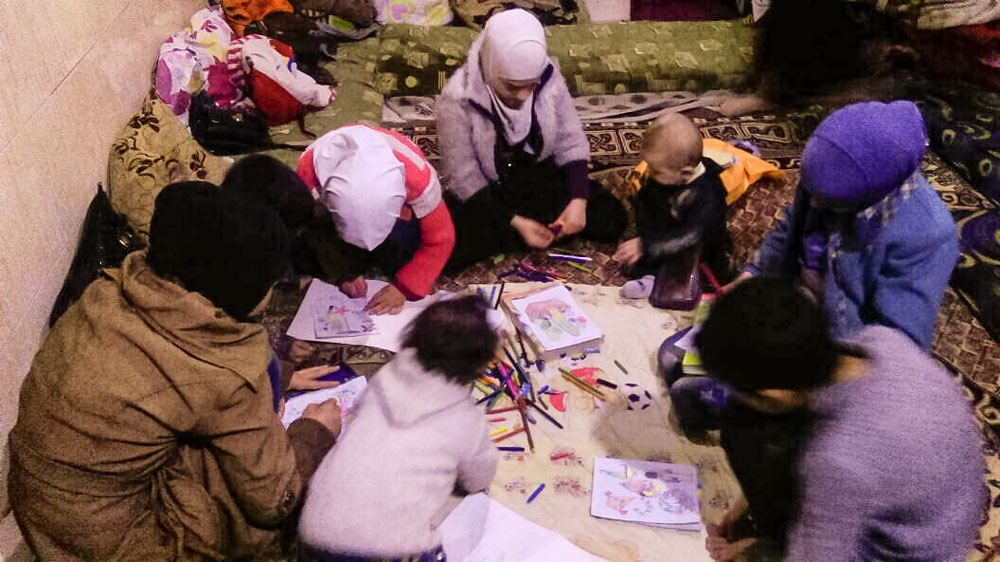 Yet the conditions of these basement schools are far from ideal or safe – Alwan describes them as resembling a prison.

“We teach in small foul-smelling spaces in basements that more often than not have lots of rubble,” he said. These spaces lack desks and tables, and instead children sit on blankets or threadbare carpets.

While whiteboards are available, electricity is provided in the form of LED battery-operated lights.

The curriculum taught is the revised version by the Turkey-based Syrian opposition government, which removed most content that Syria’s Baathist government had included.

One example that the revised cirriculum removed is the subject of nationalism, which teaches the achievements of Hafez al-Assad and his son and current President Bashar.

Yet despite the basement schools’ best efforts to continue with the education of students, Khamooneh said residents still fear the targeting of shelters and basements by warplanes.

“It is not safe being here,” he said, referring to the attack on a basement school in Irbin that killed at least 16 children and four women last week.

Living in the dark

Sarah Hajkarem, 11, lives with her parents and two younger brothers in one of the underground shelters.

“We have been here in the dark for more than a month,” she said. “I miss the sun and playing in the streets after school.”

The shelter also doubles as a basement school, but Sarah said she had difficulty focusing during the sessions because “the bombs didn’t stop falling”.

“We gather in a circle like a prayer ring in a mosque under weak lights,” she said. “We can barely see what the teacher is writing, and we can’t write as there aren’t enough pens and notebooks for everyone.”

The basement is full of Sarah’s neighbours, who all have only have one meal a day. There is not much space to move around, and children play in silence to not disturb the adults.

Sarah, who wants to study English literature and become a teacher, wishes life would go back to normal.

“I want to be able to go to a proper school again, play outside with my friends and have food, water and be able to shower every day,” she said. “My mother said we will have all that soon.”

Eastern Ghouta, which lies 15km east to the capital Damascus, has been under a government-imposed siege since mid-2013 after opposition factions took control.

Subsequently, it has been the target of repeated attacks by the government over the years.

The latest offensive has been carried out in tandem with a government ground invasion that sequestered the region into three parts.

In the past few days, the situation has quieted down after opposition factions signed Russian-brokered agreements with the Syrian government.

The deals allow for the evacuation of rebel fighters and any civilians who want to leave to the northwest province of Idlib, one of the last bastions under opposition control.

As many as 100,000 residents left Ghouta to either government or opposition controlled enclaves over the past week.

Meanwhile, the opposition group Jaish al-Islam that controls Douma, has been in negotiations with the government but to date no deal has been reached.

But the future remains uncertain for residents choosing to remain in Ghouta, who are on the cusp of facing a new reality under the control of the Syrian government.

The war has entered its eighth year and devastated the population, with more than 450,000 killed and an estimated 11 million displaced.

For Alaa, the basement schools are supposed to be a temporary fixture in the hopes that a brighter future will follow.

“We couldn’t imagine staying here giving lessons under such circumstances,” he said.

“We are doing our best for the next generation and we hope that they will have a better future.”