Leaked document says the group, which Spanish authorities view as ‘terrorist’, is internally voting on its future. 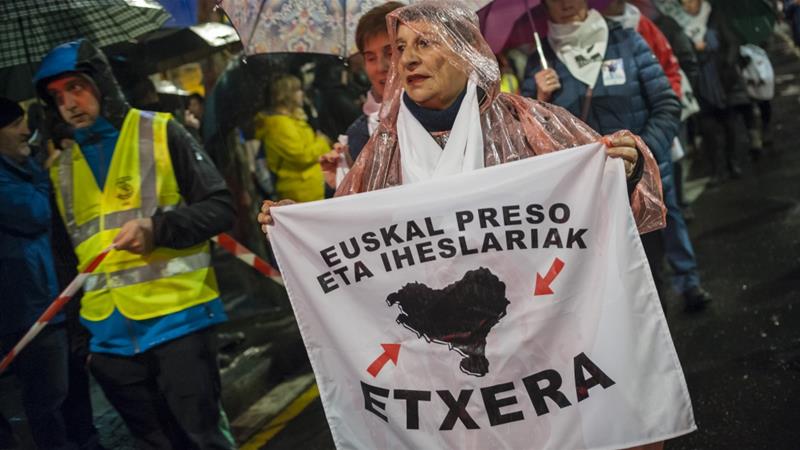 A document prepared by Basque separatist group ETA says their end is coming after months of discussion and internal votes, according to reports.

The group, which waged a campaign of bombings and armed attacks against the Spanish state over 60 years that killed at least 840 people, including 340 civilians, has been of finalising their end since they disarmed in April 2017.

“The end of [the group’s life cycle] becomes more evident” after their decision to give up arms, the document, released on Wednesday and seen by the Basque media outlet Gara, says.

The document, prepared in 2017, says that while the group is coming to an end, its fighters will continue to support the “political movement” of left-wing Basque nationalism that “has sufficiently demonstrated maturity and the ability to fight” for the independence of the Basque country.

A history of violence

ETA was formed in the 1950s. It grew in strength under the dictatorship of Francisco Franco who ruled Spain from 1939 to 1975.

Franco’s policies pushed for a unification of the Spanish state, outlawing minority languages and cultures.

The Basque are an indigenous people whose language is unrelated to any others. Research shows they are genetically distinct from other populations, too.

ETA, which attacked Spanish police and armed forces during its lifespan, played an important and violent role in Spain’s transition to democracy.

The ETA assassins dug a tunnel under a street that Carrero Blanco’s car travelled on to reach a church in Madrid.

The tunnel was filled with explosives and detonated as the admiral was on his way to Mass.

The explosion threw Carrero Blanco’s car over a five-storey building onto an adjacent plaza.

Franco then named exiled King Juan Carlos as his successor. The king supported a democratic transition after assuming control in 1975.

Some of ETA’s deadliest years came Franco’s death and Spain’s transition to democracy.

In 1987, the group bombed a supermarket car park in Barcelona, killing 21 people – mostly civilians – and injuring another 45.

The Barcelona attack, the deadliest in ETA’s history, was widely criticised.

Barcelona is the capital of Catalonia, another region in Spain with its own language and culture.

Catalonia is currently in a smouldering political crisis after the regional parliament declared independence from Spain in October.

Madrid called snap elections in December to reinstate “order” in Catalonia but pro-independence parties maintained their majority in the regional parliament.

There is a public effort to re-install Puigdemont as president of Catalonia, but the independence drive is “over”, according to alleged text messages sent by Puigdemont.

The messages were sent to former Catalan health minister Toni Comin and were caught on camera by a Belgian television programme on which Comin appeared.

They were aired by Spanish channel Telecinco in January.

While Catalonia’s current push for independence is hobbled, ETA plans to release before summer the outcome of their vote to cease armed operations and continue with the political process, Gara, the media outlet, said.