BBC News presenter Simon McCoy has announced he is leaving the corporation after nearly 18 years.

The 59-year-old confirmed the news on social media, after his floor manager wished him luck on his final day.

McCoy, who joined the BBC from Sky in 2004, is expected to present the News at One for the last time today.

The veteran journalist has made several infamous on-air gaffes, including picking up a ream of A4 paper instead of his iPad, and sarcastic commentary of royal events.

‘If you think he’s a handful on-screen, imagine what he’s like off it? Only got to floor manager 4 years of his 17+ at BBC News so was nice to do his final week,’ said Niall Jackson. 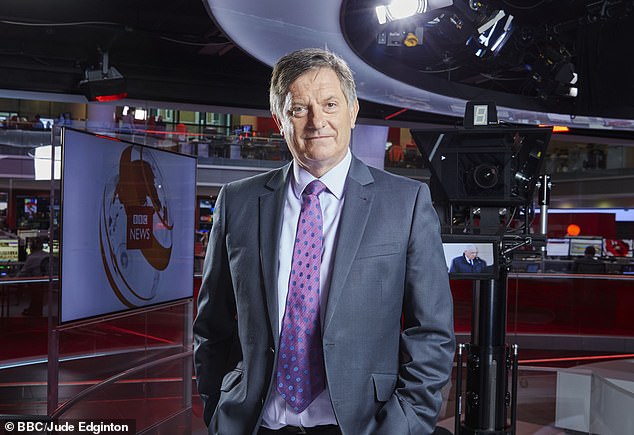 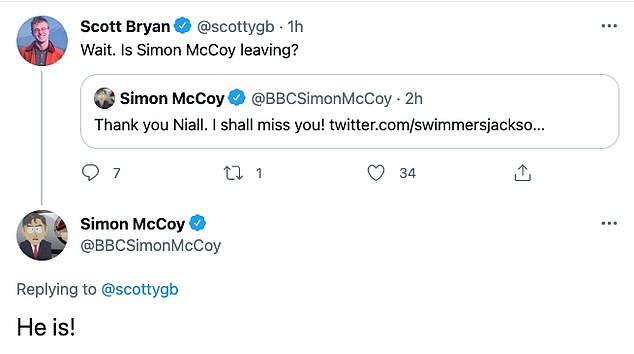 News of McCoy’s departure came only after his floor manager wished him luck on his last day, causing several people to question if he was definitely leaving the BBC

‘Made the dreariest of heavy news days instantly more manageable. May the road rise up to meet you Simon McCoy.’

McCoy replied: ‘Thank you Niall. I shall miss you!’ causing hundreds of people to ask if he was definitely leaving.

Sam Taylor, Head of Live & Breaking for BBC News said: ‘Sharp, funny and a great colleague – it has been a delight to have Simon at the helm of the BBC News Channel and BBC News at One.

‘We’ll miss his one-liners, pregnant pauses and commitment to breaking news in every form, and wish him the very best for the future.’

McCoy left Sky News in 2004 to take over the morning slot on BBC News with Kate Silverton the following year. 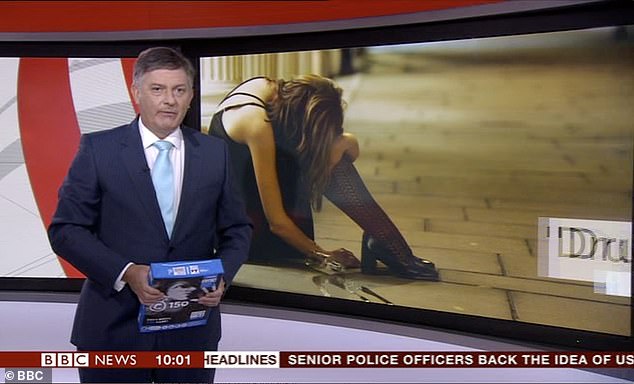 McCoy has been known for his on-air gaffes, including when picked up a ream of a A4 paper instead of his iPad by mistake. He carried on with straight face

Over the years, he made regular appearances on BBC Breakfast, and continued to be a stand-in and relief presenter on weekends following the arrival of Charlie Stayt.

McCoy took up the role of main presenter of the BBC News at One last March, and presents the weekday 2-5pm slot.

As well as his newsreading skills, McCoy has become known for some of BBC News’ best viral moments.

Footage of McCoy went viral when he accidentally picked up a refill pack of A4 printer paper instead of his iPad while live on air.

A spokesperson for the BBC said at the time: ‘This morning as Simon McCoy was preparing to introduce this story, instead of picking up his tablet to hold as he went to air, he mistakenly picked up a ream of paper that was sitting next to it.’ 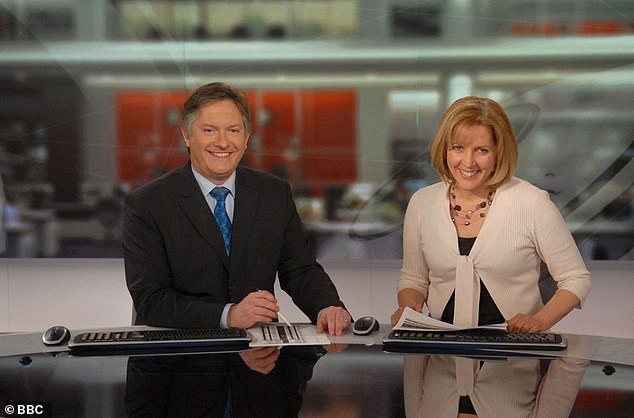 McCoy joined the BBC from Sky News in 2004, first presenting BBC Breakfast before eventually working on the News at One and Afternoon Live

Presenting on New Year’s Day, he told BBC viewers that there would be a ‘special programme’ with footage of all the best parts of 2020.

But when nothing showed up on the screen behind him, he turned to the camera and said: ‘Exactly. It’s farewell to 2020.’

Despite being a Royal Correspondent for Sky News during some of the Crown’s most turbulent years, McCoy’s recent coverage of royal events has been somewhat sarcastic.

He delighted viewers with his sardonic coverage outside the Lindo Wing at St Mary’s in the lead up to Prince George’s birth in 2013.

As reporters from around the world gathered outside the hospital awaiting news of the royal birth, Simon made no secret of the tedium of the task in hand.

‘Plenty more to come from here,’ he told viewers. ‘None of it news, of course, but that won’t stop us. The world’s media have gathered to report that there is no news. Let’s speculate, because that’s all we can do. Breaking news: we have no news…’

To fill in the gaps he read out tweets from viewers, including one who described the coverage as ‘sycophantic rubbish’ saying: ‘Not everybody is enjoying the specter of the speculation, the endless speculation.’

He added that another viewer had tweeted: ‘God help us if this ends up a long labour’.

Simon also had the nation in fits of laughter in October 2017 when he announced the Duchess of Cambridge was pregnant with Prince Louis.

He said: ‘Just er, got this, from Kensington Palace. Their Royal Highnesses the Duke and Duchess of Cambridge are delighted to confirm they are having a baby in April.

‘Bearing in mind they announced she was pregnant back in September, and it was thought she was around two or three months pregnant, I’m not sure how much news this really is.

‘So, April, Kate is having a baby. Clear your diaries, get the time booked off – because that’s what I’m doing.’

McCoy has not given any indication as to where he may next appear on screen.

It is not the first time Mr McCoy has made headlines with his candid approach to news presenting.

In August 2017 the journalist visibly struggled through a news report on a dog surfing competition.

His world-weary voice revealed his true sentiment as he sighs his way through the report, unable to summon any enthusiasm for the surfing dogs.

He even introduced the report with a qualifying comment: ‘Just bear in mind it is August’ – a month that has been dubbed ‘silly season’ by journalists due to the shortage of hard-hitting news.