Honesty is the best policy, especially when it comes to the local public library.

A former library goer with a guilty conscience recently mailed back a 1968 copy of Life magazine with the Beatles on the cover to the Parma, Ohio, branch of the Cuyahoga County Public Library, along with a $100 money order to cover late fees, the library wrote on Facebook.

The note that came with the decades-long overdue magazine read, “I stole this magazine from the Parma Ridge Road Library when I was a kid. I’m sorry I took it. I’ve enclosed a check for the late fee.” 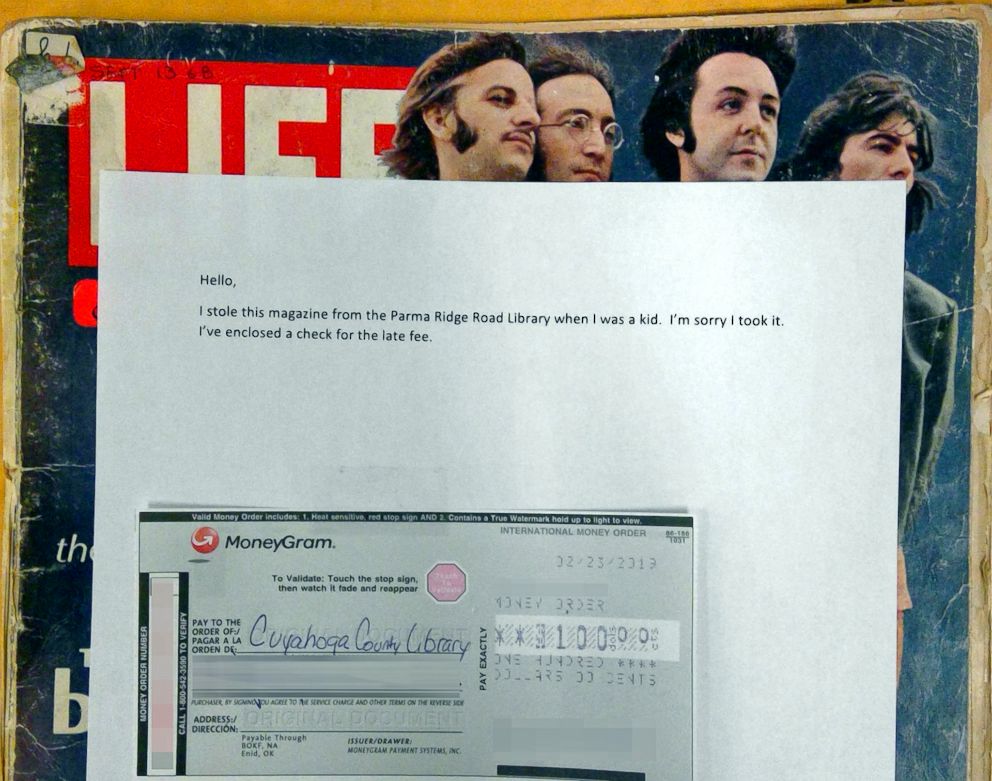 It’s been so long since the magazine went missing that the original building for the Parma branch no longer exists, Robert Rua, assistant director of marketing and communications for the Cuyahoga County Public Library, told ABC News.

The current Parma branch received the package earlier this week, Rua said, adding that it appears the sender no longer lives in the area.

Library employees got a kick out of the note, Rua said.

“This was pretty wild.”

Rua believes stealing the magazine weighed “heavily on his conscience all these years later.”

“We used to loan magazines like that,” he said. “It was pretty commonplace for someone to borrow one or leave it in the branch. Apparently he wanted to keep it and own it.”

Had the sender checked out the magazine and kept it, the library likely would have cut off the fees at some point and sent the amount to a collection agency, Rua said. However, if the fee accumulation was never-ending, the $100 likely wouldn’t have covered five decades of late fees.

Ironically, the library is hosting a food drive on Friday in which people can absolve their late fees by bringing in food items for the local food bank.

“If he’d have hung on for a few more days and brought canned food we could have wiped his fees out,” Rua said with a chuckle.