Stoned BY crows! Bird turns the tables and chucks huge pebbles at cars and pedestrians on a London street

This bizarre footage shows a crow chucking huge pebbles at cars and pedestrians on a London street.

In the footage, captured in central London, a lone crow is seen perching atop a hotel.

It grips the rock in its beak and then chucks it, landing on the pavement and fortunately not hitting any passers-by.

Garry Patrick, from Loughton, Essex, took the video, he said: ‘I was sitting in my car waiting for someone and a stone just missed my car and hit the ground.

‘I thought someone was throwing them at me.

‘Then another just missed a passer by. I looked up and saw a crow throwing stones off the roof.’ 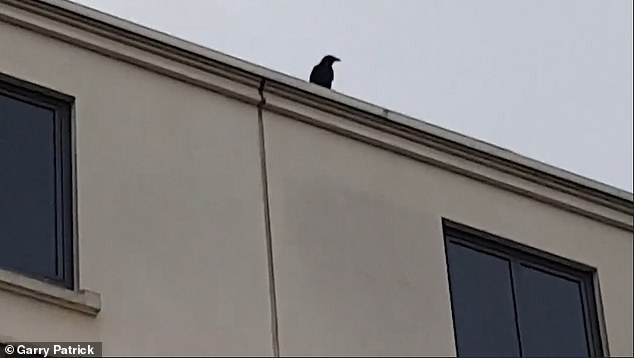 You could argue, as one social media user did, that if people like to ‘Stone the Crows’, it is only fair the crows fight back.

One user said: ‘Well, if people like to “stone the crows” it’s only reasonable that the crows might stone them back.

Crows, which are part of the Corvidae family of birds, have form when it comes to this sort of rebellious behaviour.

The birds are highly intelligent and social animals, meaning they can be more prone to create trouble and investigate things. 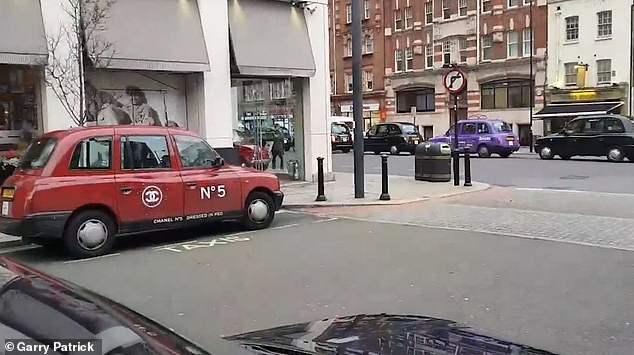 The pebble clatters to the floor, but fortunately appears to hit the pavement rather than anything else. Mr Patrick who filmed the footage, said the stone hit his car

Young crows in particular will often pick and and play with a variety of objects such as stones, sticks and other shiny objects.

Crows will also engage in this behaviour at times to get their talons on some food, by dropping foods with hard shells on the floor.

In one Japanese city, crows have even been spotted dropping nuts into traffic that they cannot break themselves by dropping from height.

The problem for the bird is then the crushed nut is stuck among busy traffic.

So the crows adapted their behaviour again and dropped the nut near pedestrian crossings, allowing them to pick up the delicious nut pieces.

According to the RSPB the crow is ‘fearless’ and in the UK is protected by The Wildlife and Countryside Act 1981.

Earlier this year a community in Sherborne, Dorset, said crows were damaging cars, attacking property and flying into windows.

In 2012 a flock was seen throwing stones at vehicles owned by politicians in Russia.