ANTI-vegan protesters marched into a plant-based cafe in London with raw meat before fighting with the staff and branding them "mentally ill".

In the tense stand-off, one of the protesters declared that vegans were "retarding the human race" as he gnawed on a slab of uncooked meat. 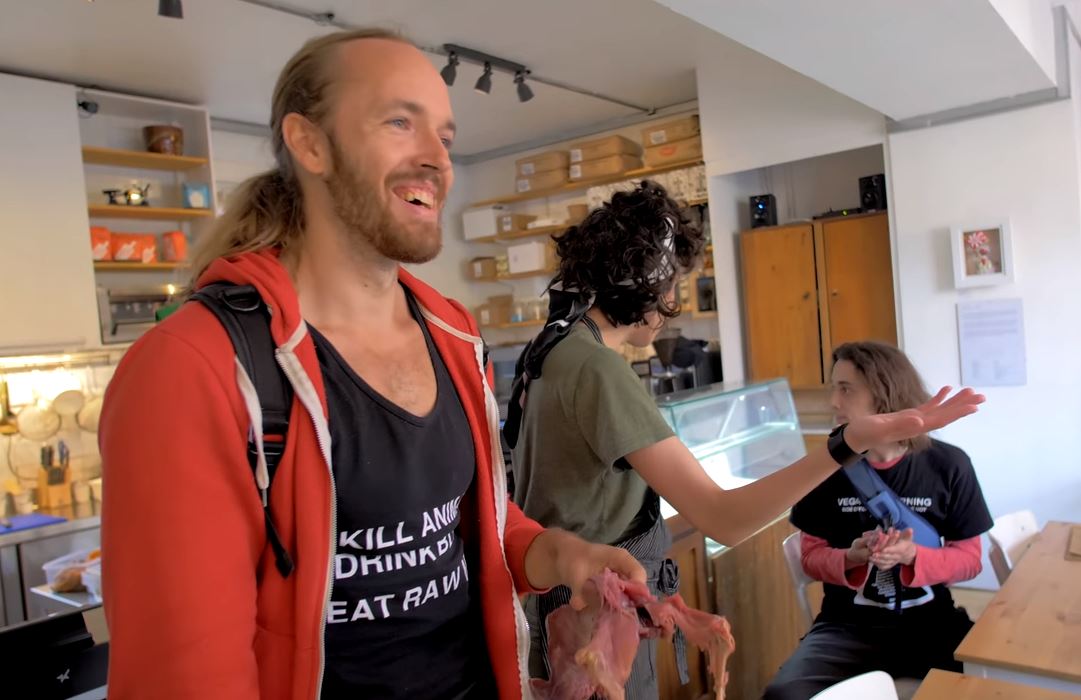 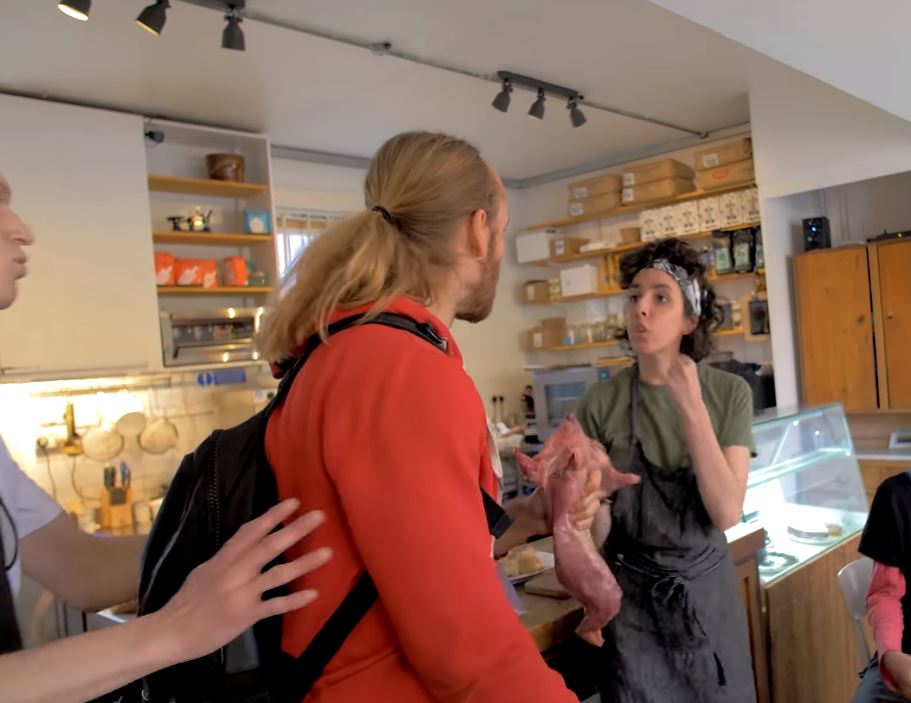 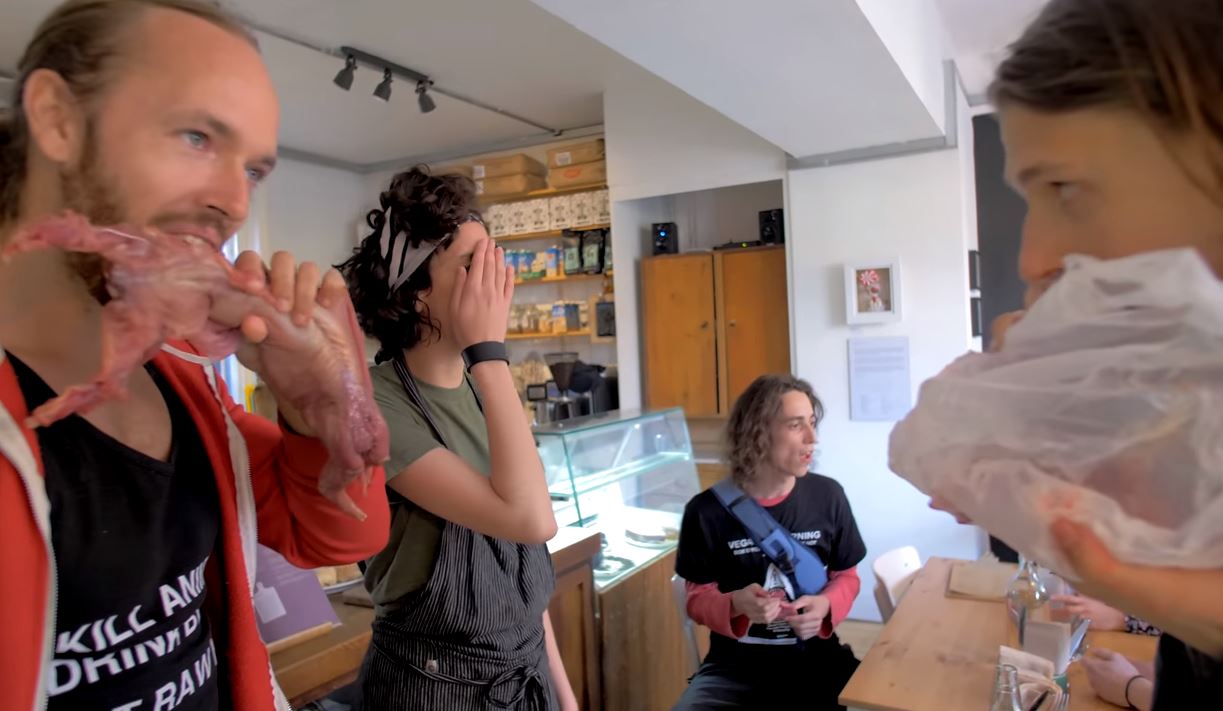 The ringleader, known as Sv3rige, walked into Essential Vegan in Shoreditch, London last month and began eating what is believed to be a skinned squirrel.

Another sat beside and pulled out a bloody piece of raw meat from his bag before stuffing it into his mouth – to the horror of the staff.

As soon as owner, Vanessa Almeida, 40, spotted the animal carcasses she said: "You are in a restaurant for vegans.

One of the group members, who was sucking on a piece of offal, shouted at her: "In November, Vegans went to a meat eaters restaurant and screamed at them. We are being very nice."

Ironically, Sv3rige, who was wearing a top with the slogan 'kill animals, drink blood, eat raw meat', is an 'ex-vegan'.

Since returning to animal meat he now makes anti-vegan videos and shares them with his followers.

Your brain is fraying on your diet. You're mentally ill. You're retarding the human race.

He had explained in one of his many YouTube videos damning vegans that even though he was once on a vegan diet, it was actually because he was a 'sungazer' – the act of looking directly into the sun as a spiritual practice.

Clearly losing her patience with the group who sat at the table grinning, Vanessa told them to get out or she will call the police.

She told them: "Go out now, you are not in your place.

He argued: "But vegans do the same thing to meat eaters!"

As the tensions heightened, the group's leader stood in front of the camera chewing on the squirrel before he was shoved by Vanessa.

He spun around and pushed her back, resulting in her raising a fist and demanding them to leave.

Speaking for the first time since they strolled into the restaurant he said to the camera: "She just attacked me.

"She just assaulted me!"

After pushing and shoving, the raw meat protesters left the cafe before the man, still holding the squirrel, said to the camera: "I was just assaulted by vegans for eating meat."

The meat eaters crowded outside the cafe, hurling abuse at the furious owner who was being held back by another staff member.

While the other, said: "The owner of the place looks paler than an albino" and shouted to her "Your brain is fraying on your diet. You're mentally ill. You're retarding the human race."

As the group walked away from the plant-based battleground, they began to plot how they wanted to get the staff arrested for assaulting them.

Speaking exclusively to The Sun online, Vanessa said: "For us the whole experience was very saddening. It was just horrible.

"They had no place being here, whatever they get up to in their own time is up to them.

"Since the attack the community has been amazing, vegans and non-vegans have been coming into the cafe just to give us hugs.

"We've had over 100 messages of support.

Sv3rige and his followers are known for turning up at vegan establishments, festivals and events and eating raw meat in front of horrified onlookers.

On his website he says: "I make videos about eating raw meat, the natural human diet.

"Anti-vegan videos because plant-based diets are the number one reason human health has been destroyed.

"I interview ex-vegans who got sick because of veganism and more."

He was in Amsterdam last year eating a hunk of meat wearing a top that read: "Go vegan and die."

The video of the demonstration was posted on YouTube gathered hundreds of comments from supporters, with some praising him for pushing the woman.

Dee Siva wrote: "I didn't know sv3rige believed in gender equality so strongly, he actually pushed her back lol"

Slick Pickle commented: "Protesting restaurants, they don't like it when it happens to them!"

Another wrote: "That guy was so amazed at the end! Priceless! And I'm not sure if you can call a vegan pushing you assault as it probably hurt them more than you! Keep going guys!"

Praising them further, one wrote: "You guys are horrible, I love it!" 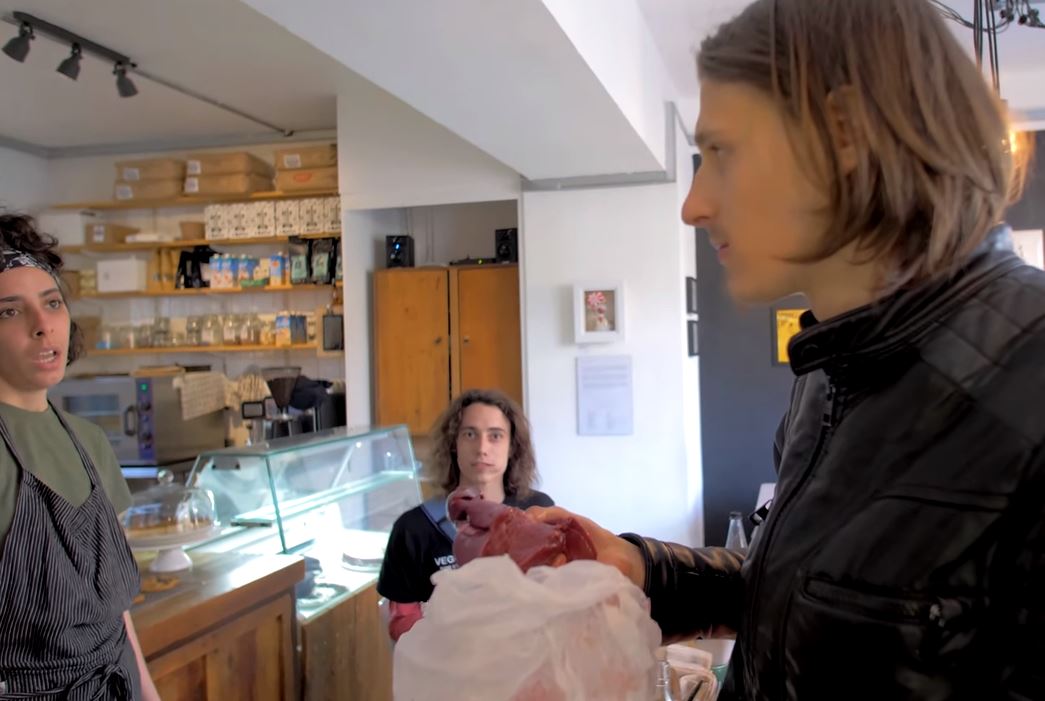 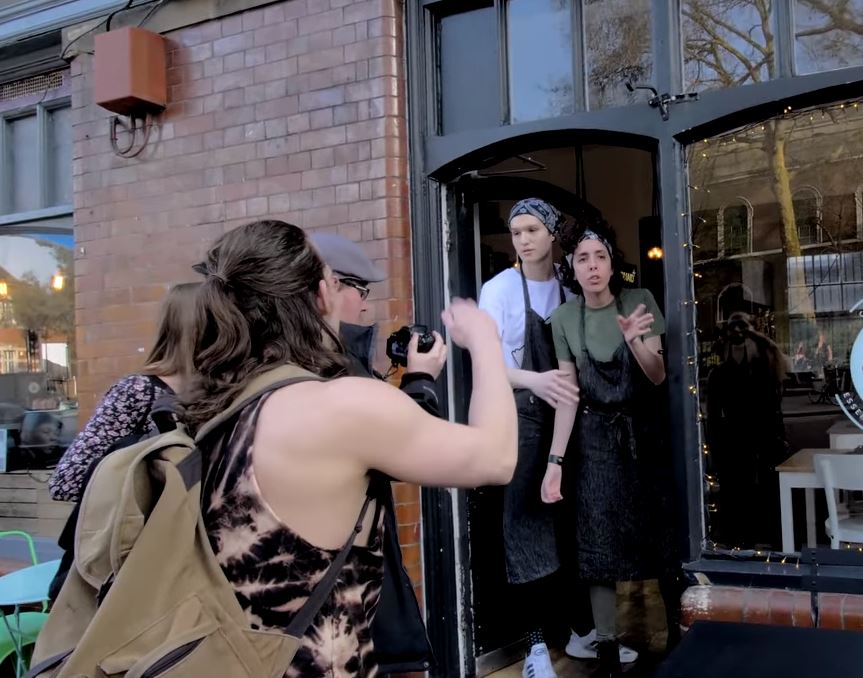 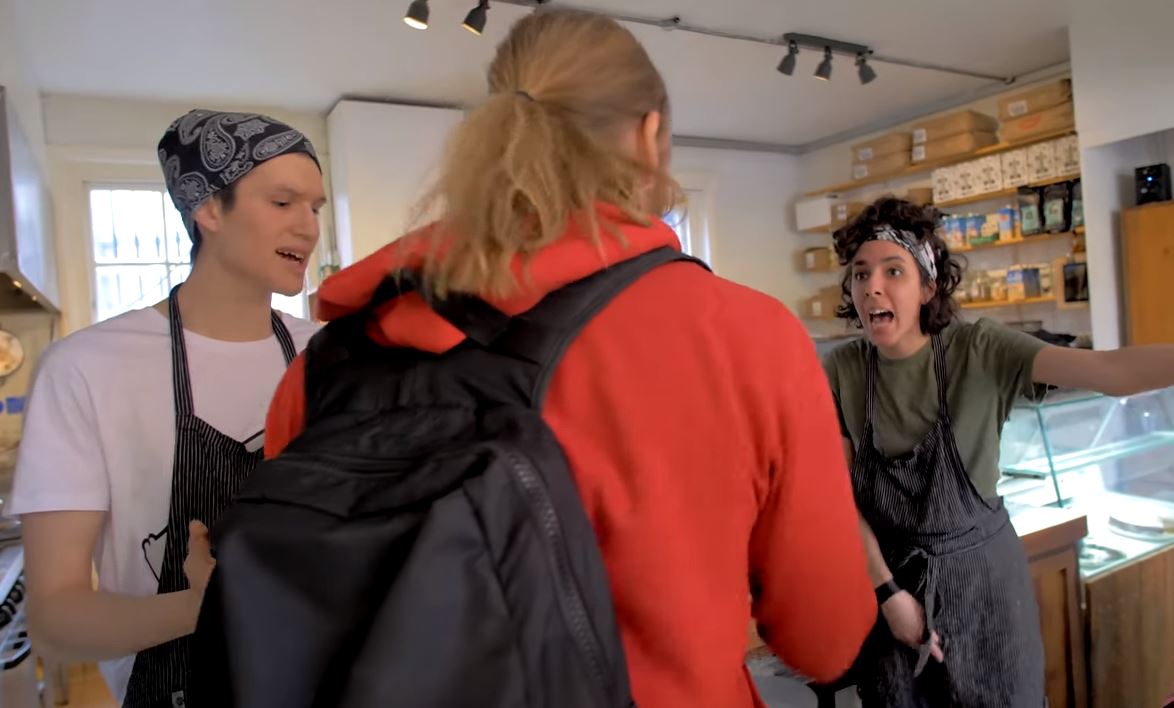 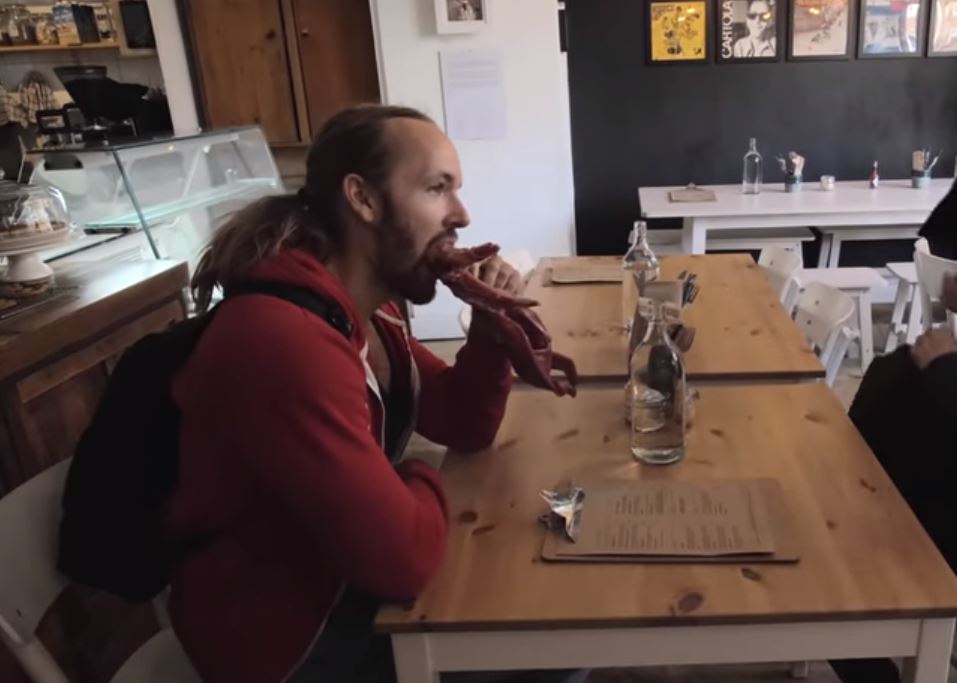 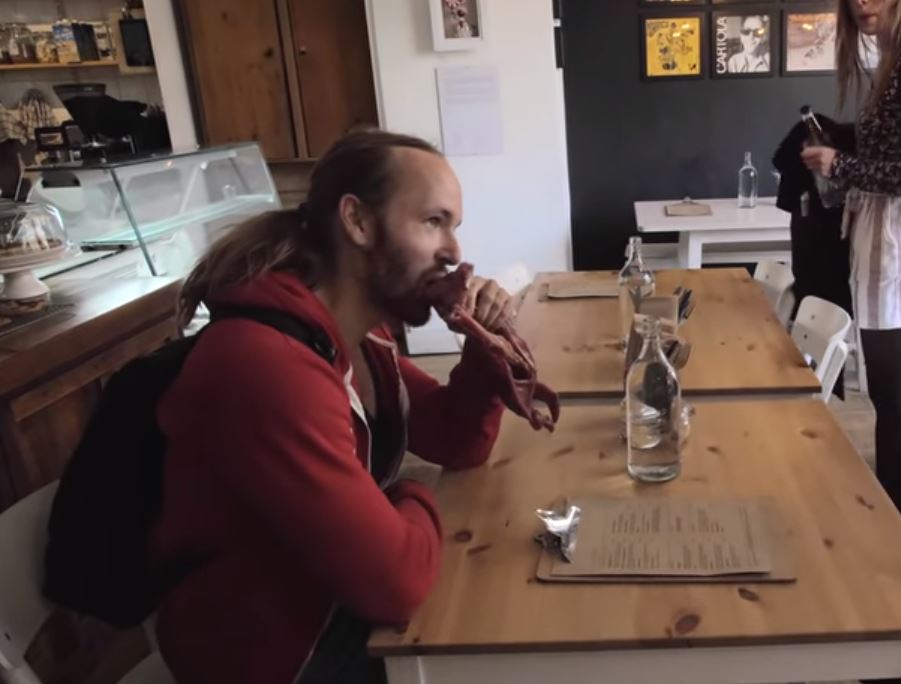 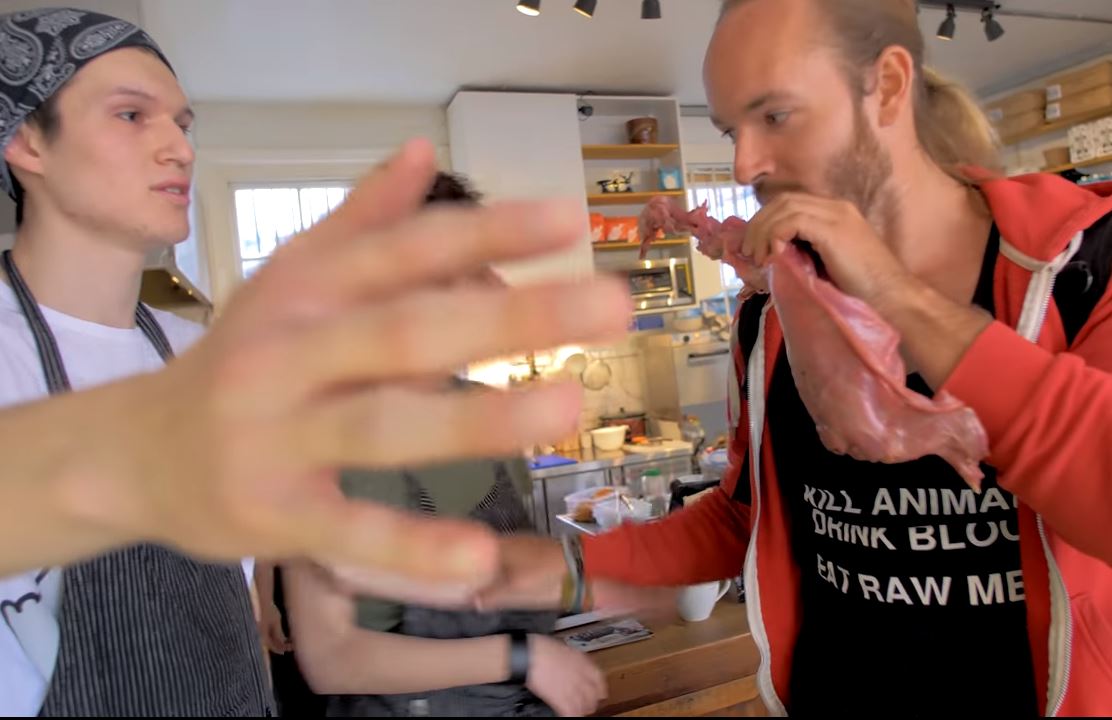