Blackmailer who met her victim at a sex party and demanded £8,000 a year from him at knifepoint in exchange for an explicit tape of them from his stolen mobile is jailed for nearly four years 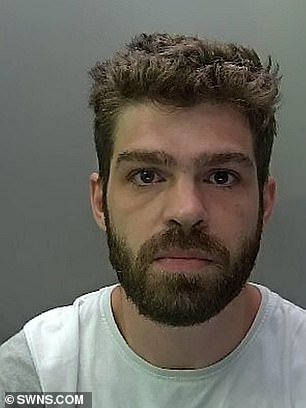 Ross Olphert, 29, an accomplice of the other blackmailer burst into the house and the pair stole the victim’s wallet and phone before drawing out £30 from a cash machine

A blackmailer who met her victim at a sex party and then tried to extort £8,000 a year from him at knifepoint in exchange for an explicit tape of them together has been jailed for nearly four years.

The victim in his 30s had befriended one of his blackmailers over the summer and went on to pay the 20-year-old woman more than £12,000 in clothes, rent and sex.

Cambridge Crown Court heard on the evening of August 3, the woman, who cannot be named for legal reasons, invited the victim to her house in St Neots, Cambridge.

Just minutes after arriving, the woman’s friend Ross Olphert, 29, burst into the house and the pair stole his wallet and phone before drawing out £30 from a cash machine.

The thugs told the victim they would send a video of him and the woman having sex to his parents and work colleagues if he did not pay them £8,000.

The hearing on November 30 heard how he told his blackmailers he could only pay them £2,000 and £600 up front that was in his flat in Stevenage.

Olphert then punched the man in the head multiple times while the woman put a knife to his throat and taunted him by saying she knew ‘how to stab someone and get away with it’.

He paid the pair £600 and was forced to drive home to St Neots.

The two were arrested on August 5 after the victim reported them to police. They were charged with blackmail and pleaded guilty.

Detective Constable John Whitworth from Cambridgeshire Police said: ‘The victim had been funding the woman’s lifestyle for more than half a year and the pair deliberately targeted him as they wanted more money.

‘I’d like to commend the victim’s bravery in coming forward following an extremely distressing incident.’