Trips on Melbourne’s major highways could blow out by half an hour compared with traffic before the COVID-19 crisis, as city-bound commuters face gridlock once lockdown measures are lifted.

A 70 per cent drop in public transport trips into Melbourne’s CBD because of infection fears could result in thousands of extra cars flooding the West Gate, Eastern and Monash freeways during morning peak hour. 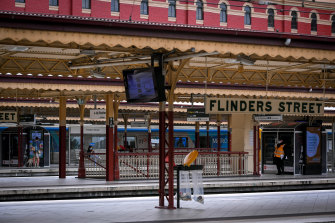 Trips into Melbourne’s CBD via public transport once the city’s lockdown ends are expected to drop by 70 per cent drop compared with pre-COVID-19 levels.Credit:Eddie Jim

Modelling by Movement & Place Consulting warns CBD-bound traffic could increase on these roads by 68 per cent, 46 per cent and 27 per cent respectively, compared with traffic before COVID-19, adding 20 to 30 minutes to trips.

The forecasts have sparked warnings by transport experts and public transport users that a return to a CBD dominated by cars and car parks would reverse decades of work by planners to make the city more liveable, cleaner and safer for pedestrians and cyclists.

They have called on the state government to promote a return to safe public transport over a reliance on cars.

As Victorian Premier Daniel Andrews eases coronavirus restrictions by allowing gatherings of up to 10 people outdoors and opening hospitality and retail by November 1, modelling prepared for The Age predicts car trips into the city will soar by 33 per cent in coming months. There will be an 90,000 daily car trips to the CBD alone.

Car journeys to the city will rise, despite all travel to the city falling 25 per cent due to an increase in working from home and unemployment. This is because most trips still made to the CBD would probably be by car, the modellers predict.

This follows the pattern in cities across the country. Car use has returned to pre-COVID-19 levels in Sydney, Brisbane and Perth, while demand for public transport has remained 30 to 50 per cent below.

Car traffic in Melbourne is currently 66 per cent of pre-pandemic volumes, while public transport use is 17 per cent.

Car travel times could also become increasingly unreliable, as people start travelling in unpredictable ways. This could have a flow-on effect for tram and bus services.

But walking and cycling – expected to increase substantially – would provide inner-city dwellers with the most reliable travel times, the analysis found.

Movement & Place Consulting modeller William McDougall said he expected a rise in local trips with more people working from home during the day, but predicted a greater increase in peak-hour car trips to the CBD.

The analysis proved the key role public transport played in reducing car traffic, Mr McDougall said. “The conflict is that we need to keep people safe while also getting as many people onto public transport as possible,'' he said. ''It’s going to be a difficult balance, at least initially.”

The Victorian Chamber of Commerce and Industry is also calling for park-and-ride facilities at the VRC showgrounds in the west and Yarra Park in the East, and for a portion of the $100 million in government funding earmarked to revitalise the CBD economy to subsidise parking for office workers.

Dr Taylor said state and local governments should not merely submit to the growth in traffic in the city, warning against "knee jerk" reactions to the pandemic that allowed more vehicles into the CBD.

"We are poised to go back to the 1950s – and these are tired ideas, long proven to not work. Or to the traffic-laden, hollowed out doughnut of the 1980s."

Dr Taylor said better use of off-street parking was preferable to free on-street parking, which would probably backfire. Dr Taylor cited a trial in Warrnambool where all-day free parking was hogged by a small number of motorists, deterring shoppers.

Since the start of the pandemic, the Victorian Transport Department has added 95 train services and new tram shuttle services, and brought in more cleaning. It is also trialling an app to update commuters about crowding.

But the department is resisting crowd control measures used in Sydney in which socially distanced seats are marked with green stickers, commuter numbers are capped and crowds are monitored on CCTV cameras.

There are few if any COVID-19 cases concretely linked to public transport, where safety precautions such as face coverings have been endorsed. Cities such as Hong Kong, Seoul and Tokyo have mainained high transit use and low case numbers.

The Victorian department believes capping numbers on trains or trams will cause crowding elsewhere. Trains and trams would be only 15 per cent full under social distancing, internal modelling has found.

But Deakin University’s chair in epidemiology, Catherine Bennett, said crowd control measures should be considered for the busiest stations or public transport services, either by having people on the ground or through surveillance.

Public Transport Users Association president Tony Morton said authorities needed to “rebuild” and promote the network as safe. Increased vehicle emissions and high traffic volumes threatening pedestrians and cyclists would be “the future we will be making for ourselves if we neglect the need to make public transport safe”, he warned.

Mr Morton also called for a boost in orbital bus services in the outer suburbs, arguing there would be an increase in demand.

A Transport Department spokesman said the department had done what was required to ensure public transport was safe and ready for when people returned.