Backslaps, high-fives and back-pats all round: Body language expert JUDI JAMES on the signals given off by Boris Johnson and his EU friends

Boris Johnson was being feted by nearly all the European leaders today and expressed ‘genuine delight’ in Brussels, according to a body language expert.

The PM was triumphant at the EU summit today as he announced the EU had agreed to his new Brexit deal.

Mr Johnson insisted ‘now is the moment to get Brexit done’ after he signed off the blueprint, which deletes the hated Irish backstop.

The PM will ask MPs to vote for the deal at a sitting of the House of Commons on Saturday, dubbed ‘Super Saturday’ in what is likely to be a titanic struggle to pass his deal.

She said: ‘It’s backslaps, high-fives and back-pats all round here with Boris apparently being feted by nearly all the other EU leaders in rituals that suggest victory, celebration and some hints of utter relief. 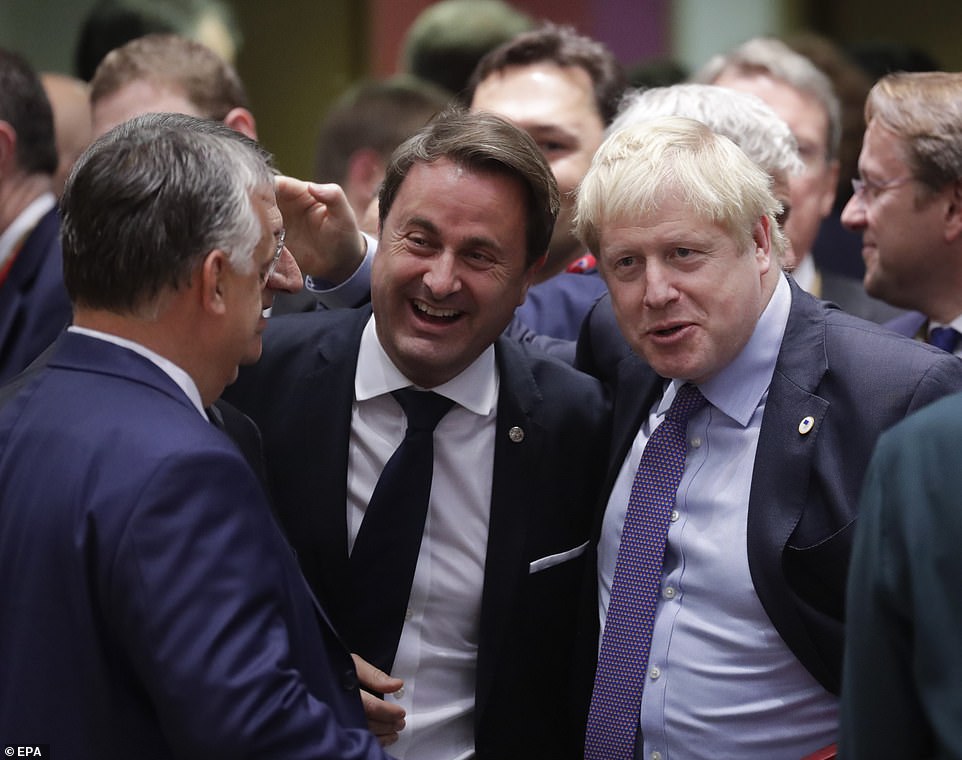 Mr Johnson seemed in high spirits as he greeted EU leaders including Xavier Bettel (centre) at the summit in Brussels today. The PM and his Luxembourg counterpart had an awkward clash when he visited the country recently and was ’empty podiumed’ after refusing to carry out a press conference amid noisy protests Mr Johnson, pictured with Luxembourg Prime Minister Xavier Bettel to the left of him, insisted ‘now is the moment to get Brexit done’ after he signed off the blueprint, which deletes the hated Irish backstop 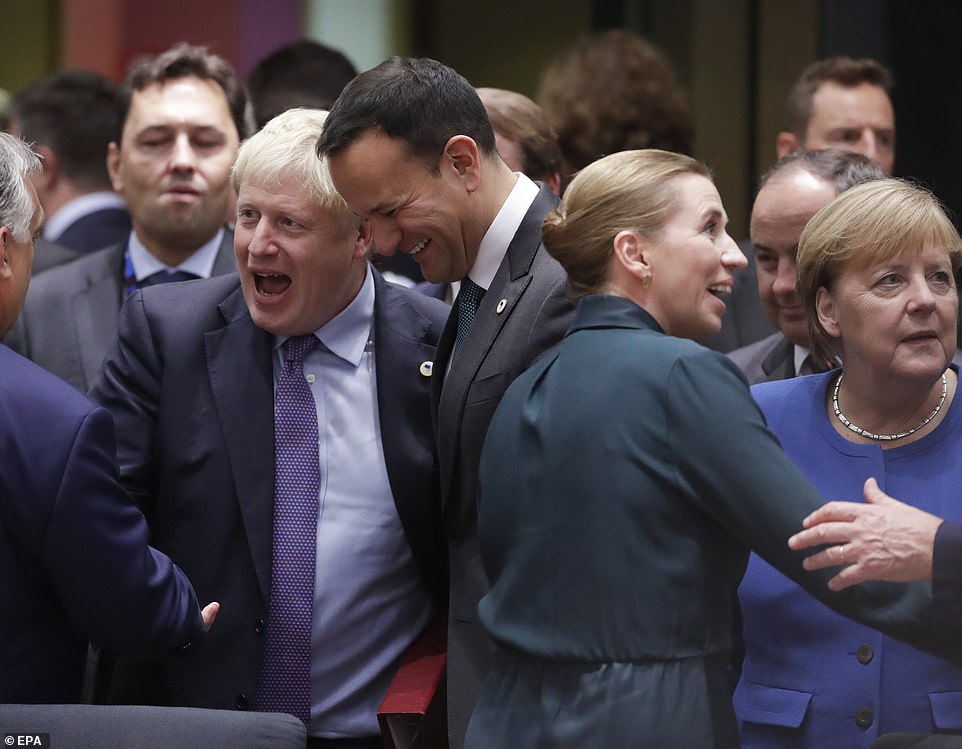 ‘Gradually relishing the popularity, Boris starts out using a rather wary eye-checking of Angela Merkel, who is apparently the only leader projecting a more businesslike and tempered mood here as she uses several pointing finger gestures to suggest there could still be some trace of animosity between herself and the PM.

‘As the handshakes keep coming though, Boris’s smile widens until we have at least five ‘sunburst’ creases at the corners of his eyes to suggest genuine delight.

‘Leo Varadkar can be seen waiting to get his greeting in, grinning openly as he and Boris perform a high clasp close to their chests to suggest tight rapport.

‘Luxembourg PM Bettel’s open-mouthed grin suggests the emotional pasting he gave Boris when he empty-lecterned him recently has been consigned to history and the two men perform a sawing handshake before part-hugging each other in turn like the closest and fondest of old friends. 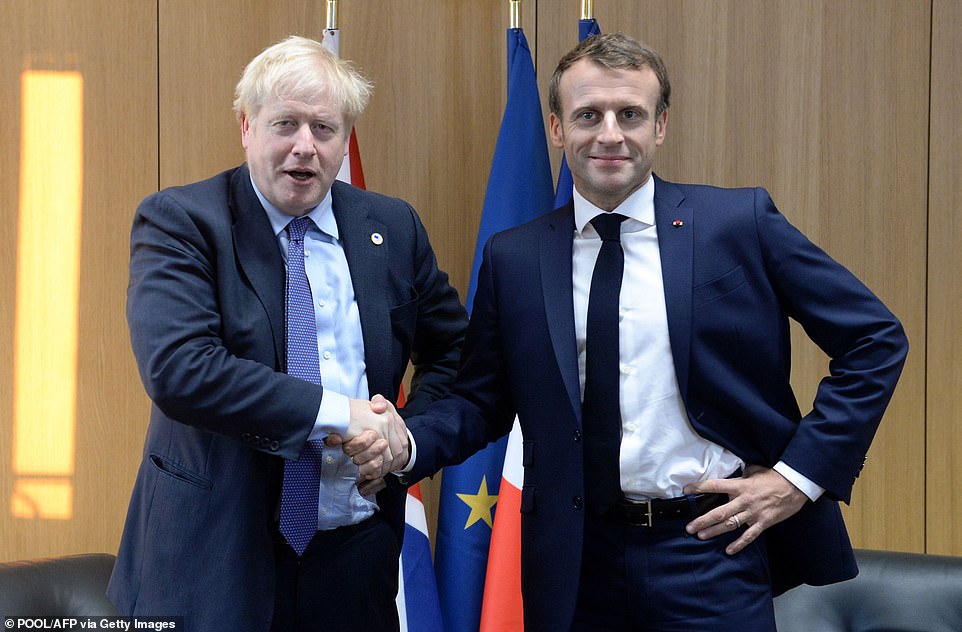 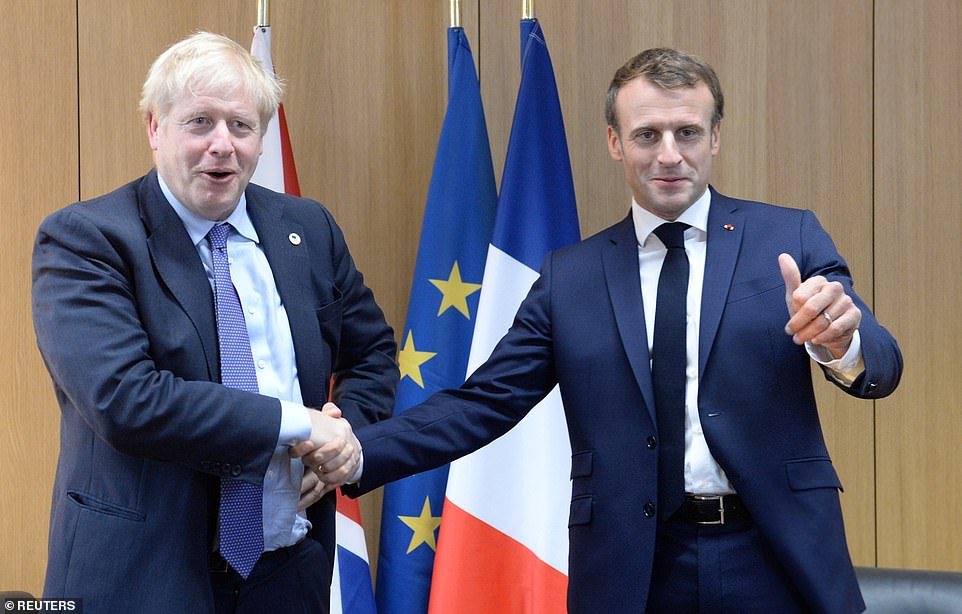 Boris Johnson poses with French President Emmanuel Macron, who appears to give a thumbs up during the crunch EU summit

‘Boris reserves his strongest friendship rituals for Macron though. He begins by performing his Benny Hill/Fred Scuttle mock salute to make the French leader laugh in recognition before a prolonged handshake that ends with Macron clasping Boris’s hand in a clamping gesture to hold him in place as he greets Angela Merkel.

‘Boris did arrive with Merkel so presumably had no need to shake her hand at this point but having shaken with the entire group by then he does seem to offer his hand, which Merkel appears to decline.

‘Her gestures suggest she’s interested in the body language interplay between Boris and Macron but the way Macron grips Boris’s hand as he greets Merkel suggests he might have been expecting and trying to prevent some frostiness between the German leader and our PM.’