The Bank of England said on Friday it has removed 10 oil paintings and busts of seven governors and directors who had connections to the slave trade.

The central bank said following Black Lives Matter protests last year it would review its art collection and hired a researcher for its museum.

They had been on display within the Bank of England’s headquarters and adjoining museum in London. 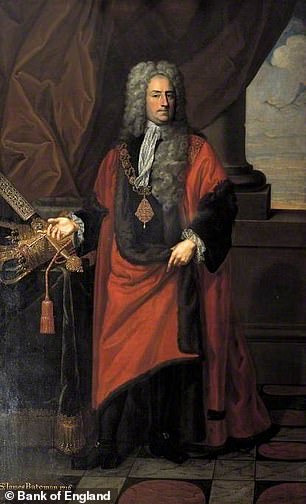 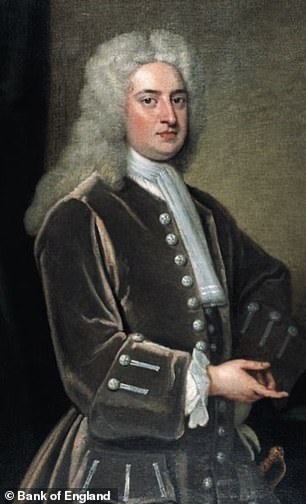 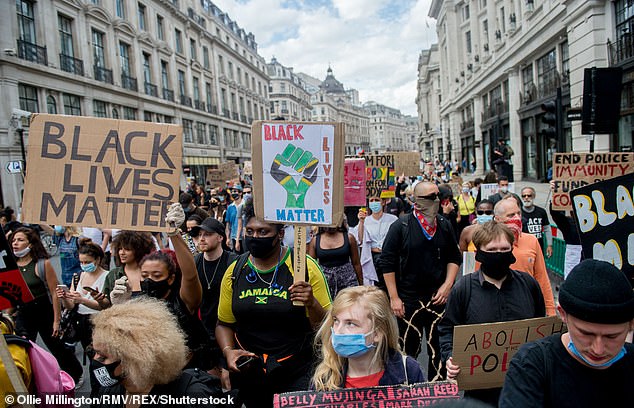 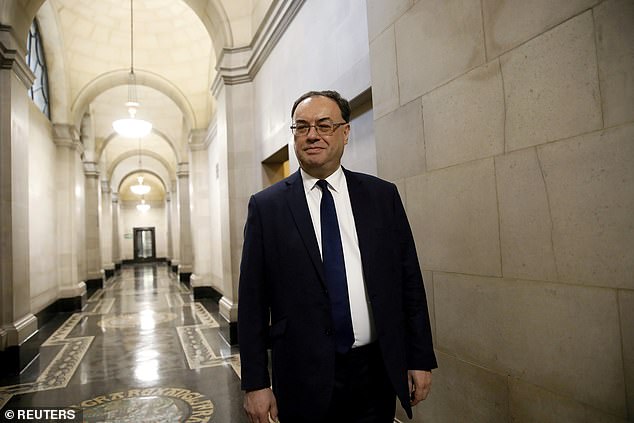 The seven BoE chiefs and their links to the slave trade

Sir Robert Clayton: The merchant banker and Lord Mayor of London (1679–1680) was a member of the Court of Assistants to the Royal African Company, the largest slave trading enterprise of the time. He was director of the Bank of England from 1702 to 1707. Sir James Bateman: Merchant and MP from 1711 to 1718 who served as Lord Mayor of London and Governor of the Bank of England. He acted as a teller in favour of preserving the Royal Africam Company’s monopoly on the British slave trade.

Sir Gilbert Heathcote: A British merchant and Whig politician who was an MP between 1701 and 1733. He was a Governor of the Bank of England and was Lord Mayor of London in 1711. He was a colonial trader whose brothers were based in Jamaica. He appears not to have owned land or enslaved people there, according to UCL’s Legacy of Slavery project.

William Manning: Governor of the Bank of England from 1812 to 1814, he was a key figure in the slave economy of a number of islands in the Caribbean. As an MP he resisted moves towards emancipation. John Pearse: MP for Devizes and Governor of the Bank from 1810 to 1812. He had investments in Caribbean slave plantations.

Robert Bristow: An MP and the slave owning and slave trading grandson of Alderman Robert Bristow who inherited his namesake’s slaves and plantations in Virginia and was a director of the East India Company and the Bank of England. William Dawsonne: Director of the bank from 1698 to 1719.

A spokesman said: ‘The review is now complete and artworks depicting former Governors and Directors, where we have been able to establish links to the slave trade, have been removed from display.

‘We have also appointed a researcher to work in our Museum to explore the Bank’s historic links with the transatlantic slave trade in detail.’

They added: ‘This work will inform future Museum displays interpreting these connections.’

Announcing the review in June 2020, the BoE said it had never itself been directly involved in the slave trade.

But it said it was aware of some ‘inexcusable connections’ involving former governors and directors, and apologised for them.

The 330-year-old Lloyd’s of London insurance market advertised in February for an archivist who would research artefacts related to the African and Caribbean history of slavery and abolition.

The City of London, where both financial institutions are located, is itself reviewing what to do about the statue of William Beckford in its ancient Guildhall home.

Beckford was twice Lord Mayor of London in the 18th century and had plantations in Jamaica with slaves.

Last year the portraits of 11 other senior figures were removed by the Bank of England as it apologised for their ‘inexcusable’ role in ‘an unacceptable part of English history’. The Bank noted that it was never directly involved in slave trading or owning.

The former chiefs owned a total of 5,000 slaves, from Daniel Giles in 1795 who was the co-mortgagee of estates in Grenada to Benjamin Buck Greene in 1873 who was a plantation manager in St Kitts.

Others were Jeremiah Harman in 1816 who had 409 slaves and three estates in St Kitts; John Palmer in 1830 with 238 slaves and two estates in Grenada; and Timothy Curtis in 1837 who had 206 slaves and an estate in St Vincent.

John Reid in 1839 had 3,112 slaves and 17 estates in Jamaica, the Virgin Islands and other areas; Thomson Hankey Jnr in 1851 who owned 534 slaves and four estates in Grenada; and West Indian merchant Sheffield Neave in 1857. 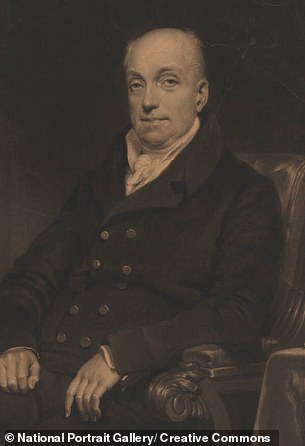 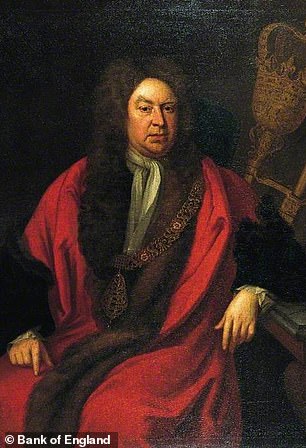 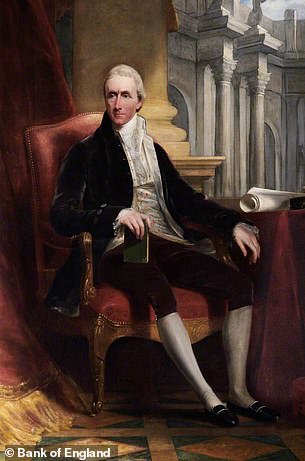 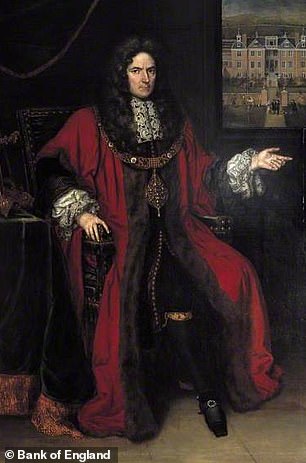 William Manning, who was involved in the Caribbean slave economy; and Sir Robert Clayton, a member of the Court of Assistants to the Royal African Company

The final two former governors were Alfred Latham in 1861 who owned 402 slaves, three estates in Jamaica, Nevis and Tobago; while Bonamy Dobree in 1859 had 19 slaves and two estates in British Guiana.

The Bank acknowledged its role in the trading and transportation of thousands of people for the first time, lamenting the ‘unacceptable part of English history’ and saying it will remove images of governors and directors involved in the ‘inexcusable’ trade.

Ministers in June blocked a museum’s attempts to remove the statue of a 17th-century merchant who made part of his fortune from the slave trade in the latest government intervention in the debate over colonial monuments.

The Museum of Home, which opened after an £18million revamp, was formerly known as the Geffrye Museum after Sir Robert Geffrye, a Lord Mayor of London and slave ship owner who funded the almshouses that now house the attraction. 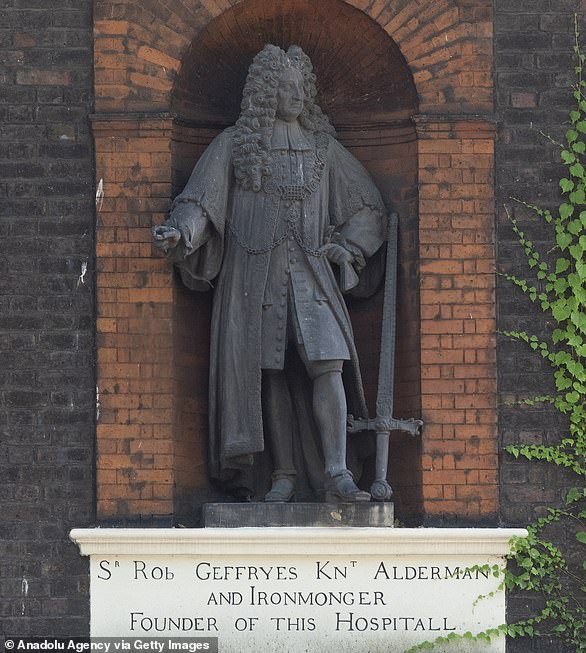 The Museum of Home was formerly known as the Geffrye Museum after Sir Robert Geffrye, a Lord Mayor of London and slave ship owner who funded the almshouses that now house the attraction

Local campaigners had backed calls to take down the monument, which has a prominent position overlooking the road in Hackney, a multicultural area in east London, but Culture Secretary Oliver Dowden intervened to stop the move.

Dowden told curators that the government’s policy is to ‘retain and explain’ when it comes to monuments to controversial figures, and would decline planning permission to move it from the Grade I-listed building. 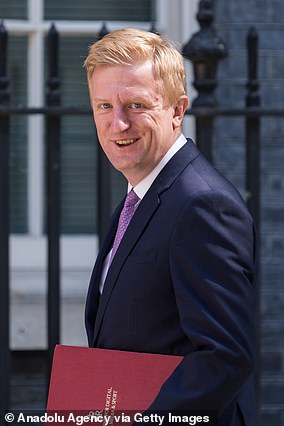 When the museum opened it included a plaque telling visitors: ‘These buildings were founded by Robert Geffrye, an English merchant who profited from the forced labour and trading of enslaved Africans.’

Tamsin Ace, director of creative programmes for the museum, told The Telegraph: ‘The museum staff feel that by moving it to an alternative location on site we can explain it better.

‘Having it at height on a really visible thoroughfare in Hackney is problematic.’

Museum director Sonia Solicari admitted she was in a ‘very challenging situation’ given that government censure could lead to a loss of the institution’s main source of funds.

Mr Dowden raised the issue of funds in a letter to the museum last year, in which he warned that the ‘significant support that you receive from the taxpayer is an acknowledgement of the important cultural role you play for the entire country.

‘It is imperative that you continue to act impartially, in line with your publicly funded status, and not in a way that brings this into question.’ 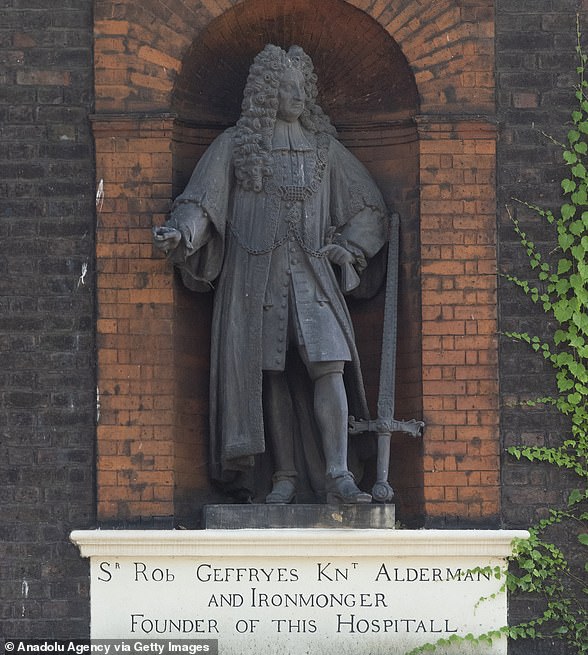 The Museum of Home was formerly known as the Geffrye Museum after Sir Robert Geffrye, a Lord Mayor of London and slave ship owner who funded the almshouses that now house the attraction