Borders go back up in Europe: Belgium bans non-essential travel and France demands negative tests from ALL EU nations while others impose quarantines to stop Covid spread

Europe’s borders are closing once more with Belgium banning non-essential travel from today, France demanding negative tests from all EU visitors and Germany looking at ways to cut air traffic to ‘almost zero’.

With virus deaths still piling up across Europe and governments alarmed by new strains of Covid-19, EU travel restrictions have gone beyond sealing off the UK and are now curtailing free movement on the continent too.

France and Italy are among the countries requiring negative tests to enter from across the EU, with France generally demanding gold-standard PCR tests although UK hauliers are allowed more rapid screening.

Germany generally has a 10-day quarantine instead, but is also checking test results from some high-risk countries and is gearing up to impose tougher controls on its nine usually free-flowing land borders.

Liberal Sweden does not have a quarantine policy at all, while Switzerland is taking a more surgical approach and picking out particularly high-risk areas of neighbouring countries.

Travel from outside Europe is still kept to a minimum across the EU, with some countries imposing special requirements for Brazil and South Africa which also have their own alarming strains of the disease.

It comes as Britain draws up a ‘red list’ of countries whose travellers will face 10 days of hotel quarantine when they arrive in the UK, after Boris Johnson’s government was criticised for keeping borders open earlier in the pandemic.

Infection rates are heading sharply upwards in Portugal (green) and Spain (purple), although they are falling in the UK (light blue) and appear to have passed their peaks in Italy and Germany 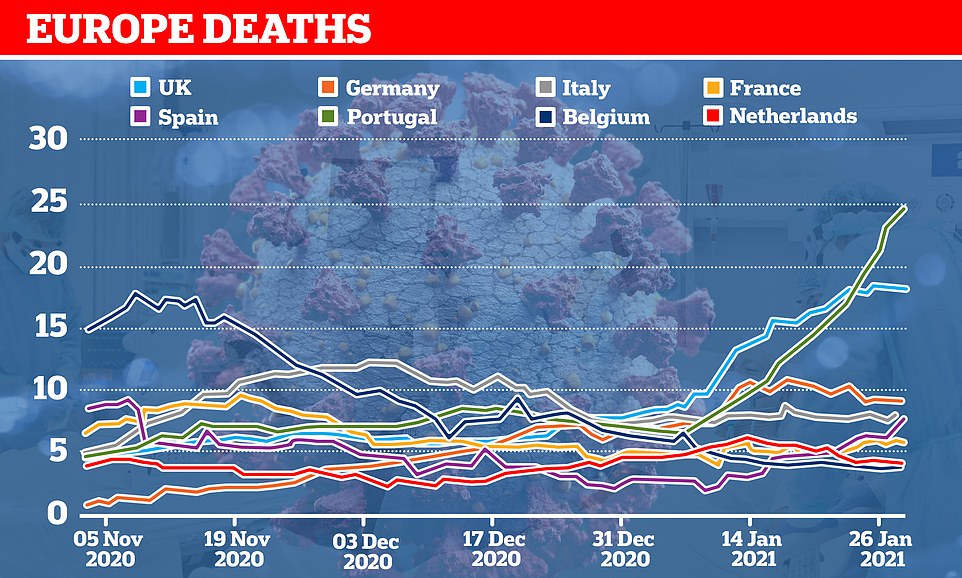 Death rates remain stubbornly high in much of Europe and have rocketed in Portugal following a rise in cases there, while the UK’s daily death rate appears to have plateaued after cases started falling

Here is how borders are going back up in many EU countries:

After fears over the UK’s new virus strain prompted France to start demanding negative tests from incoming lorry drivers last month, the French government has now widened its measures to cover the whole of the EU.

People arriving from EU countries by air or sea must produce a negative test dated less than 72 hours earlier – but the checks do not apply to those coming in by road or rail.

The rules are tougher for people coming from the UK, who can only travel for certain reasons and sometimes have to isolate for seven days in addition to having a negative test.

But this does not apply to cross-Channel hauliers, who also have a special exemption meaning they can take so-called ‘lateral flow’ tests which produce a quicker result than PCR tests.

Those who do get into France are subject to the nationwide curfew which currently runs from 6pm to 6am, with official paperwork needed to get around during those hours, including to leave the country.

Germany is considering almost completely halting flights into the country to slow the spread of more infectious strains of the virus, interior minister Horst Seehofer said on Tuesday.

Under current rules, people entering from high-risk countries such as Britain must provide a negative test result from within the previous 48 hours.

There is also a lower tier of countries including France and Italy where a test is not required but people must go into a 10-day quarantine, which can be shortened to five if they test negative during their isolation.

Federal police are already carrying out checks at land borders, and Seehofer warned that these could become ‘significantly stricter’ – while suggesting that air travel could be ‘reduced to almost zero’.

Angela Merkel told party colleagues that Germans had a right to expect ‘certain precautions at the border’, with hundreds of deaths still piling up every day. 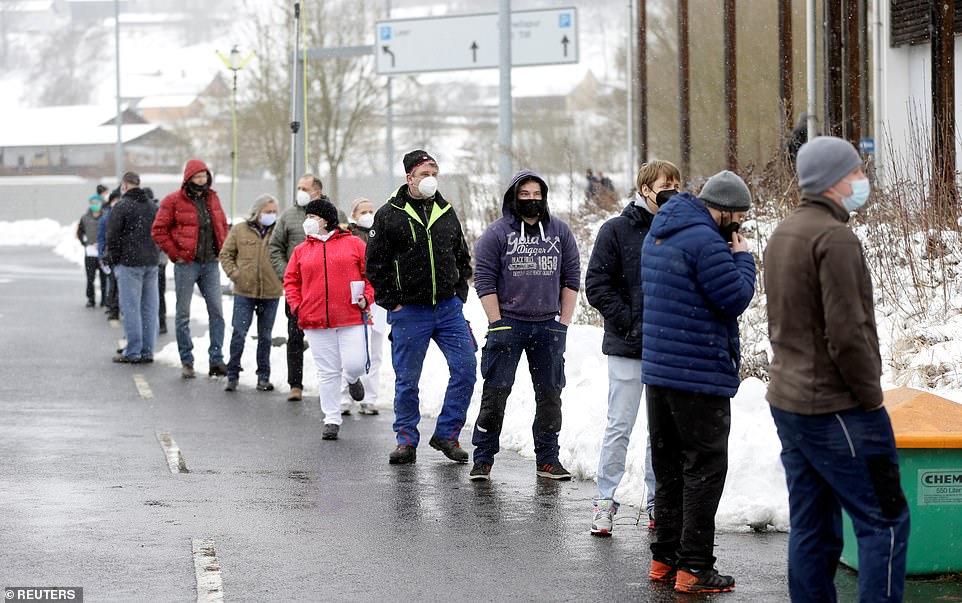 GERMAN-CZECH BORDER: People queue at a testing centre in Folmava on Monday to cross the border into Germany, which is eyeing up stricter controls at its nine usually free-flowing land borders

Visitors from most of Europe do not need a to provide a compelling reason for entering Italy, but they do have to show a negative result from a test taken within the previous 48 hours.

People who cannot provide a negative test will be sent into isolation and put under ‘health surveillance’, the Italian government says.

The negative test requirement does not apply to the mini-states of San Marino and Vatican City, or a handful of low-risk countries such as Australia and New Zealand.

But stricter rules for the UK mean that people can only enter from Britain if they were registered as Italian residents before December 23 or if they have a ‘reason of absolute necessity’ to go to Italy.

And there are even tougher rules for Brazil, where no flights can go to Italy at all and where anyone who had recently been to the South American country when the ban was imposed was required to get a test.

Spain’s list of high-risk areas where a negative test is required includes essentially the entire EU as well as numerous ‘third countries’ such as the UK and Brazil.

Travellers planning to go to Spain have to fill in a form which will generate a QR code that they can show to border officials when they arrive at Spanish airports.

The tourism-reliant country has been lobbying the EU to set up ‘vaccine certificates’ which could allow people to evade travel restrictions once they receive a jab.

‘Vaccine certification is something we are going towards inevitably,’ the country’s foreign minister Arancha Gonzalez claimed last week, with Spain in the midst of an alarming rebound in infections.

As of today, non-essential trips in or out of Belgium are banned until March 1, with the government saying it will monitor arrivals by rail, road, air and sea.

The country wants to avoid a repeat of last winter when Belgians went on Alpine ski holidays, bringing the virus back with them, or the Christmas-New Year period when an estimated 160,000 residents took trips abroad.

‘When people travel, the virus travels with them and we also have seen, from sampling of tests, that people who have travelled show more cases of the variants than those that have not,’ PM Alexander De Croo said.

Anyone trying to enter has to fill out their essential reasons in a ‘sworn statement’, which can include travel for medical reasons or for everyday cross-border activity.

For those who are allowed to enter, there are generally no other restrictions – but people coming in from Britain, South Africa and South America must go into quarantine for 10 days. 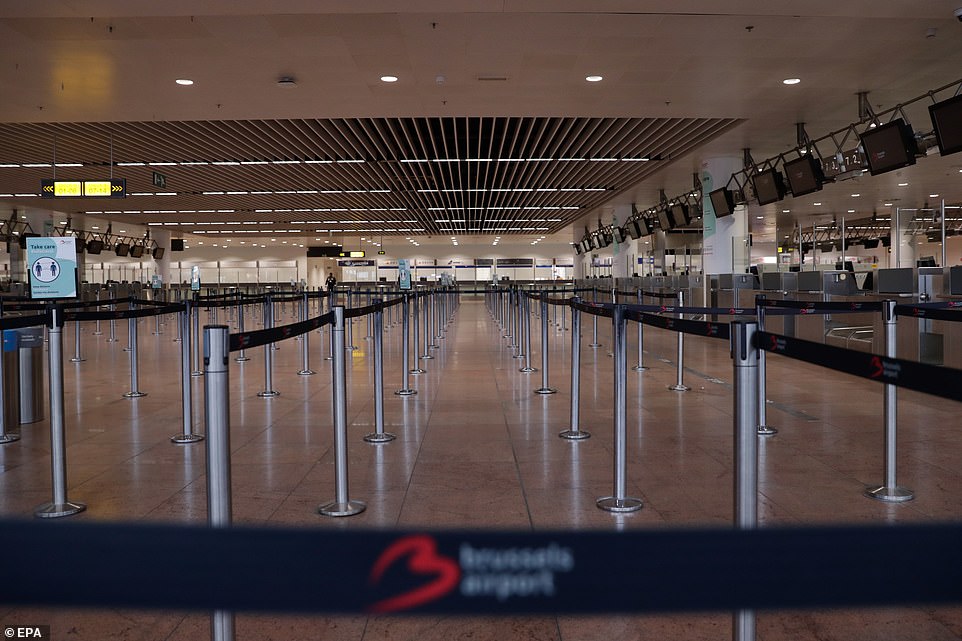 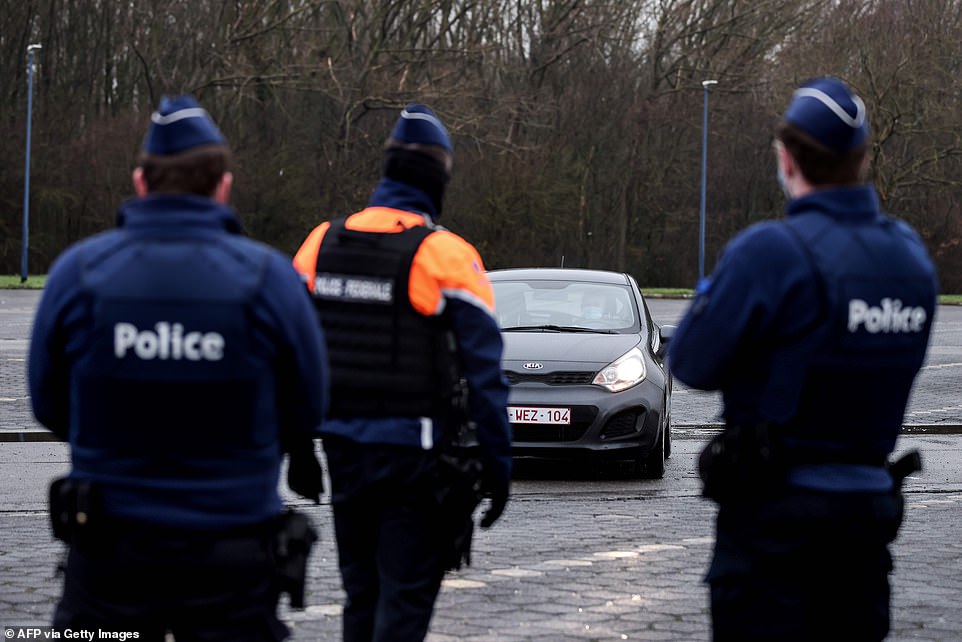 BELGIUM: Police officers watch a car approach a border crossing near France on Wednesday after the smaller country banned non-essential trips in and out of the country

In keeping with the liberal approach it has taken throughout the pandemic, Sweden does not impose quarantines on EU arrivals and does not even make masks compulsory at its airports.

However, there is an outright ban on travel from the UK, with negative tests required for the few people who might be allowed to enter for essential reasons.

A ban on entry from outside the EU remains in place until at least March 31.

There are also stricter rules for Norway and Denmark where the UK virus strain has already been detected, and where people can only enter Sweden for specific reasons.

Those who do make it into Sweden from high-risk countries are recommended to isolate for seven days but this is not compulsory.

Switzerland’s 10-day quarantine rule applies only to a relatively small list of countries including Britain, the US, Portugal and the Netherlands.

In addition, Swiss authorities have pinpointed particularly high-risk areas of neighbouring countries – with only two states of Germany and three regions of Italy subject to quarantine rules.

But under new rules to take effect in early February, people will also have to produce a negative test result – although this may allow them to shorten their quarantine period.

Switzerland said today it was prepared to spend more than a billion dollars on testing for asymptomatic Covicases, saying they were probably responsible for most new infections. 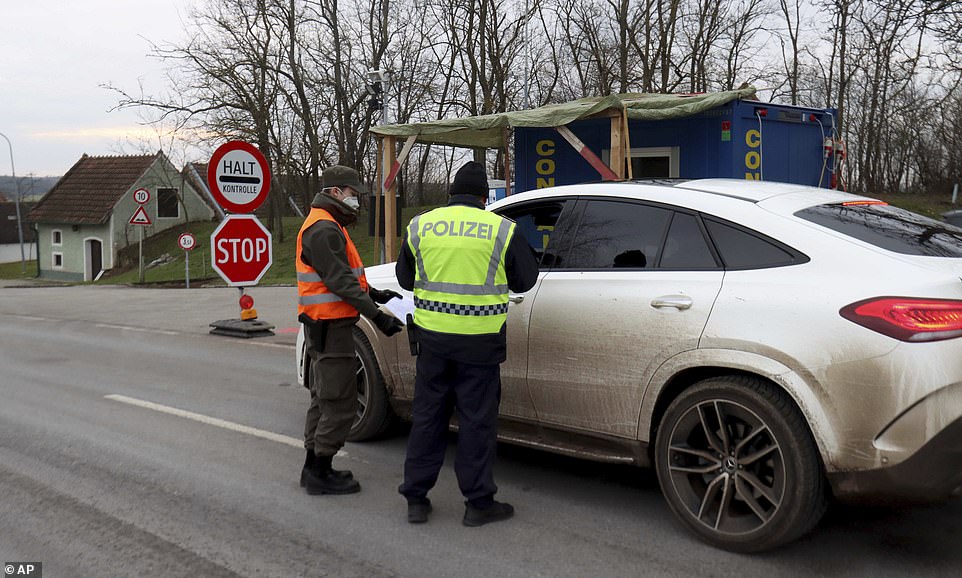 AUSTRIA: A police officer and an Austrian army soldier speak to a driver as it crosses the border from the Czech Republic into the Alpine country, which is carrying out random checks at its land frontiers

People entering Austria generally face 10 days in quarantine, although this can be shortened to five if a PCR or antigen test comes back negative at the halfway point.

Flights from the UK are banned from landing in Austria altogether until February 7.

Austrian border officials are carrying out random checks, and people can only enter the Czech Republic or Slovakia at certain crossings.

While Dutch borders remain open, new arrivals must quarantine for 10 days and travellers from high-risk areas have to show a negative test to enter the country.

Flights are banned altogether from Britain, South Africa and all of South America, while UK passenger ferries are also banned from docking in the Netherlands.

Dutch officials believe that the UK variant is now causing around a third of cases, forcing the country into its first curfew since World War II.

But anti-lockdown protests have turned violent in recent days with hundreds of people arrested over three days of rioting in Amsterdam and elsewhere.