Mr Hunt was fired after he refused to move from his role as foreign secretary to a lesser ministerial job as Mr Johnson stamped his authority on his new government.

Allies of Mr Hunt had urged the newly installed prime minister to keep him in the Cabinet but the pair were unable to reach a satisfactory agreement as the former refused to budge.

Mr Hunt responded to his departure from the government by saying he would now be focusing on ‘the biggest challenge of all – to be a good dad’.

He was replaced at the Foreign Office by Dominic Raab, a leading Brexiteer and prominent supporter of Mr Johnson.

Mr Raab was also made Mr Johnson’s effective deputy prime minister as he was appointed First Secretary of State which means he will stand in for the PM when he is out of the country. 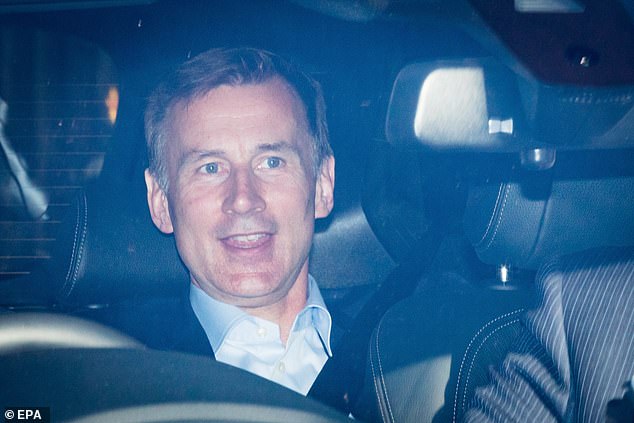 Jeremy Hunt, pictured leaving Parliament this evening, was sacked as foreign secretary after he refused to move to another job when asked by new PM Boris Johnson 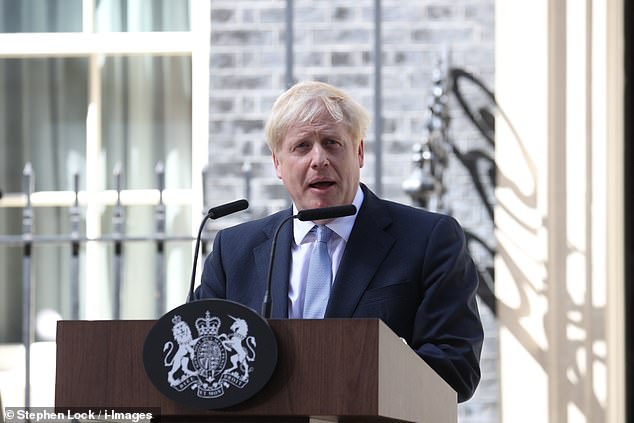 Mr Johnson, pictured today as he addressed the nation in Downing Street, has launched a full scale clear out of Theresa May’s old Cabinet as he sacked numerous ministers to make way for his own picks 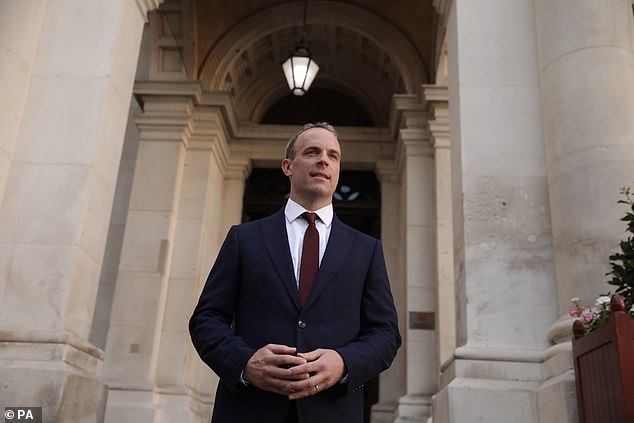 Mr Hunt has been replaced at the Foreign Office by Dominic Raab, pictured outside the FCO this evening, with the former Brexit secretary also made First Secretary of State

The decision to send Mr Hunt to the Tory backbenches effectively draws a line under the Conservative leadership contest which saw him battle Mr Johnson for seven weeks for the keys to Number 10.

Ultimately he was crushed by Mr Johnson who secured more than 92,000 votes while Mr Hunt managed just shy of 47,000.

Mr Hunt tweeted after his dismissal: ‘I would have been honoured to carry on my work at the FCO but understand the need for a new PM to choose his team.

‘I’ve been a cabinet minister for every hour my 3 gorgeous children have been alive.

‘So whilst it may seem strange for someone who just tried to become PM (& is a terrible cliche) I have decided now is the time for the biggest challenge of all – to be a GOOD DAD!’

Both men had faced questions about their respective family lives during the Tory leadership campaign.

Mr Hunt said it had been a ‘huge honour’ to head up the ‘finest diplomatic service in the world’.

He also thanked the one third of the Conservative Party which backed him in the race against Mr Johnson.

‘Despite being the outsider, the campaign was spirited & smart (if I do say so myself),’ he said.

‘I was truly humbled with the confidence placed in me by so many people.’

Mr Hunt has been a fixture in Tory governments since the start of the coalition in 2010 when he served as culture secretary. 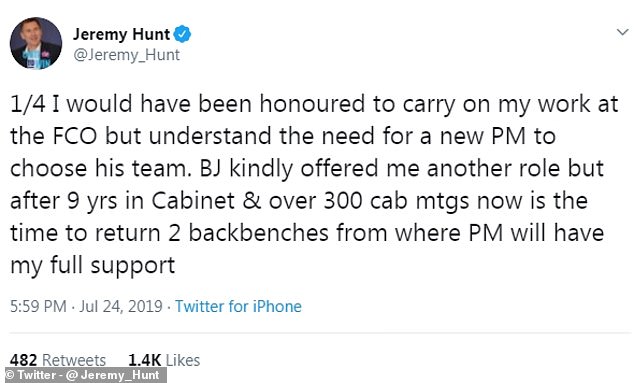 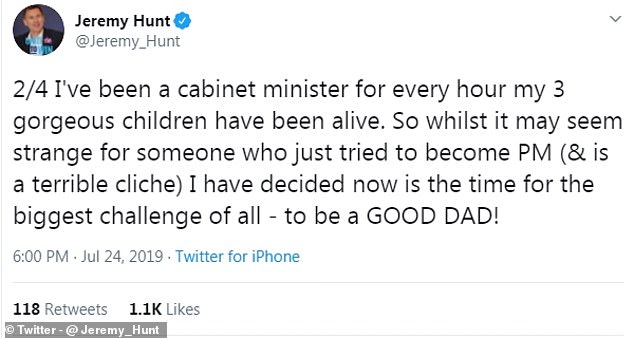 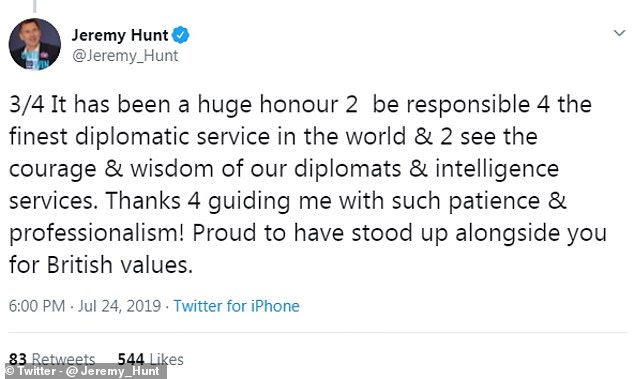 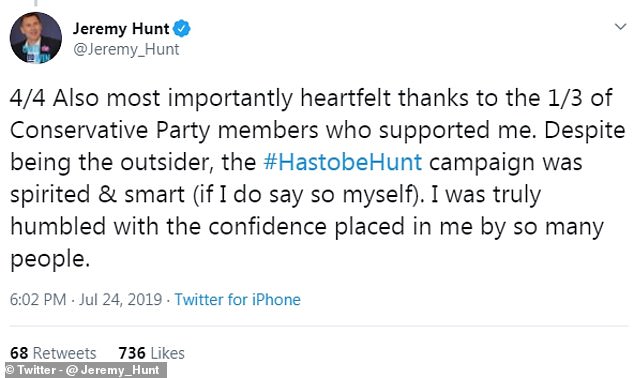 He then served as health secretary for almost six years before being made foreign secretary in July 2018 after Mr Johnson resigned from the role.

He was a self-described underdog in the race to succeed Theresa May as PM but his aggressive campaign surprised many in Westminster.

Team Johnson were believed to favour a head-to-head showdown with Mr Hunt over third-placed finished Michael Gove because they believed the latter would be a tougher opponent.

But Mr Hunt attacked Mr Johnson from the outset during the campaign as he labelled him a ‘coward’ over his failure to take part in more than two televised debates.

However, his insistence that he would agree to a further Brexit delay beyond October 31 if a new deal was in sight with the EU meant many Tory Eurosceptic activists could not vote for him.

They preferred Mr Johnson’s unequivocal ‘do or die’ pledge to take the UK out of the EU with or without a deal by the Halloween deadline.