Boris Johnson will address a powerful committee of backbench Conservative MPs this morning as he lays the ground work for a ‘People versus Parliament’ general election.

The Prime Minister is due to attend a meeting of the 1922 Committee in Parliament at 11.30am when he is expected to bang the drum for an early election.

His address will take place as speculation continues to mount that the PM will try again to prorogue Parliament.

Last night he dared opposition leaders to bring forward a vote of no confidence to try to topple him and trigger a snap poll but all of them said they will only try to get rid of him once a No Deal Brexit has been ruled out.

Despite the set back for Mr Johnson, Downing Street remains convinced that there will be a snap election sooner rather than later and potentially by the end of November.

As a result Number 10 is now moving into full campaign mode with Mr Johnson ramping up his rhetoric and Brexit attacks on Remainer MPs.

However, Mr Johnson is today facing a huge backlash after last night telling MPs that the best way to honour Jo Cox, a Labour MP who was murdered by a far-right terrorist, was to deliver Brexit.

He also appeared to dismiss MPs’ claims that incendiary language was putting their lives at risk.

Meanwhile, MPs are set to vote later today on whether to go ahead with a three day parliamentary recess next week which would allow the Conservative Party conference in Manchester to go ahead as planned.

But it is unclear whether opposition MPs will allow the Tories the time off as tensions continue to rise in the House of Commons.

The Tories have said the conference will go ahead regardless but the government is worried that without a recess opposition MPs could wreak havoc by forcing crunch votes in the Commons, forcing ministers and Conservative backbenchers to rush back to London. 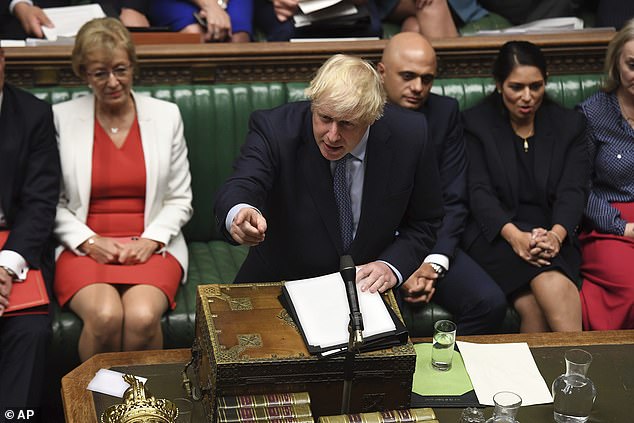 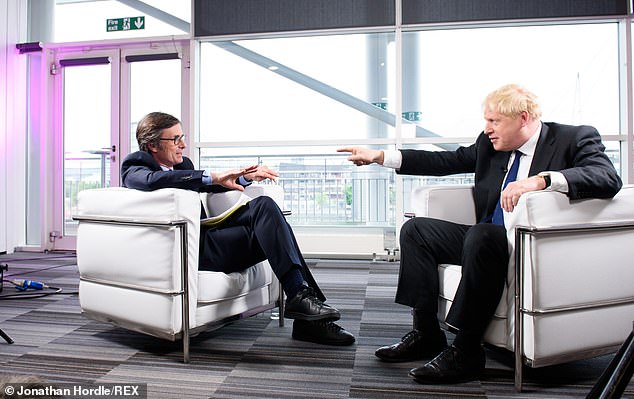 Mr Johnson is also facing fury after he suggested that he is drawing up plans to try to prorogue Parliament again.

But the PM has said he still wants to hold a Queen’s Speech so that he can set out a new domestic legislative agenda.

That raises the prospect of the PM trying to suspend Parliament for a shorter period of perhaps a week in a move which will spark anger among Remainer MPs who will argue they have only just got back to work.

Mr Johnson yesterday brushed aside demands for him to apologise over his failed prorogation as he recommitted to holding a Queen’s Speech.

He said: ‘I think we need a Queen’s Speech. We have a dynamic domestic agenda.’

Asked when he might move to trigger another suspension, Mr Johnson said: ‘I will be informing [MPs] as soon as we have assessed the meaning of the court’s ruling.’

He said: ‘I think the public should see what we want to do and I think it’s a great shame that the opposition are sort of gridlocked.

‘So my urging them would be: if you seriously don’t want to have an election, then let’s get on with a strong domestic agenda of the kind we have.’

Mr Johnson had challenged opposition MPs to bring forward a vote of no confidence last night as he said he would make time available for a division if any party wanted to try to get rid of him.

But none of the other parties took the bait.

Downing Street said that if MPs did not try to oust the PM then he would take that as a sign that Parliament does in fact have confidence in him and his Brexit strategy.

Number 10 said if no confidence vote was tabled then Mr Johnson would determine that he has a mandate from MPs to carry on as he sees fit.

The remarks were widely interpreted as a signal that the Prime Minister will try to prorogue Parliament again.

MPs will be asked to grant the Tories a three day parliamentary recess for the start of next week for the party’s annual conference.

Labour last night said it would ‘stand ready to work with the government to ensure that the Tory party conference takes place’.

However, shadow Commons leader Valerie Vaz did not commit to voting for a recess, something which has made ministers nervous of a potential ambush.

Jacob Rees-Mogg articulated the government’s concerns as he said: ‘I am very grateful for, though, I am sorry to say, slightly suspicious of, your offer that we could all go off to Manchester and business could carry on here if the business were desperately uncontentious.

‘There has been a recent habit for Standing Order motions to lead to legislation, and it would be a pity if the Conservative benches were empty because we were all in the wonderful city of Manchester.’ 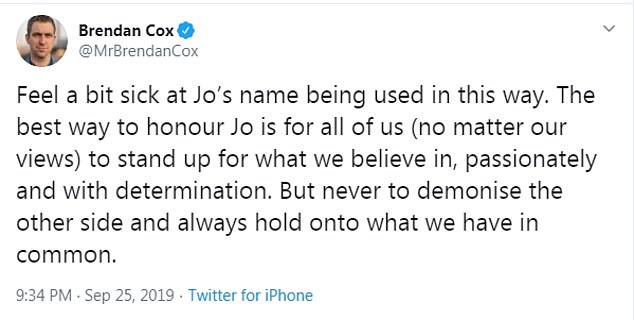 Mr Johnson sparked fury in the Commons last night as he said the ‘best way to honour the memory of Jo Cox, and indeed to bring this country together, would be, I think, to get Brexit done’.

He also dismissed as ‘humbug’ claims made by Labour MP Paula Sherriff that the ‘pejorative language’ he has used on Brexit was putting the safety of parliamentarians at risk.

Ms Sheriff said all politicians needed to ‘moderate our language’ as she pointed to Ms Cox’s commemorative shield on the wall in the House of Commons.

But Mr Johnson replied: ‘I have to say that I have never heard such humbug in all my life.’

The Prime Minister is now under intense pressure to apologise.