Smash it out of the park! Boris Johnson vows to end the UK’s ‘diet of misery’ and build up a fresh spirit of optimism if he becomes prime minister

Boris Johnson has vowed to end the UK’s ‘diet of miserablism’ and ‘knock it out of the park’ if he becomes the next prime minister as he took at a veiled shot at the leadership style of Theresa May.

The former foreign secretary said that throughout his political career he has ‘tended to go for my shots’ and that he would do the same as PM as he again reverted to a cricketing metaphor to criticise Mrs May.

He conceded that his aggressive approach meant that ‘sometimes I get out’ but insisted that Britain needed someone who was willing to ‘hit some runs’ in order to break the Brexit impasse.

Meanwhile, he also insisted that he was ‘not bluffing’ over his ‘do or die’ Brexit pledge as he said the EU needed to understand that he will be ready to walk away from the bloc without an agreement.

Mr Johnson has sought to differentiate himself from Mrs May throughout the race to succeed her as he painted himself as the dynamic and energetic leader the Tories need to reinvigorate the Conservative Party. 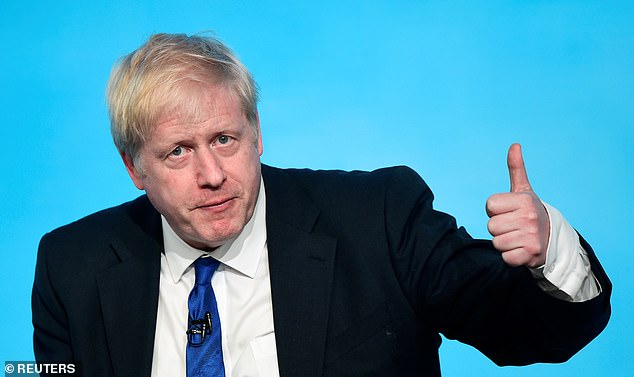 Boris Johnson, pictured at a hustings event in Cardiff yesterday, has vowed to ‘hit some runs’ if he becomes the next PM 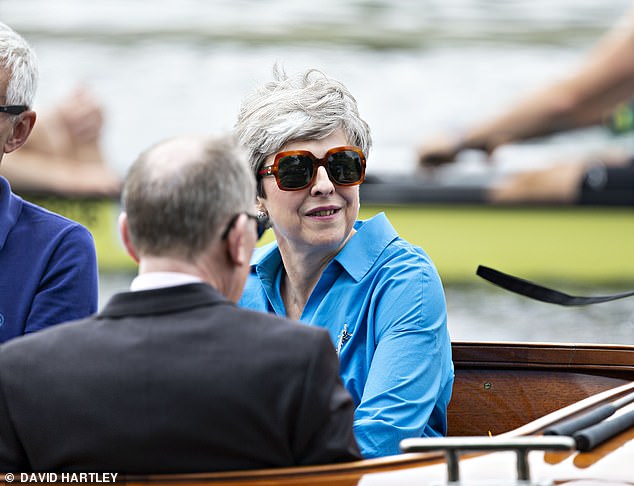 Mr Johnson’s comments will be seen as a veiled swipe at Theresa May, pictured yesterday at the Henley Regatta, who he suggested had a ‘computer says no’ mentality

He has repeatedly said at Tory leadership hustings events that the ‘hour is darkest before the dawn’ as he channelled the words of his hero Winston Churchill to inspire the party’s rank and file.

The former mayor of London used an interview with The Sunday Telegraph to suggest the current occupant of Number 10’s approach was like that seen in the ‘computer says no’ sketch from the BBC comedy Little Britain.

‘I think [over] the last three years, quite frankly, we’ve had nothing but a diet of miserabilism,’ he said.

‘And it’s really wretched. I don’t think that’s where people are at all.’

Mr Johnson said he would be a ‘different sort of prime minister’ and added: ‘Throughout my political career, I’ve tended to go for my shots. And sometimes I get out, and sometimes I hit some runs.’

He told The Sun on Sunday: ‘Let’s knock it out of the park. Well, I think, at least have a go.’

Mr Johnson used a cricketing metaphor earlier in his campaign to launch a coded attack on Mrs May’s leadership when he vowed to be more like Sir Ian Botham than Geoffrey Boycott if he wins the keys to Downing Street.

Mrs May is a well known fan of cricketing legend Mr Boycott who became famous for his conservative approach to batting and methodical scoring.

But Mr Johnson told Tory activists at a hustings event in Carlisle at the end of June that he intended to follow the example of Sir Ian who developed a reputation as a flamboyant and exciting all-rounder.

He said at the time: ‘I think that there is one way to do this thing now. If I may venture a cricketing metaphor, I think we’ve had quite a lot of Boycott on the wicket and it is time for Botham to come in. That is my view.’

Mr Johnson’s pledge to deliver Brexit by October 31, with or without a deal, has dominated the Tory leadership campaign so far with critics questioning whether he would actually go ahead with a No Deal split from Brussels. 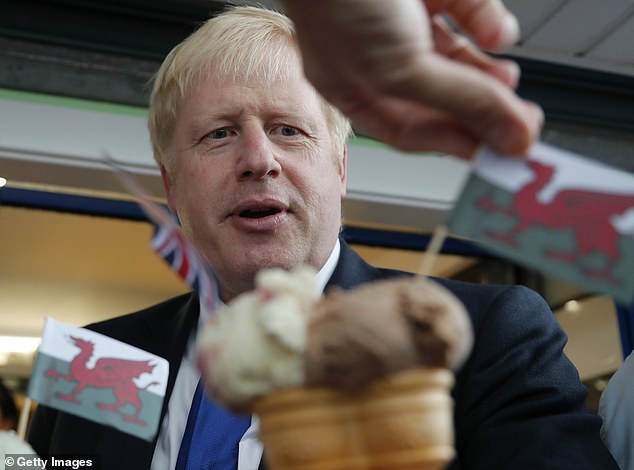 The former foreign secretary, pictured on a visit to Barry Island in Wales yesterday, said the UK needed to show ‘a bit more gumption’ on Brexit

But the prohibitive favourite for the top job has insisted he is serious and that he would be prepared to take responsibility for leaving without an agreement.

Asked by The Sunday Telegraph if he was bluffing over his October 31 hard deadline, he said: ‘No Honestly. Come on. We’ve got to show a bit more gumption about this.’

He added: ‘We were pretty much ready on March 29. And we will be ready by October 31. And it’s vital that our partners see that.

Both Mr Johnson and his challenger Jeremy Hunt have committed to keeping No Deal as an option.

But the Foreign Secretary has said he would be willing to agree to a further delay if more time was needed to strike an agreement with Brussels.